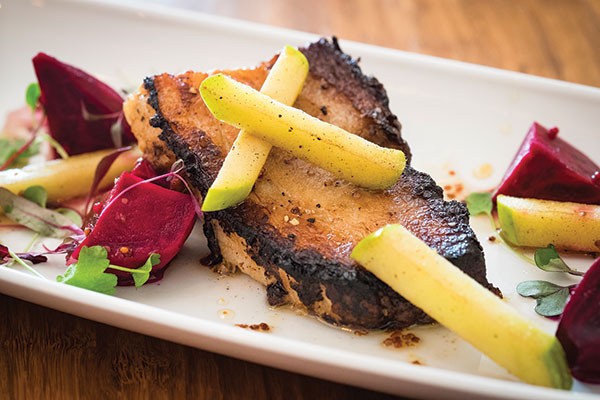 The name of Eighty Acres Kitchen and Bar — and its address, on the lonesome-sounding New Texas Road — might lead you to picture it down a winding country lane, surrounded by rolling fields or, perhaps, dappled woodland.

Actually, it's just off the Golden Mile Highway on the outskirts of Monroeville, surrounded by auto-parts stores and fast-food outlets. Chef/owner Don Winkie named the restaurant after his parents' farm in Kansas, evoking the idea of the farm-to-table ethos that the kitchen, with its local and seasonal emphasis, supports.

The rustic-chic dining room is right there, too, with broad, painted pine planks on the walls and an uncluttered smattering of antique decor. Chalkboards displaying daily specials and little vases of fresh flowers on every table serve as grace notes, underscoring the messages of warm welcome and freshly prepared food.

It's a sophisticated yet comfortable setting for Eighty Acres' offerings of straightforward, contemporary American cuisine. Most dishes involve a classic main ingredient — salmon, say, or pork chops — set off by just one or two distinctive flourishes, such as piquillo chimichurri in the first case or pineapple salsa in the second. This is a confident approach whose success comes down to flavor and execution. Working this way, a chef must have the discernment to make combinations both surprising and salutary, and the skill to cook such lightly adorned ingredients to perfection.

The first item we ordered, shrimp corn dogs, presented the first challenge: Could the kitchen really pull off such an absurd combination of delicate and coarse? Yes — with flying colors. Four skewers featured plump, sweet jumbo shrimp coated in a batter that was light like a good spoon bread, yet which fried up deep brown just like at the state fair. A remoulade flecked with roasted pimientos offset the shrimp with its own rich tang.

Crispy Brussels sprouts were not really very crispy, but we forgave them because their preparation, boosted by the unlikely trio of Parmesan, white anchovies and lime aioli, was so wonderful. The anchovies were not fishy, but provided deep bursts of umami, while the nutty cheese and tart, creamy aioli rounded out the flavor so that it seemed to hit every taste receptor.

Housemade ricotta gnocchi made for a mac-and-cheese that transcended nostalgia and approached the sublime. The gnocchi were fluffy but not insubstantial; the ricotta in them extended the cheesy goodness of the aged-cheddar bechamel sauce into the dumplings' very heart.

With so many good-looking "snacks," starters and salads, it can be tempting to compile an a la carte dinner from smaller plates, and Angelique did just that. Her mussels with butter beans, herb-roasted tomatoes and basil pesto was a deliriously satisfying dish. The big, creamy beans added textural variety, and juice from the tomatoes melded deliciously into the herbal pesto broth. A grilled baguette slice mopped up any broth that was left after the succulent shellfish and beans were gone.

A fried goat-cheese salad took its name from two balls of goat cheese fried in a crispy coating. These were as good as they sound, though the combination of pesto creme fraiche and balsamic reduction on the accompanying field greens was a little too candy-sweet for our tastes.

Jason went bigger, with the flat-iron steak entrée. The steak was exquisite — served in slices, its flesh pink within yet well charred on the outside — and a small side of creamed spinach was a simple delight, as was a finely diced mushroom tapenade.

But the roasted Yukon potatoes were uniformly, inexplicably underdone. It was a shocking oversight by a kitchen that, until that point, had proven nearly flawless.

A buffalo burger with fries showed that potatoes might the Achilles' heel of Eighty Acres, as the hand-cut fries were fully cooked, but only just; they were perfectly pale and, accordingly, bland. The burger itself was good, if a bit lean, as buffalo can be. Dill-pickle aioli was a clever condiment, subtle but effective, but the big ciabatta-style bun was awkwardly oversized and a bit doughy.

And yet: We found Eighty Acres to prepare some of the best American food in the city or its suburbs. Along with excellent service and a sophisticated, but not stuffy, atmosphere, this makes Eighty Acres equally suited to after-work drinks or a special occasion meal.