The pastrami is made from cured salmon, the reuben with smoked beets 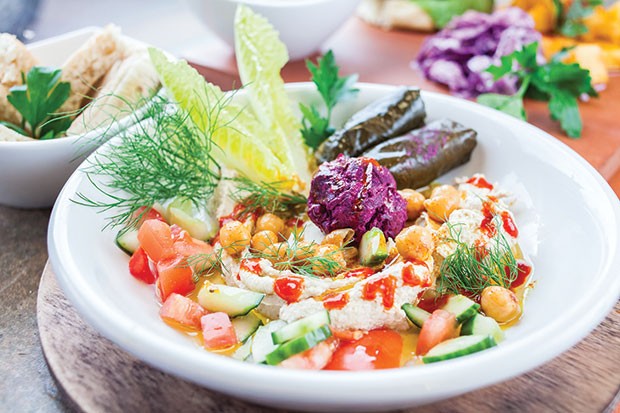 In some ways, Squirrel Hill’s identity as a Jewish neighborhood seems to be fading, at least along restaurant-lined Forbes and Murray avenues. One by one, we see kosher markets and delis replaced by Asian eateries targeting foreign students. But Pinsker’s, Murray Avenue’s venerable purveyor of Judaica, is betting that there’s still a hunger for kosher cuisine.

Specifically, in this era of foodies, global cuisine, and Jewish celebrity chef Yotam Ottolenghi, Pinsker’s bets that a broader approach to kosher food will appeal to Pittsburghers ever in search of unique dining experiences. In this spirit, Eighteen, a kosher wine bar and sit-down restaurant located in the storefront adjacent to Pinsker’s retail space, offers a variety of dishes not traditionally associated with Jewish culture, such as butternut-squash ravioli, pomegranate-glazed salmon and sushi, alongside classic Jewish-deli fare like bagels with lox and Israeli favorites such as hummus and shakshuka.

The common thread, aside from being prepared under the supervision of a rabbi, is fish. Aside from eggs, it is the only animal protein on the menu. Eighteen’s pastrami is made from cured salmon, its reuben is made with smoked beets, and there’s even a cheeseburger — with a house-made veggie patty.

It all adds up to a menu unlike any other in town. The space is distinctive as well. One could wait for a table in the front room for hours, if need be, and never get bored: The walls are lines with old local newspapers. Stained-glass windows from a synagogue in West Virginia hang, jewel-like, in the main dining room. We were seated in a charming, porch-like room-within-a-room strung with twinkle lights. It was busy the night we went, with a single, valiant and increasingly frazzled server hard at work.

He recommended the Dizengoff hummus, arrayed with olives, tahini, stuffed grape leaves, cucumber salad and a poached egg, served with a thick, pillowy, house-made pita, still warm. The platter was a great way to enliven the hummus — which, to be clear, was creamy and tasty on its own — with a range of complementary flavors and textures. The only flaw was that the egg had a sort of skin; for a moment, we thought it might actually have been cooked and served in plastic wrap.

Shakshuka, that wonderful dish of eggs poached directly in a spicy tomato sauce, was available in traditional, Greek (with feta and spinach) and Mexicali (with shredded cheese and jalapeño) varieties. We chose Greek, and it was wholly satisfying. Served directly in the hot, cast-iron skillet in which it was cooked, it showcased the simple pleasure of perfectly compatible ingredients heightened by a few, just-right seasonings and a restrained approach to innovation. The feta melted gently into creamy, salty pools in the hot tomato stew, while the spinach added color and subtle vegetal flavor.

Also served in its own cast-iron skillet, spicy Moroccan fish consisted of two filets of haddock stacked in the center of a tomato-based stew that was populated with chickpeas and potatoes. Jalapeños enabled this dish to live up to the “spicy” component of its name, but like the shakshuka, its seasonings were well balanced so that the whole dish sang in delicious harmony.

From the deli menu, we tried the reuben. It wasn’t bad but, in our opinion, didn’t quite work. First, the cheese, a fairly thick slice of Swiss, wasn’t well melted, and so formed a chewy, not gooey, chunk in the middle. But the real problem was the thinly sliced smoked beets. While they offered a pleasingly firm and substantial, if not actually meaty, texture, they were simply too sweet, with scant smokiness. The flavor of beets is not one that can masquerade as anything else, and it threw off the flavor balance of the whole sandwich.

Butternut-squash ravioli was described on the menu as coming “in brown butter sauce with raisin and walnut OR spinach in pesto cream.” This was confusing; brown butter sauce, on its own, is a lovely complement to autumnal ravioli. The pesto cream we chose was tasty, but there seemed more than enough of it for a double order of ravioli, and completely obscured any delicate brown butter that may have graced this dish.

Hardly a kosher cliché, sushi featured pretty good fish and well-seasoned rice that was pleasingly chewy without being gummy. However, the nori wrappers were chewy as well, as if they hadn’t been toasted in advance and then became sodden in the rice.

Eighteen offers a unique menu and memorable food that stand out in an increasingly homogenized dining scene of barnwood-clad, Edison-bulb-lit gastropubs.