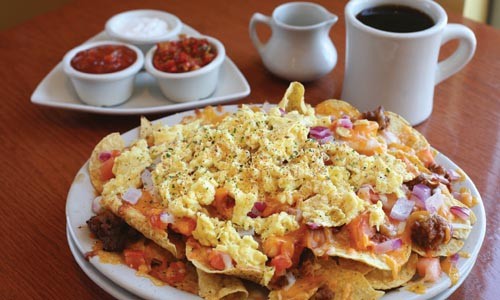 
The American diner is a cultural touchstone, a mid-20th-century concatenation of chrome, Formica and jukeboxes. They don't make 'em like that any more -- well, actually, they do, but we try to avoid those shiny, self-consciously retro recreations. Why go to one of those when there are still plenty of authentic diners out there? We know them not by their appearance, but by their food: sometimes greasy, often fried, always humble and home-style.

Eggs N'at is a diner occupying an innocuous little brick building painted scrambled-egg yellow in Moon Township. Its shtick is not nostalgia, but Pittsburghese. We felt sorry for our waiter, clad in a T-shirt that read, "Don't be a jagoff." Yet the building's interior is a surprisingly sophisticated space decorated with vintage LP album art. We sat out back on the deck overlooking the parking lot and, beyond, green fields and the airport control tower.

As a good diner should, Eggs N'at offers pancakes with a variety of flours, fillings and toppings. We ordered ours Mama Evans style: filled with blueberries and bacon. The cakes were of diminutive thickness but impressive diameter with a good, not-too-sweet batter. The blueberry-bacon combination within was smoky, sweet and savory all at once. Doused in syrup, this dish combines the pleasures of pancakes and breakfast meat for those who think pork and maple are a match made in heaven.

In more of a lunch than a breakfast mood, Angelique tried Eggs N'at's version of one of her favorite sandwiches, the Monte Cristo. A hallmark of this sandwich is bread that has been dredged in egg and fried, a la French toast. But here, the bread was merely toasted, giving the sandwich more of the character of a traditional club. It did pack a generous pile of turkey, tomato and cheese, but Angelique wished the menu had noted that the cheese was not merely Gouda, but smoked Gouda. A quibble, perhaps, but to a diner who dislikes smoked cheese, this simple word would have made the difference between ordering this or something else.

Jason tucked into one of his absolute favorites, "sausage gravy," more commonly called biscuits and gravy. At Eggs N'at, the emphasis is heavy on the sausage: a big bowl of chunky, creamy sausage gravy, with a slightly sweet flavor -- was it from maple sausage? Or sweet paprika? -- and just enough liquid to hold it together. The biscuits were ordinary, but their crusty exteriors and tender interiors held up well to the weighty gravy.

Jason followed up with another Southern-style classic, but one perhaps not as well known: muffuleta. This New Orleans sandwich is traditionally prepared using an entire round loaf of bread, layered with an array of meats, topped with an olive relish, pressed, then cut and served in wedges. Eggs N'at takes a more practical approach by using a crusty hoagie-roll base. But the stack of meats was appropriately varied, the melted provolone had plenty of presence, and the olives added flavor without dominating.

An even tonier and less traditional offering is the Crabby Benedict, which is just what it sounds like: a traditional eggs benedict topped with shredded crab meat. Here the success was also less complete, with a pedestrian English muffin as a base and the sauce -- which is traditionally Hollandaise -- rather mild and thin. Up against the stronger flavors of ham and crab, it added little. It did more for the side of home fries, which, sadly, needed it. The large chunks of potato were generally pale and decidedly undercooked inside, a far cry from the long-griddled, browned, crusty homefries that are the hallmark of good diners.

Déjà vu came in the form of French fries, which were pale to the point of appearing unfinished. Indeed, after several bites where the crunch was on the inside, we abandoned them. Which was a shame, because the fries at a neighboring table had looked so promising. Ours arrived late due to an ordering mishap, and had clearly been rushed -- a mistake that unfortunately exacerbated the prior one.

If those potatoes left a bad taste in our mouths, we could not let them overwhelm the many things that Eggs N'at does right. If were not such an oxymoron, we'd say Eggs N'at is a fine diner's diner.