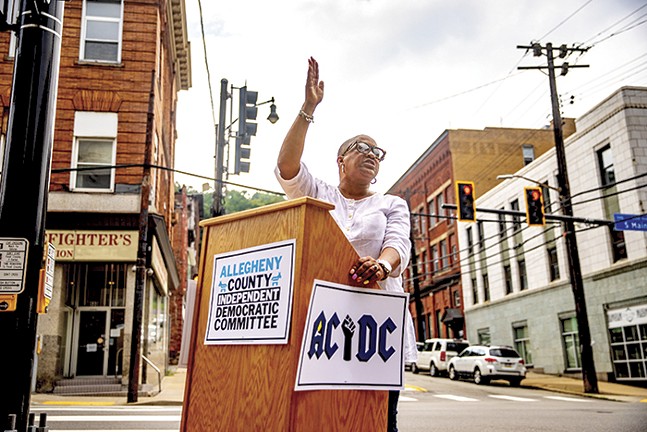 In the spring of 2020, the ACDC — which functions as the Democratic party’s local arm in Pennsylvania’s second largest county — endorsed a candidate for state house that had previously supported Republican former President Donald Trump, despite the fact that this news had been revealed a month before. The ACDC also failed to endorse state Rep. Summer Lee (D-Swissvale) — who is Western Pennsylvania's first Black woman to serve in Harrisburg — which broke a long-standing tradition of the committee supporting incumbents.

Pittsburgh City Paper revealed last year that the committee contained multiple Trump supporters, despite it being against the committee’s bylaws to support candidates of opposing parties. In the 2020 general election, Allegheny County Democrats lost a state house and a state senate seat to Republicans in an election where President Joe Biden performed better in the county than any Democratic presidential candidate in more than 50 years.

“Last November was a fucking bloodbath. It was unacceptable,” said Ross Tedder, who has worked on Lee’s campaign and other progressive initiatives in Allegheny County, while outside the ACDC headquarters on July 29.

Some active committee members believe the events were somewhat expected. To them, the ACDC had already lost its cachet as a group that actually wanted to elect and support Democratic officials, and was more used as a social club for longtime members.

But now, those committee members say they are done accepting that status quo, and are starting their own initiative to “break the Machine.”

About 50 people gathered outside of the ACDC headquarters in Pittsburgh’s West End on July 29 to rally for a new initiative called the Allegheny County Independent Democratic Committee, with the goal of building support to take over the ACDC from within and “break the machine,” as advertised on the event’s Facebook page.

Allegheny County Councilor at-large and committee member Bethany Hallam explained to the crowd, which contained at least a dozen current committee members, that the goal was to get as many new committee members on ACDC, and ones that share the same core Democratic and progressive values of “fighting for health care for everyone, a true living wage, infrastructure, equal access to education, LGBTQ and racial justice, and to fight for organized labor for every worker.” Hallam said many current ACDC members are out of touch with those values, and the ACIDC is about taking over the ACDC seat-by-seat.

“For those of you who want to make the world a better place, that is what we are building here,” said Hallam.

She told the crowd to contact at least four other people in their municipality or ward, tell them about ACIDC’s plans, and try to recruit them to run for committee members.

CP Photo: Kaycee Orwig
Allegheny County Councilor at-large and committee member Bethany Hallam
ACIDC is not about creating a separate political apparatus, it’s about building a new coalition within the existing structure of the ACDC, according to Hallam who said the “current structure could be used for so much more.”

ACDC members are either elected or appointed, and there are 1,322 voting districts, each of which elects two members. Hallam recognizes that some are already filled by good committee members who help local Democrats, but she is hopeful to find as many candidates as possible to run and fill those seats. The next ACDC election is in May 2022, and members are elected on the same ballot as other officials, like governor.

Hallam mentioned her effort last year to try to get ACDC to hold a committee-wide meeting after the scandals, but she was unsuccessful. She said ACDC needs more active and engagement committee members to thrive.

One of those members is Terri Minor Spencer. She serves as an ACDC committee member and has worked on progressive initiatives in the West End and throughout the county. She mentioned that there has been some success in getting new people elected to the committee — including nine Black women in 2018 — but there is a lot of work ahead.

“Most of the community doesn’t even know what this building stands for,” said Spencer, pointing at the ACDC headquarters.

Lee, a Democratic state house Rep. from Swissvale, has never been endorsed by ACDC, and told the crowd she was initially skeptical of attempts to take over ACDC from within. Lee started UNITE PAC in 2019, which backs progressive candidates who are usually ignored by more established political groups.

But eventually she grew to embrace the idea of ACIDC and told the crowd she sees an opportunity to make a difference.

“I also knew that if we are not taking power head on, then we are ceding it,” said Lee. “Until we dismantle the system, you have to work within the system.”

This September, ACIDC is hosting a convention to assess how much progress the group has made, and to launch a turnout campaign for the general election in November. ACIDC has also started a political action committee in hopes of raising funds for its efforts. Interested parties can fill out a form at bit.ly/idcjoin to learn more.