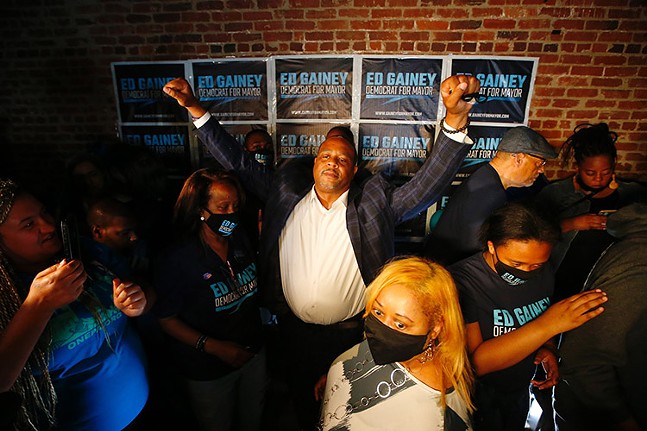 CP photo: Jared Wickerham
Ed Gainey celebrates his win during his Election Night watch party on Pittsburgh's North Side on Tue., May 18, 2021.
Pennsylvania state Rep. Ed Gainey (D-Lincoln-Lemington) has likely won the Pittsburgh Democratic primary, all but ensuring he will be the next mayor of the overwhelmingly Democratic city. Gainey will become the first Black mayor in Pittsburgh history.

Incumbent Pittsburgh Mayor Bill Peduto (D-Point Breeze) announced on Twitter  that he called Gainey to concede late in the evening on May 18. With more than 98% of the in-person ballots counted, and virtually all mail-in ballots in, Gainey has secured more than 46% of the vote in a four-way race. Peduto currently has about 39%,  former Pittsburgh Police officer Tony Moreno has 13%, and Michael Thompson, a math tutor and ride hail driver, has about 1%.


Gainey celebrated his win with friends and supporters at an Election Night watch party on Pittsburgh's North Side.

“I'm honored, humbled, and proud that the people of Pittsburgh have placed their faith in me by making me their Democratic Nominee for the office of Mayor," said Gainey in a statement. "This election made history, and I'm ready to go to work building a Pittsburgh where all can belong, contribute, and succeed.”

Gainey has served as state representative for the 24th Pennsylvania House District since 2013 and has become a well-known progressive ally on issues like criminal justice reform, marijuana policy, labor, public transit, and the Black Lives Matter movement.

He grew up in East Liberty and graduated from Peabody High School, which is now called Obama Academy. Gainey holds a bachelor's degree in business management from Morgan State University, a historical Black university located in Baltimore. He and his wife Michelle (Coburn) Gainey live in Lincoln Lemington and have three children.

Gainey’s campaign was focused on highlighting racial and economic inequities that have plagued Pittsburgh and advancing solutions to combat them. His biggest campaign promise was to re-initiate a lawsuit against the charity statues of large nonprofits like UPMC who don’t pay property taxes thanks to state law. He also wants to see a larger focus on affordable housing measures, including making the Pittsburgh land bank functional, and wants to institute a city-wide inclusionary zoning policy, and has criticized Peduto for not tackling these issues seriously enough.

The win for Gainey also comes up against considerable odds. As of September 2020, it didn't appear that Peduto would attract any legitimate challenger. And then in January 2021, Gainey announced with some early support from statewide union SEIU Healthcare and some progressive local elected officials, but he had a significant funding deficit compared to Peduto.

Gainey's win is also the first time in modern history that a Pittsburgh incumbent mayor has been defeated.