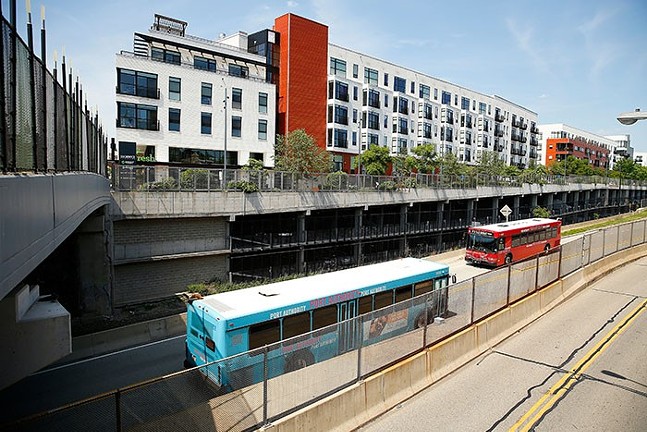 CP photo: Jared Wickerham
Apartment complex directly above the M.L.K. Jr. East Busway in East Liberty
President Joe Biden pitched his infrastructure plan in Pittsburgh earlier this spring, but since then, the proposal has hit some roadblocks in Congress. Some Congressional leaders are insisting on keeping the infrastructure package a bipartisan affair, but one area where Democrats and Republicans can’t agree is the percentage of funding given to roads and bridges versus given to public transportation.

The traditional split, which public transit advocates have long decried as already underfunded, is 80% to roads and bridges and 20% to public transit. Republicans, like U.S. Sen. Pat Toomey (R-Lehigh), think the 20% towards public transit is too high and should be lowered. Some Democrats have pushed back, while others have signaled some openness to negotiations.

But a new report might give some ammunition to public transit advocates and politicians wanting to maintain transit funding levels. Released on July 28 by advocacy groups National Campaign for Transit Justice and Just Strategy and Pittsburghers for Public Transit, the report shows that if Congress fully funds public transit, Pennsylvania would see economic boosts and environmental benefits.

The report analyzes nine metro areas in and bordering Pennsylvania - Philadelphia, Pittsburgh, Allentown, Harrisburg, Lancaster, Reading, Scranton, York, and Youngstown, Ohio. If the federal government were to provide an annual investment of $20 billion for transit agencies across the country, these metro areas would see a significant boost in transit service, which, in turn, would significantly boost those areas’ economies, says the report.

“This summer, Congress has the once-in-a-generation opportunity to make public transit work better for communities,” said PPT director Laura Chu Wiens in a press release. “This report shows clearly that such an investment would increase economic opportunity, racial equity, and help address the climate crisis. We need Washington to act, and fully fund transit. We cannot afford for them to miss this opportunity.”

In the borough of Braddock, for example, residents could see their access to jobs within a 30-minute bus ride increase from 5,402 to 11,754 jobs, according to the report. The report argues that increased service, especially to Black neighborhoods, will help increase the earning power of those transit users and, as a result, boost those regions’ economies.

In smaller Pennsylvania metros, which are home to many more Republican voters, the increased public transit funding would benefit them even more than larger metros that usually vote for Democrats. The York metro area would see its public transit service hours increase between 61% to 93% if Congress were to provide $20 billion annually for transit agencies.

The report also mentions the environmental benefit of getting more people to use public transit, instead of driving in cars.

“[Buses] often come through the community minutes from each other and if missed, community members have to wait sometimes up to an hour for another bus,” says Bennett. “Federal funding to expand transit service in this upcoming federal infrastructure bill would be life-changing."

Besides more than doubling the number of jobs she and her neighbors could access with a 30-minute bus ride, it would also expand access to food shopping, children's schools, doctor visits, and more.

Public transit agencies did receive significant funding from the federal government as part of COVID-19 pandemic relief. However, that funding was a one-time recovery effort, whereas the infrastructure bill being negotiated would provide funding levels for over several years. This is why advocates believe it is time to increase, not decrease the percentage of public transit funding.

“This disinvestment has deprived residents of the Commonwealth of the frequent, reliable, and accessible bus and train service they need to get to work and meet other day-to-day needs,” reads a press release. “The result is lost job opportunities, a setback in racial equity, and depressed economic activity for the state as a whole.”