Christopher Briem is an often-cited regional economist at the University of Pittsburgh's Center for Social and Urban Research. He authors a local blog, nullspace2.blogspot.com, and answers reporters' economic questions without making them feel too stupid.

What's the biggest misconception people have about the local economy?
Within the region there are a lot of pessimistic people, and I attribute that to being sort of a persistence of memory from what were very bad times in the past.

Steel was here for a long time, and there wasn't really any other dominant industry here, because there didn't need to be. So we didn't have a lot to fall back on when those jobs went away -- and they went away very fast.

But people outside the region are fairly positive about Pittsburgh. We get calls all the time from people asking what we did right.

People talk about Pittsburgh being full of old people. Should we worry about that?

We became old 20 years ago, because a big chunk of the younger generation left to find work somewhere else, and it takes decades to grow out of that.

But over the next 30 years, every other state has a higher projected growth in its elderly population than Pennsylvania does. A lot of that is that we're already kind of old, but the nation is going to look like us in 20 years. A lot of states are fearful of what that means, but we've survived. I don't think it's all that bad here.

Well, you hear people agonize over whether young people are leaving. Are they?

We are a college town these days, and so if you are a young college graduate here, you are faced with a market that is flooded with similar graduates. If you think there are not the same job opportunities here as elsewhere, you're right. That's what labor markets mean: If there's a lot of supply, you're at a disadvantage. But that's a reflection of what we're good at, which is producing college graduates

The conversation usually goes like this: Someone says, "My niece or nephew wanted to stay here, but they couldn't find a job, so they left." But the average 20-something college graduate moves; that's typical everywhere. Here it just always comes down to, "It's all Pittsburgh's fault." Because of this persistence of memory, people think it's the same story as it was 20 years ago. But it's not your father's economy. There's been an awful lot of change here.

What are some of the other big changes?

Probably the single biggest change in the workforce has been more participation by women. Manufacturing was a male-dominated industry, and these were good-paying jobs, which meant there wasn't the same pressure to have a second wage-earner at home. Plus, [steelworkers] often moved back and forth between daylight and evening shifts, which made it difficult to have a second wage-earner in the family, especially if you had children. One way or the other, women just weren't working, and that persisted for a long time. It's only been in the last few years that labor-force participation among local women has caught up to national trends.

There are more jobs now in Pittsburgh than there were before the collapse of the steel industry -- by far. People don't believe me when I tell them that, but it's true.

What local industries do you see as having real potential to grow the economy?

I think the biggest story right now is Westinghouse, and its decision to expand [its nuclear-power engineering operations] here. Lesson Number One in economic development is: "You should care about industries that are bringing income into the region." Industries that serve the local population are important, but promoting them doesn't generate new business. You're just shifting deck chairs on the Titanic.

Nuclear power, though, is servicing a worldwide industry. This is a very high-end business, with very high-skilled labor.

Are there other industries that might take root here?

I think there are a lot of things that may not really be big yet, but certainly have the potential to be big. Biotechnology is certainly big here, in an academic research sense. The potential is all there, and a lot of the pieces are there, but the challenge has been in seeing that become a commercial success -- having a lot of product development. If that happens, it could be another big plus for the region.

It seems like Pittsburgh misses out on a lot of economic booms, even if we don't get caught in too many busts any more either.

The benefit of a diverse economy is we're not going to diverge from the national trend that much. So if there is a national recession, we're certainly going to be impacted by it, but [during the steel industry's heyday], if the country was in a recession, the impact was magnified here. There's not one industry that dominates the local economy anymore.

Look: US Airways [which has cut thousands of local jobs in recent years] went away, and people talked about US Airways the same way they talked about US Steel. And it did pretty much get wiped out. But did everything get wiped out? If you lose your job, of course, unemployment isn't 5 or 6 percent; it's 100 percent. But by and large, we survived the collapse of US Airways.

The downside is, if there's a boom, and our economy looks more like the nation's as a whole, we probably won't boom faster than anyone else. But given our experience, that seems a pretty good trade-off. 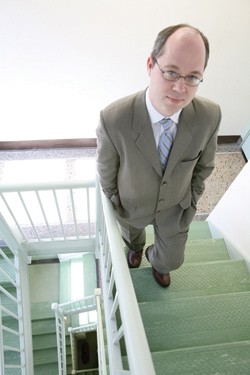