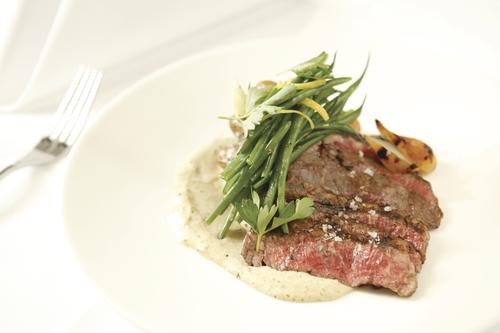 By now, of course, fine dining in the suburbs is old news. But transforming a white elephant of a failed chain restaurant, Hereford and Hops, into something unique and beautiful? Now that's impressive.

But perhaps not surprising, given the résumé of owner and executive chef Brian Hammond, who has worked with Grant Achatz and Rick Bayless, two of America's highest-profile chefs. Hammond remodeled the cavernous, multi-roomed building in Cranberry a piece at a time; the name derives from the acoustics of the room that once held brewing tanks. The results are a modern, organic aesthetic that combines polished chrome light fixtures with white walls, dark furniture and earth-toned art. The overall effect is both contemporary and comfortable. The bar and lounge area, with a freestanding gas fireplace, made us want to relocate for after-dinner drinks and dessert.

The menu, conceived by Hammond and executed by Chris O'Brien, late of Hyeholde, is a tour de force of modern American cuisine. It focuses on central ingredients (generally cuts of meat; there are few vegetarian options) and adds layers of flavor, sometimes in unexpected forms, such as a purée of tuna alongside grilled steak. It was a menu that made us feel we couldn't go wrong, and for the most part we didn't.

Service, which was friendly and helpful when needed and perfectly unobtrusive when not, began with portions of two kinds of bread: one a simple Italian-style loaf perfumed with rosemary, the other a cocoa-raisin bread that was intense with cocoa, yet scarcely sweet, a strangely addictive combination.

Minced ahi tuna tartare was heady with chili and lime -- a venerable combination evocative of both Latin and Asian cuisines -- and brilliantly accompanied by a tomato-kiwi salad, in which the fruits played off each other's sweet-tart profiles to enliven the meatiness of the tartare. A few thin, toasted slices of brioche evoked tortilla chips, but left us wishing for more.

There was no question of the right ratio of bread to toppings in the flatbread. Of the three available, we chose prosciutto-taleggio, two strong flavors beautifully offset by basil and preserved lemon. Perhaps inevitably, the ham and cheese made a salty combination, but the chewy-crisp crust provided plenty of support, and the lemon, basil and garlic brought a taste of the warmer seasons to a potentially heavy combination. Our only quibble was the lopsided distribution of the toppings, such that all the prosciutto ended up on one side of the plate.

Shrimp bisque was the closest Echo came to a misstep. Though its name suggested creaminess, the soup was more of a consommé, consisting of a clear broth studded with tiny bits of chili and meaty chunks of shrimp. The combination sounded luscious, but overall the flavors failed to come together, the peppers adding not quite enough zing while the shrimp floated in its broth, oddly isolated from its flavors.

Echo has a children's menu, and its version of that perennial picky kids' classic, buttered noodles, is only the best fettucine Alfredo we've ever had in a restaurant. Unlike typical American Alfredos, it was made with no cream, just butter and Parmigiano. Moreover, the pasta was fresh, keeping the dish light, tender and delicately eggy. It was a reminder that Alfredo should be richly flavored, but needn't be heavy.

Similarly, golden trout served on a bed of orzo with a fennel-cream sauce was masterfully executed, light yet vividly flavored. The beautiful filet was served flesh-down so that the perfectly crisped, still-golden skin wouldn't get soggy. The noodles beneath retained some chew, while the herbal cream sauce coated and enriched them without drowning the mild flavor of the fish.

Which brings us to a dining companion's pork tenderloin and belly. The pork belly was cooked brilliantly, the fat crisped, yet the meat within tender and moist. (If we had to guess, it was thoroughly cooked and then flash-fried.) All too often, pork belly is overcooked to take advantage of its bulletproof combination of fat and flavorful meat, but Hammond and O'Brien treat it with more respect than that.

Jason ordered skirt steak despite slight misgivings about the tuna purée. But the goal was not to create a weirdly updated surf-and-turf, but to enhance the fundamental meatiness of the steak with an extra kick of umami, just as Italian cooks sometimes add minced anchovies to otherwise fish-free dishes. The effect was successful, particularly as it played against the tender little fingerling potatoes and haricots verts, whose garlicky ramp-cream sauce could have been featured a lot more prominently.

Angelique's fresh papparadelle with shredded lamb benefited from the green notes in white asparagus and spinach, the subtle sweetness of finely diced roasted squash, and just enough astringency from roasted Roma tomatoes to create a dish of finely balanced complexity.

Fantastic desserts were a hallmark of O'Brien's tenure at Hyeholde, and that emphasis is replicated at Echo. Truffle brownie was as decadent as it sounds, counterpointed by two fruit-infused accompaniments: passion fruit caramel and mango-passion fruit sorbet. Stawberry-rhurbarb panna cotta was creamy, custardy and simply, yet richly, satisfying.

At Echo in Cranberry, two well-credentialed chefs have come together to create a superlative dining experience in a surprisingly sophisticated location.