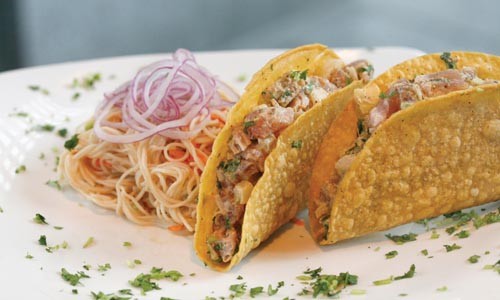 Grant Street is no Easy Street, as Angelique -- a veteran of Pittsburgh city government -- can attest. All the more reason a good watering hole is needed there, preferably one that also serves decent food to the lunch-hour crowd and appetizing dinners to any hardworking souls stranded in this gastronomically challenged corner of our city, far from the sparkling Cultural District dining scene.

Easy Street, a new venture by the proprietors of the Carson Street Saloon, is such a place. Located in the lower level of Oxford Centre, a comfortable walk in pumps from the courthouse and City-County Building, Easy Street consists of an indoor bar and restaurant. It also boasts that Holy Grail of Pittsburgh dining, an outdoor patio, whose sunken character provides welcome separation between diners and the honking, exhaust-spewing traffic of Downtown's major boulevard. (Smoking is permitted in the outdoor patio; when the sliding doors are open, smoke may drift inside.)

The establishment's very name suggests the loosening of ties, and the bland shell of the interior has been enlivened with a tropical theme that is about as far as you can get from the glass-and-granite halls of government. Yet the beachy atmosphere stops short of suggesting Spring Break; the ambience is casual, yet grown-up enough for a business lunch.

Easy Street's motto -- "Eat well. Drink better" -- led us to expect an emphasis on the bar before the kitchen, but we were pleasantly surprised by both the range and quality of the menu. Mexican and even Asian flavors have become pub-grub staples (nachos and satay, for instance). But Easy Street takes it to another level with a pork-belly sandwich and yellow-fin tuna tacos that straddle the Latin-Asian flavor divide. Less exotic fare is treated well, too: Pastrami is made in house, and the braised-beef sandwich features arugula, pickled onions and cambozola cheese, a cross between pungent camembert and tangy gorgonzola.

The only solution when faced with such a menu is to order early and often. While there were more unusual options for the pizza -- the special included pears, bacon and thyme -- we went for the classic pepperoni, albeit upgraded with fontina cheese mixed in with the mozzarella. This pizza was several cuts above standard Downtown lunch-slice pies. The crust was somewhere between thin-and-crispy and New York-chewy, and the marinara was light and fresh-tasting.

Fried calamari comes with a choice of three sauces. Two of them -- ginger peanut and spicy kung pao -- were equally intriguing, so our server offered to bring us both. The former was just what we'd hoped for -- enriched with earthy peanut but brightened by ginger -- but the latter presented not much more than salty soy and one-note spice. The squid itself was, as promised by the menu, lightly fried, with just enough coating to hold the sauces and protect the tender tentacles within.

The promise of harissa mayonnaise, flavored with the North African red chili paste, drew us to Easy Street's version of the ubiquitous crab-cake sandwich. Unfortunately, it was a disappointment. While it duly colored the mayonnaise a dark pink, the harissa made a minimal impression on the palate, and the crab cake itself, devoid of jumbo lumps and made with too much filler, had a fishy flavor that didn't belong. Furthermore, neither lettuce nor tomato were served alongside, although even the best crab cake benefits from their fresh, bright flavors.

Burgers are another bar-menu staple which disappoint as often as they satisfy. Some kitchens treat them as an obligation, while others recognize that just a little care will produce worthwhile specimens. Easy Street's Belgian burger, with wilted leeks and more of that heady cambozola, suggested that we'd experience the latter attitude, and we were right. The burger itself was juicy and tender, but it was the toppings that really shone. The leeks were generously heaped and gently sautéed, the cambozola asserted itself with plenty of creamy character, and the big roll delivered both a little chew and a little crust.

Angelique found the aforementioned tuna tacos an irresistible innovation. Chopped yellow-fin tuna sashimi was tossed in spicy sour cream with avocado, onion and cilantro. Tucked into crunchy taco shells, the combination of flavors and textures was both rich and bright, supple and crisp. An accompanying Thai noodle salad, lightly flavored with ginger, paled in comparison to the bold tastes and textures of the taco, an ingenious marriage of sushi and the traditional fish taco.

Easy Street serves up a winning combination of a tantalizing menu, generally excellent preparations, and an atmosphere that is relaxed -- and relaxing -- yet refined enough for a business meeting. With all this, not to mention what may be the best burger in Downtown, Easy Street makes it easy to forget whatever has brought you to Grant Street.