It’s a talky play with an explosive climax 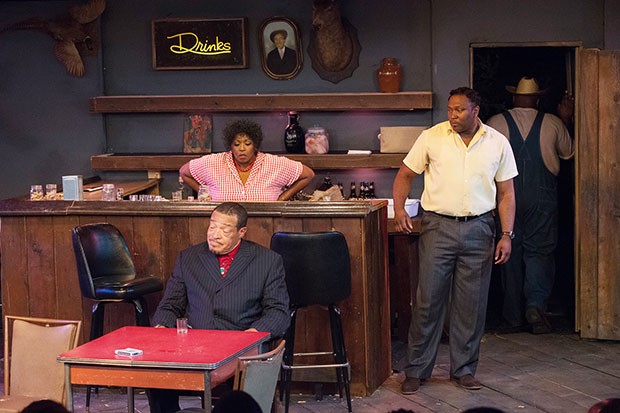 There actually are sausages called “East Texas hot links,” but Eugene Lee’s eponymous 1991 one-act is at least as savory, and often hotter, at Pittsburgh Playwrights Theatre Co. Local-actor-made-good Montae Russell directs a tight cast in a talky play with an explosive climax.

The year is 1955 — Jim Crow era, Emmett Till’s death a still-recent memory — in the “coloreds only” Top o’ the Hill Café. That name is a bit of a stretch for a “bar” serving only corn liquor, beer and peanuts. And a long line of troubles for the regulars to chew on.

East Texas Hot Links refers to the food chain, the hierarchy of “who eats, and who is ate.” Lee, a frequent actor in August Wilson’s Pittsburgh Cycle, took a tip or two from the master in crafting an ensemble with plenty of stories to tell and any number of grievances simmering under the surface. Columbus (a commanding Kevin Brown) has the fewest, with an outlook that counts life’s currency in people, not prices. At the other extreme is hot-blooded XL (Jonathan Berry succeeding against his usual, affable type). He wants More.

Fully entitled to her gripes is café owner Charlesetta (Cheryl El-Walker, sassy yet sage), not following her father’s footsteps in working to death for his little business, but with no vision for the future. On the other hand, Roy (the always-dependable Monteze Freeland) has big eyes for Charlesetta, a touch of nostalgia, and a serious pistol. The Wilsonian griot/seer role is shared by Adolph (the loquacious Leslie Howard), a blind World War II veteran who expounds on the food chain, and Boochie (a towering Charles Timbers), a professional gambler who can read palms and see the future. Also key to what plot there is are the youngblood Delmus (an energetic Taylor Martin Moss) and mostly-gentle giant Buckshot (Sam Lothard, explosive in threat mode).

There may not be a lot happening in East Texas Hot Links but when it does — wow.