The coq au vin was a rich, deeply satisfying stew that tasted like autumn in a bowl 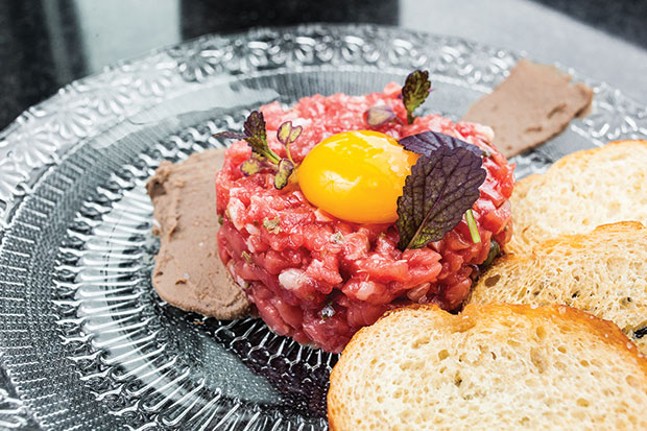 When chef Andrew Garbarino opened the Twisted Frenchman on South Highland Avenue a few years ago, there was no mistaking his ambition: In a culture where stuffy French restaurants have been supplanted by cozier, more informal cousins, Twisted Frenchman offered unabashedly fine dining. The twisted part was that Garbarino dared to apply molecular gastronomic techniques to the cuisine of Escoffier and timeless “mother sauces.”

Garbarino’s success has taken him, literally, to the next level. This year, he radically rebuilt a building around the corner, adding a second story and a second restaurant. Now upstairs on Baum Boulevard, the Twisted Frenchman offers exclusively chef-curated, multi-course tasting menus, while downstairs, the “upscale bistro” Bar Frenchman serves a traditional a la carte menu.

Bistros occupy a niche without exact analog in American restaurants, but with plenty of appeal; it’s no surprise we’ve adopted the word to connote simple sophistication. French bistro food may range from humble to exquisite, but the vibe is always comfortable and convivial, never somber. At Bar Frenchman, this translates to a dining room where century-old tile flooring has been preserved with cracks and pits intact, and a faintly rustic bar dominates one wall, while modernist light fixtures add an element of high design.

The menu offers four or five options in each of five categories: hot and cold starters, chilled seafood, steak frites, and entrees. The general approach is luxe preparations of elemental dishes. Thus, onion soup is topped with Bourgogne brie, not gruyere, and grilled prawns are served with a beet-root cocktail sauce. Only entrees are approached as updated versions of classics, like ratatouille, that eschew simplicity as a rule.

From the hot-starter menu, potato soup with leeks was superb. The vegetables were pureed to a silken texture and garnished, not mixed, with a small serving of succulent crabmeat and a swirl of fragrant tarragon-chive oil. This allowed the luscious flavors to remain intact, yet mingle, and for the diner to customize each spoonful.

Beet salad featured a classic combination of nutty, peppery arugula; savory lardons; and creamy, tangy goat cheese, all highlighted by a dressing made with aged French red-wine vinegar. Unfortunately, the beets were unevenly cooked, some perfectly tender, others borderline crunchy. If this was intentional, it was a poor choice, as the varying textures distracted from the perfection of the flavors. If it was an error, it was a surprising one, as beets are hardly tricky to cook. A grating of cured egg yolk on top was a nice thought, but didn’t have much impact amongst the salad’s other bold components.

Smoked-salmon rilette was served with a bit of impressive, yet ultimately disappointing, showmanship. A mound of flaked fish, folded with crème fraîche and shallot, was presented beneath a tumbler which, when removed, released a dramatic puff of smoke. The aroma, as well as the visual effect, were pleasing, but the smoke hadn’t imparted much actual flavor to the fish, and the end result was not far elevated above a good seafood salad.

When we’ve had steak frites in Paris, it’s been simply just that: a well-cooked steak, rarely a premium cut, alongside perfect fries. Bar Frenchman upgraded the steak in two ways: five different cuts were available, including venison and Japanese wagyu, and the steak was served atop a wild mushroom blend and wilted Swiss chard. We selected the least expensive cut, flat iron, and it was prepared beautifully — rosy red and lightly but thoroughly seared. The thinly-sliced mushrooms were wonderful, offering a gradient of textures from firm to silken, while the chard provided welcome vegetal notes without being too forward. Bone-marrow powder didn’t make a strong impression, but the demi-glace was a rich delight. Alas, alongside this sublime steak, the frites were merely ordinary, cut into narrow planks rather than batons. This is a technique that we find consistently lacking, for it leaves too many underdone bits and not nearly enough perfect fries.

Coq au vin was our best example of a classic French dish, prepared as beautifully as we would expect it to be in France. With the meat of a French rooster — not a supermarket hen — braised to succulence in Burgundy wine with tender root vegetables and served over mashed potatoes, this dish transformed ordinary ingredients into an extraordinarily rich, deeply satisfying stew that tasted like autumn in a bowl. A French autumn.

Bar Frenchman reminds that ambition need not be reserved for “fancy” food, but can elevate everyday recipes to memorable meals.