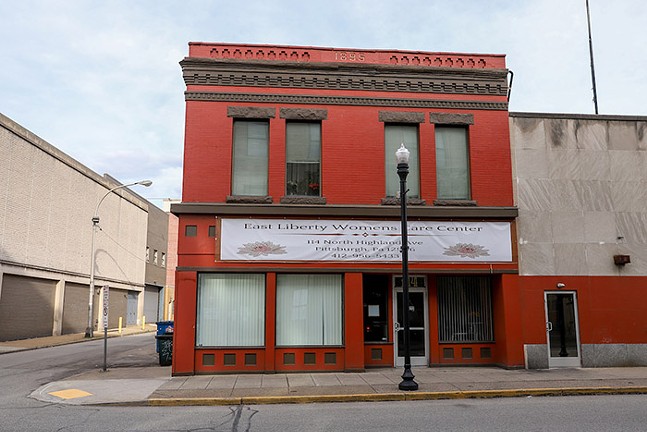 According to abortion care worker Crystal Grabowski, Women’s Care Center is just the latest in a long line of anti-abortion efforts known as crisis pregnancy centers (CPCs), what abortion-rights advocates call “fake clinics.” Grabowski says “fake clinics” are a common practice by churches, religious groups, and other anti-abortion organizations across the country. Their primary goal is not to provide sound, medical advice for people seeking pregnancy and abortion care. Instead, Gabrowski says, their mission is to advance an anti-abortion, often religiously motivated, agenda.

“They’re really banking on people not knowing what to do,” says Grabowski.

In Allegheny County alone, there are over a dozen CPCs, according to the Pittsburgh DSA Socialist Feminist Committee, with many featuring names with targeted language, such as Choices Pregnancy Center (South Side, Coraopolis, and Beaver) and the Women’s Clinic (Upper St. Clair/ Mt. Lebanon).

“They [CPCs] want to appear as close to an abortion provider as possible,” says Grabowski. 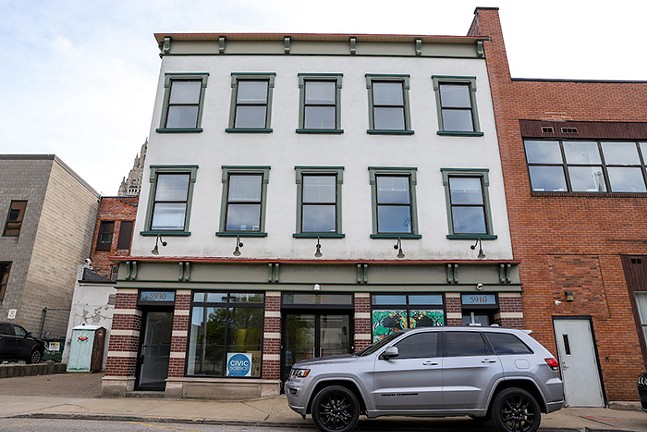 But the Gilberts view it differently.

They say the similarity in the logo is a “total coincidence.” Both Tiffany and J. Anthony say they didn’t notice the logo similarity until it was brought to their attention.

J. Anthony says they used the lotus flower in their logo because it looked “womanly.”

“There is nothing coincidental about that,” says ARHC’s Director of Nursing, Ryah, who prefers not to disclose her full name for personal safety reasons.

Although the Gilbert’s congregation, Another Level Ministries, is based in Mount Washington, they say the decision to open a facility in East Liberty was motivated both by the presence of ARHC and divine providence.

While it is not present on any of Women’s Care Center’s marketing materials or signage, the center is funded entirely by donations from individuals and other congregations, according to the Gilberts.

The opening of the center has been a long-awaited goal for the church, and “Women’s Care Center is an arm” of “Voices for the Unborn,” the ministry of Another Level Ministries, according to J. Anthony.

“We’re kind of keeping that a little under wraps,” says J. Anthony.

Still, J. Anthony insists the couple is “very transparent in our ministry.”

The Gilberts say they provide a variety of services to women in the center, including free pregnancy tests, ultrasound referrals, employment assistance, and material assistance.

However, the material assistance, especially pricier items such as cribs and strollers, operate on an “earn while you learn” system, according to Tiffany. If women are seeking these items, they must participate in free “courses,” in exchange for the item. Each item has a certain number of course hours that transfer into credits that can then be exchanged for needed goods.

The required courses, which were developed by the Gilberts as part of their church’s practices and doctrine, also feature “practical life lessons.” While women can opt out of the religious elements of the course, according to Tiffany, they must complete courses to obtain these larger items.

CP photo: Kaycee Orwig
The lotus flowers used in the logos of both businesses
Ryah is skeptical of these “learn to earn” practices.

“It seems like this ‘learn to earn’ is going to be 100% biased,” says Ryah, urging those seeking care to find sound, medical advice from legitimate medical providers.

J. Anthony says the center is not a medical clinic, but they will provide ultrasound referrals to their partner Women’s Choice Network — another organization deemed a “fake clinic” by Pittsburgh DSA Socialist Feminist Committee.

“If you want to have an abortion, you don’t need an ultrasound beforehand,” says Grabowski.

Grabowski says, when seeking out abortion care and pregnancy options, to look for “red flags.” She says one of the most common tactics of these organizations is to paint a “scary” narrative of pregnancy. According to Grabowski, CPCs may use language such as “Scared? Confused? We’re here to help,” language that is present on the home page of Women’s Care Center’s website.

“Ask ‘do you perform abortions?’ when you call,” says Ryah. “If they say no, they will try to convince you not to have it.”

For Grabowski and Ryah, the tactics CPCs use are deeply aggravating, as both say they seek to confuse or provide misinformation to people in need of pregnancy and abortion care.

“Every person when they’re seeking health care deserves comprehensive information from someone who knows what they’re talking about,” says Grabowski.