1435 Bedford Ave., Hill District. thesoulpitt.com
The Soul Pitt posted on their Facebook page that a new restaurant Eminent Cafe will be coming to Pittsburgh soon. The only thing we know so far is from the poster which features a delicious-looking sandwich and an address. Watch the Soul Pitt page for more news.

2401 Smallman St., Strip District. wiglewhiskey.com
In its first cross-state collaboration, Wigle Whiskey brings us its Pennsylvania Peach whiskey in conjunction with Tröegs Independent Brewing. The process behind the spirit sounds delicious: first, the whiskey is distilled from regionally grown wheat grain, aged for four years in charred oak barrels, and then transferred to Tröegs and steeped with peaches and apricots. $1 from each bottle will go toward Feeding Pennsylvania’s mission to connect food-insecure Pennsylvanians with surplus from local farms. 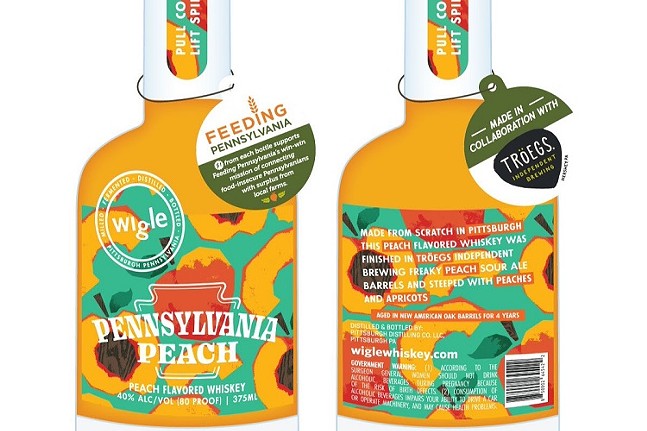 1500 Chateau St., Strip District. laprima.com
La Prima has teamed up with 412 Food Rescue to bring us the 412 Food Rescue Hero blend. The blend is a light-medium roast with tasting notes of pineapple, dried fig, and pumpernickel. $1 from each pound sold goes to support 412 Food Rescue’s initiatives.

209 Mall Blvd., Monroeville. pittsburghvegan.com
Started by Pittsburgh’s own Amy “Amethyst” Cottrill, the original Pittsburgh vegan festival began in the '90s and has continued since then. Kids get in free, and tickets are $4 in advance and $5 at the door. From 12-5 p.m. on Sat., July 24, enjoy the best food from desserts to potato pierogies made the vegan way. Check out the extensive list of vendors on their Facebook page.

232 S. Highland Ave., Shadyside. millieshomemade.com
Millie’s dropped a new ice cream flavor last week. Honey Baklava is a honey-based dairy milk ice cream with chunks of baklava pastry woven throughout. The dessert is available for purchase at the South Fayette, Market Square, Shadyside, and Lawrenceville locations. Check the Millie’s website to make sure it's still available before showing up.

147 Julius St., East Liberty. eastendbrewing.com
East End Brewing has reopened its fully operational kitchen. With restaurant veteran, Sheryl Johnston, at the helm, what's been dubbed as East End Chewing is focusing on “rustic, thick-crust” pizza and changing it out weekly for a “pizza of the week” feature. Don’t worry veg-heads, there will be vegetarian and vegan versions for you.