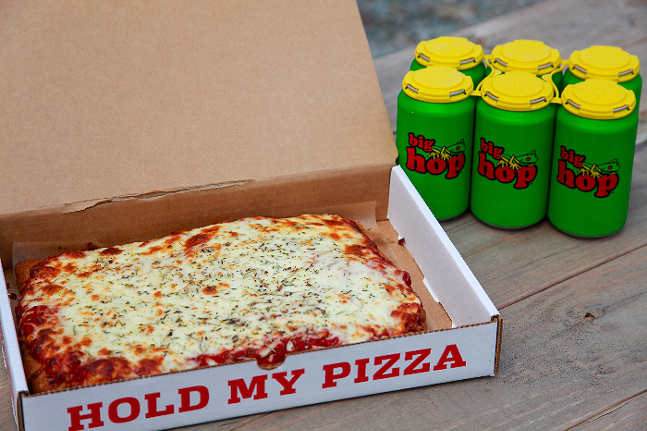 East End, located in Larimer, reopened their doors a few months back as coronavirus rates began to decline. As customers came back to sip on local craft beers, the brewery was missing a food option for guests after the departure of an on-site restaurant. Wanting to keep providing hot food to patrons, the brewery created East End Chewing, which includes an expansive pizza menu, as well as some other items.

“We’re keeping the menu pretty simple, focusing on a rustic, thick-crust pizza, that we offer in just a few configurations at a time: a classic cheese pizza, a pepperoni pizza, and our ever changing Pizza of the Week,” head of East End Chewing Sheryl Johnston said in a press release.

Each week, East End Brewing will implement a new “Pizza of the Week” to their condensed menu. So far, the pizza menu has included a variety of unique pies like Bahn Mi sandwich, eggplant parmesan, Reuben, and pierogi pizza, among 30 others.

For those with dietary restrictions, vegetarian and vegan pizzas are available to order.

East End Chewing has a few other food options available on their menu besides pizza, including a large soft pretzel paired with Big Hop beer mustard, breadsticks, tahini cauliflower salad, and pickled vegetables.

The East End taproom used to host a variety of hot food vendors to feed beer fans, and, for some time, the restaurant Larder was placed inside the taproom. Larder closed in August 2020.

East End Brewing is currently in the process of highlighting the 90 neighborhoods that create Pittsburgh with a craft brew inspired by each location. And East End Brewing owner Scott Smith said in a press release that neighborhood-inspired pizzas are a possibility in the future.

"I'm not saying we're committing to make a completely unique pizza for each of Pittsburgh's 90 neighborhoods just yet, but I suppose if we can do it with beer, pizza would not be impossible," said Smith. "So maybe check back when we’re 90 weeks into this? Sheryl has already created more than 30, one per week. So it could happen!"