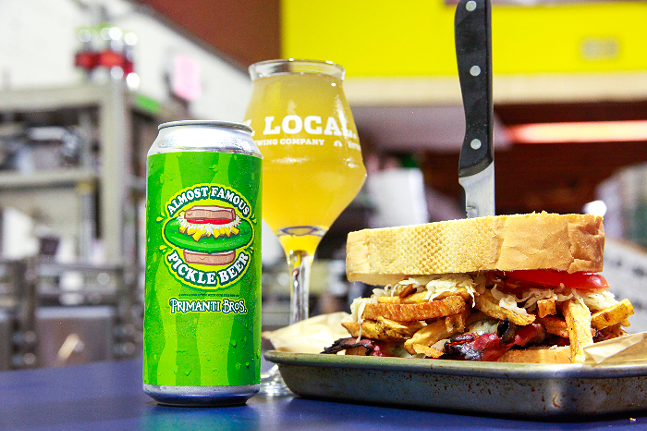 Photo: courtesy East End Brewing
The Almost Famous Pickle Beer next to a Primanti Bros sandwich
Two Pittsburgh institutions, Primanti Bros and East End Brewing, are collaborating once again to bring back their popular brew, Almost Famous Pickle Beer, just in time to get excited for the return of Picklesburgh, which kicks off on Aug. 20. And this year, the popular brew has a new recipe.

The pickle beer only appears once a year and tends to sell out quickly. The briny, yet surprisingly refreshing brew is available for sale at some Primanti Bros restaurants across the region and the East End taproom in Larimer.

This 2021 batch contains 1,600 pounds of fresh cucumber that were prepared and juiced by East End Brewing. The beer then faced an intense brewing process with additions of classic pickle ingredients including dill, sea salt, and peppercorn. However, for the first time ever, the beer contains a citrus flare with the addition of lemon.

“The fresh ingredients and addition of lemon this year give the beer a tart, yet sessionable, profile. And of course — it pairs perfectly with a Primanti Bros. pastrami and cheese,” said founder of East End Brewing Co. Scott Smith in a press release.

In previous years, the Almost Famous Pickle Beer has sold out in less than 48 hours. And while this year is the largest volume in the brew’s history, the supply isn’t predicted to last long.

“Each year this beer is a favorite,” said Jim Prezioso, Senior Marketing Manager, Primanti Bros in a press release. “It’s a reminder to hang on to the end of summer, slow down and enjoy a little bit of Pittsburgh.”
East End Brewing: 147 Julius St., Larimer. eastendbrewing.com
Primanti Bros: Multiple locations. primantibros.com

5 places serving cocktails with the ingredient of the season: rosemary