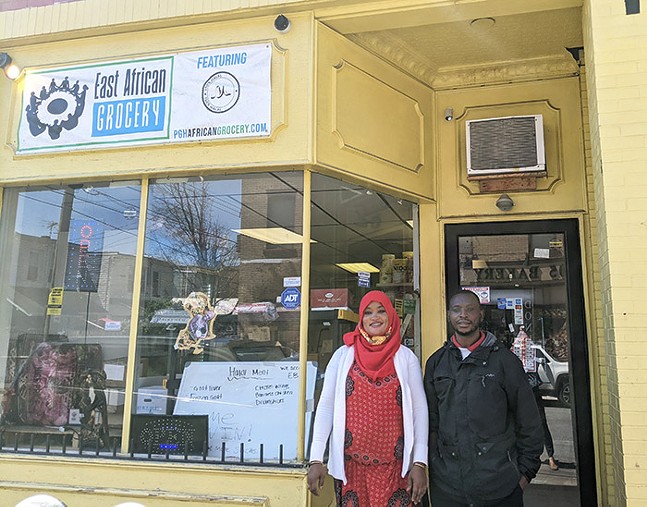 Photo: Courtesy of Just Harvest
Abdulkadir Chirambo, right, and his wife pose in front of their East African Grocery store in McKees Rocks.
Finding East African staples and clothing in Pittsburgh is not easy. Members of Pittsburgh’s Somali Bantu refugee community usually travel three hours west to Columbus in order to find the garments, spices, and other ingredients they are accustomed to.

Abdulkadir Chirambo realized how often he and other members of the Somali Bantu community were doing this, and decided there was an entrepreneurship opportunity to open a grocer and shop catering to these desires.

But it hasn’t been easy sledding for the African grocery. Chirambo says the coronavirus pandemic delayed several renovations the space needed to go through before he opened. This meant waiting months to bring plumbers in because of business closures. And even after Pennsylvania loosened restrictions, Chirambo says it took another six weeks to finally get an appointment for electrical fixes and other maintenance. 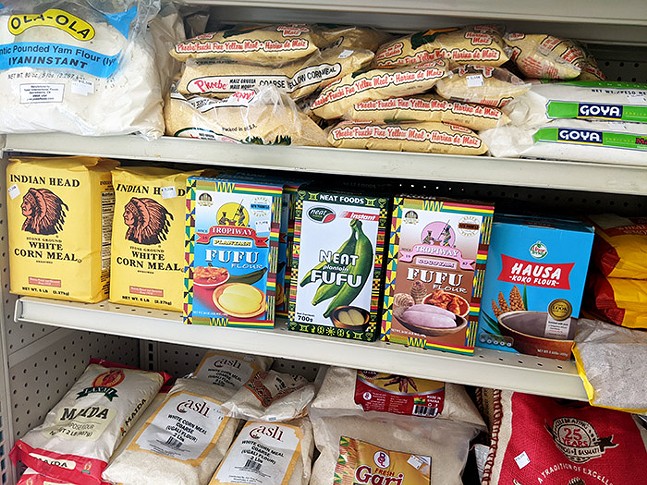 Photo: Courtesy of Just Harvest
Groceries for sale inside East African Grocery in McKees Rocks
Even through these delays, Chirambo says he still had to pay rent. And when he finally opened in November 2020, he says many of his potential customers, people in Pittsburgh's African community, were and are still out of work.

“When I opened this store, customer wise, we were very limited. Not a lot of people in the community had jobs,” says Chirambo.

He says some younger men in the refugee community were finding work in manufacturing and health care industries, but older workers who usually worked in restaurants and hospitality were struggling to find work.

But that doesn’t mean there wasn’t demand for products in his store. Chirambo says there are several Somali Bantu families who now live in McKees Rocks, and there is a small but growing African community there, including Nigerians and others from West Africa, too.

Though Chirambo is hoping for more customers to visit his store, which he runs with his wife and his nephew, East African Grocery has garnered support from local nonprofits like Just Harvest, which designated East African Grocery as one of its Fresh Corners stores in January.

A statement from Just Harvest says Chiramo has a “winning combination of fresh produce, specialty goods, and a desire to bring the community together."

“Corner stores can play a critical role in addressing the lack of healthy food access in underserved communities,” reads the Just Harvest statement. “This is especially true during the pandemic, when having to take public transit to get to a grocery store is not only cumbersome and expensive, it can be risky to one's health. Having nutritious and culturally familiar foods in walking distance shouldn't be a luxury.”

Despite the early struggles to bring in enough customers and keep East African Grocery open, Chirambo says the store has products that everyone will enjoy, not just African immigrants and refugees. He says his spice blends are very unique to a Western Pennsylvania palate, and specialty Somalian coffee and chai teas should be sampled by all.

Chirambo also hopes to keep the lights on so that he can expand to create a kitchen to sell East African cooked food. East African Grocery currently sells fresh produce, and if they are able to stay open, plans to sell produce grown locally by the Somali Bantu community. The refugees run a small farm in Northview Heights and a larger farm in Mercer County.

“We have different spices, we have something different than American spices,” says Chirambo. “If people are willing to test something different, we will accommodate them.”East African Grocery 1008 Dohrman Road, McKees Rocks. Mon.-Fri. 10 a.m.-9 p.m. Sat.-Sun. 8 a.m.-8 p.m.