Here, traditional homey dishes get amped up with lots of ingredients 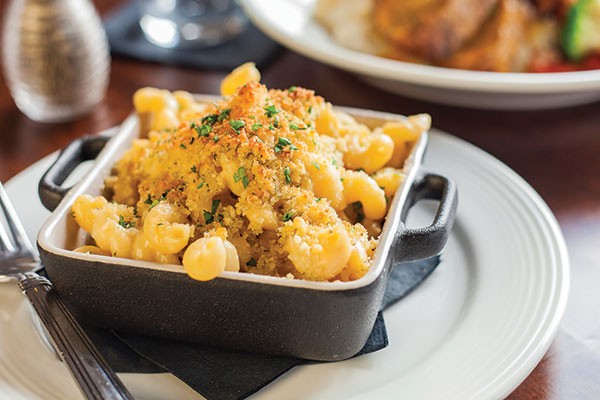 There is an old saw that every 20 years, clothes come back into fashion. But really the cycles of fashion rhyme rather than repeat. Similarly, in art and architecture, long cycles of increasingly florid design eventually lead to an austere reaction.

In the world of food, after the 1990s soared to an apex of fussiness with sundried tomatoes and pink peppercorns everywhere, austerity has arrived on two parallel tracks. Contemporary American cuisine emphasizes fresh, local and simple dishes on the assumption that great ingredients need little elaboration. At the same time, homey comfort foods such as mac-and-cheese, meatballs, burgers and poutine have invaded the menus even of finer establishments, while the impulse to upscale their ingredients has given rise to a whole new genre, the gastropub. And so, fussiness has crept back in, as mac-and-cheese goes from guilty-pleasure throwback to medium for the meat du jour, be it bacon or pork belly, and burgers become artisanal towers of top-shelf meats and toppings.

American cuisine may be entering its own baroque period, possibly shading into rococo. A case in point is Regent Square’s newest restaurant, Ease Modern Comfort Cuisine. Ease embraces current trends, with ostensibly straightforward, once-humble recipes accruing ingredient upon ingredient. Its basic offerings — poutine, pot stickers, shrimp and polenta, and, of course, mac-and-cheese — would have been, if not cutting-edge, at least refreshing half a decade ago. But now the pot stickers get lobster filling and a lemongrass aioli; there are four choices of mac-and-cheese; and the poutine stretches the definition pretty far, with tater tots replacing French fries and duck demi-glace as gravy.

Chef-owner Jimmy Brown’s background is in white-tablecloth dining, including Luma, in Aspinwall. But with that going out of fashion, what’s a chef to do? At Ease, Brown creates a composite menu that skews casual, with some classic upscale entrees like beef stroganoff and sesame ahi tuna.

Brown has created an ideal neighborhood place, casual enough for watching the game at the small bar or catching up over a friendly dinner, and formal enough for a celebratory family meal. But the execution at both ends was spotty. Kale Caesar salad in a Cajun dressing with cornbread croutons featured insufficiently tender kale, a dressing more pasty than creamy, and crumbly, bland croutons. Lobster potstickers had thin, wonton-like wrappers that didn’t have enough heft to withstand pan-frying. They ended up a bit tough and dry, while the lemongrass aioli, while it tasted good, was a bit coarse.

The tater tots in the poutine were excellent, but the duck demi-glace was too subtle to have much effect, and the duck confit wasn’t as meltingly tender as it should be. It was not a failed dish — the smoked cheddar was a nice counterpoint to thin slices of raw serrano pepper — but neither was it a ringing success.

The same could be said of the stuffed meatloaf, where a promising blend of buffalo, beef and pork surrounded that same smoked cheddar, and which was glazed with orange and chipotle. But the meat ran a bit lean and the cheese a bit scant, and while the glaze was pleasingly subtle — far better than a heavy glop — there was not quite enough to make a firm impression. The accompaniments of garlic mashed potatoes, a veggie medley, and garnish of wild mushroom and frizzled onion simply overwhelmed the faint flavors of the loaf.

The meatloaf also made a cameo appearance in mac-and-cheese along with roasted chicken breast, beer-braised short ribs and a sriracha crust. The combination of smoked cheddar, fontina and parmesan cheeses was mild and not overly rich, perhaps in attempted deference to the meat, and the sriracha so restrained as to be not really detectable in the bread-crumb crust.

Shrimp and polenta had the lusciously creamy, succulently meaty quality of shrimp and grits, accentuated with jumbo-lump crab meat, grilled broccolini and garlic-herb butter. These additions were fine, but the essential dish would have been great without them: the shrimp plump and lightly, deliciously charred, the polenta porridgey and richly swirled with smoked-cheddar cheese.

By Ease’s standards, this was a simple dish, and it was the most successful we ordered. In others, a lot of effort seemed to go into amping up recipes that didn’t repay it. Perhaps it is time again for chefs to interrogate their ingredient lists and figure out where to go for broke, and where to hold back.