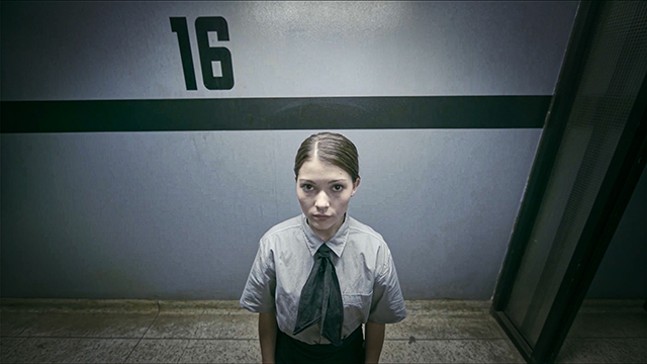 We reached the oversaturation point of bleak dystopian movies long ago — there can only be so many worlds that are like ours, but grayer. But works like The Handmaid’s Tale adaptation on Hulu have inspired a slew of new and terrible worlds. In sci-fi drama Level 16, director Danishka Esterhazy creates yet another world where women are trapped against their will only to have their bodies used without their consent.

The Vestalis Academy is a boarding school that raises girls from a young age until they’re teenagers with the promise of getting adopted by a rich family at the end. The “school” is clearly an actual prison with gray walls and dim lighting, where the girls are told to scrub floors, take mysterious vitamins, and are never allowed outside. The whole institution is obsessed with making “clean girls” who maintain their “feminine virtues” and must constantly recite the academy’s tenants: cleanliness, obedience, patience, and humility.

Feelings like anger are considered a vice. The girls have never been outside because they’ve been told the air is poisonous. Once a week, they have “moving picture night,” where they watch the same old Hollywood movie. None of them know how to read.

Vivien (Katie Douglas) has just been moved up to Level 16, the final level of the academy before their foretold adoption. She believes wholeheartedly in following the rules, reciting the virtues, and being the cleanest girl possible. But when she rooms with Sophia (Celina Martin), a friend from a previous level, Vivien learns the academy is not what it seems. Eventually, they discover the truth, that it’s not a school; the girls are being raised like cattle for a shocking purpose (it’s not to give birth).

Though it aims to shock and provide some sort of social commentary on how women and girls are treated, it doesn’t quite land the punch. There is obvious inspiration from past dystopian works that managed to offer in-depth criticism and nuance, like Handmaid, or Kazuo Ishiguro’s book/movie Never Let Me Go, or even Get Out. But those works have complex world-building, creating a universe that holds a distorted mirror up to reality. But the world in Level 16 feels like it was created because it’s trendy right now to make art about repressed women.

Vivien doesn’t question anything about the academy until Sophia tells her to. In fact, none of the girls seem to question anything about the school, why they’re there, or what else is out there. This goes against usual dystopian stories in which characters are revealed to have been privately curious, even if they’re publicly obedient. But this is also antithetical to the nature of teenagers, especially teenage girls, who are naturally curious.

Any questions or hesitations they do have are immediately quashed by Miss Brixil (Sara Canning), a boringly evil bleach blonde headmistress. There is no glimpse into the outside world’s relationship to this academy, and it’s unclear whether this academy is socially accepted, or whether it’s an underground science project. There’s no explanation as to where these girls came from, who’s running the sinister program, or why everyone speaks English, except for the guards and cops who speak Russian.

The dystopian genre can offer useful, biting, and poignant criticism of the real world, but Level 16 is another example of how exhausted the genre has become. There’s no good reason why every dystopian story should be set in a bleak, gray world. Dystopias can exist in the sun, too.