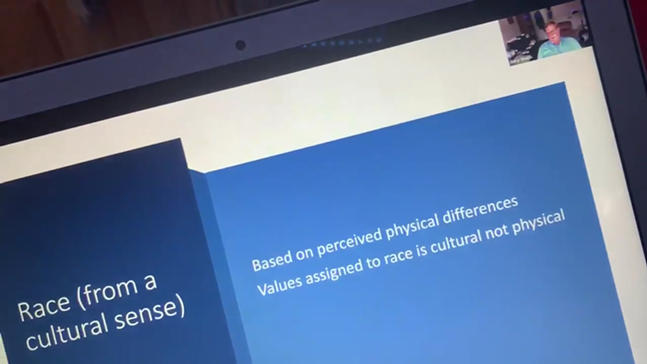 “And that word is [n-word]. OK? When I was a young man, alright? That was a very commonly used word,” said the professor, according to the video.

“You know what Brazil nuts are, right?” said the professor.

“Yeah,” responds a student in the video.

“When I was a kid, people called them [n-word] toes. Could we do that nowadays?” asked the professor.

“No, absolutely not,” said the student.

“Absolutely not. Um, when I had a little extra money and I was spending it extravagantly, somebody might say I was [n-word] rich. OK? Would we do that today?” said the professor.

“No,” replied the student.

“No," said the professor.

As of today, that faculty member has been placed on paid leave, and the university is investigating the matter, according to Duquesne University spokesperson Gabriel Welsch.

Welsch added that another professor is taking over the course.

Within moments of learning of the incident, School of Education Dean Gretchen Generett sent a letter to the students of the class, and she apologized for the incident and thanked those students who emailed the offending professor directly.

"I want to thank students for using their voices to share the troubling and disturbing language that was used by your professor in class," wrote Generett in her letter.

“To be clear, I believe that there is never a time, pedagogically or otherwise, for a professor to create a hostile learning environment,” she continued. “I know this from my experience as a student, a professor, and now as Interim Dean of the School of Education. Using the ‘N word’ or seemingly encouraging students to use that word is not in keeping with the mission of the University, the School of Education, or the Pennsylvania Department of Education.”

A Duquesne University student who asked to remain anonymous told Pittsburgh City Paper that the professor who said the n-word was Gary Shank of the university’s School of Education.

During the video, Shank is also apparently giving other students permission to use the n-word.

“I'm giving you permission to use the word, OK? Because we're using the word in a pedagogical sense,” said Shank in the video. “What's the one word about race that we're not allowed to use? I'll give you a hint. It starts with ‘N.’ It’s even hard to say, OK. I'll tell you the word. And again, I'm not using it in any way other than to demonstrate a point."

During the session, the student sounds uncomfortable with the entire situation.


Duquesne University's student newspaper The Duquesne Duke obtained an email Shank sent apologizing to students in the Educational Psychology class on Wed., Sept. 9, after students emailed their advisor to complain and at least one student emailed Shank directly.

"As part of my pedagogy this morning I used a term that I now realize was deeply troubling to the class," Shank wrote in the email. "It was not my intent to do so, but I must take responsibility for the impact of my words and teaching. As a consequence, I am offering each and every one of you my most sincere apology and my guarantee that I will never cross this line again in our class. I consider my students to be like part of my faily and so this is doubly troubling to me to have had this impact. If you would like to reach out personally to me, I am here to listen."

The placing of Shank on leave and investigating the use of a racial slur by a professor comes as Duquesne University has been embroiled in controversy surrounding Dannielle Brown’s hunger strike.

Brown has been asking for answers about her son’s death for nearly two months. Her son, Marquis, was a Duquesne University student who died in 2018. Brown came to Pittsburgh this July, saying she didn’t believe the university’s account of Marquis’ death. Since then, she has been on a hunger strike and garnered significant press attention, including some national publications.

Brown has become a growing part of the country’s Black Lives Matter movement. She has been requesting more information from the university and believes that race has played a part in why she hasn’t received the answers she desires. Duquesne University officials say the requests Brown is seeking are available to her, and that she and her counsel just need to arrange a meeting with officials to sign confidentiality agreements to review the Duquesne Public Safety file of her son’s death, which officials say are consistent with federal and state privacy laws. Duquesne University says that since Brown filed a lawsuit against the university, it's why it claims it needs her to go through this formal process in order to see official files.

Brown has disputed the need to sign a non-disclosure agreement and continues to post objections on her social media pages to an agreement the university shared with her previous lawyer that would have had her view documents via Zoom. University officials say that previous lawyer is no longer representing Brown, and they are unsure of who her new and current representation is.This story has been updated on Sun., Sept. 13 with additional information from The Duquesne Duke.