If everyone was as even-handed as Ken Gormley, he'd never have needed to write The Death of American Virtue.

Gormley, a Duquesne University law professor, has compiled what may be the definitive account of the impeachment of President Bill Clinton. He spent nine years interviewing people the rest of us hoped to forget: Linda Tripp, Paula Jones, Monica Lewinsky, Clinton himself and his nemesis, independent counsel Ken Starr.

Reviews have hailed Gormley's balance and dedication. (His father died the day he came to New York to interview Lewinsky: Gormley did the interview anyway.) The book's nearly 800 pages make numerous startling disclosures: that the FBI tried to trick the Secret Service into passing misinformation to Clinton; that prosecutors drafted an indictment of Hillary Clinton before pursuing the Lewinsky scandal instead; and that Susan Weber Wright -- the judge who first tried the Paula Jones case -- considered charging Clinton with criminal contempt for perjury. Had she done so, she might have accomplished what Republicans did not -- ousting Clinton from office.

But perhaps the book's most surprising argument is that in this monstrous farce, there were surprisingly few monsters. 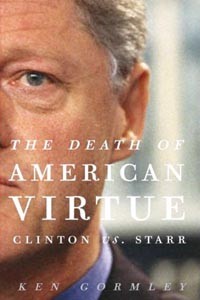 Your first book was about Archibald Cox, the Watergate special prosecutor. In the new book, you say of Cox, "If only America could figure out how to build new models like him." Why can't it?
Cox had this remarkable sense of duty to the institutions of government: Never shout down the other side, always be respectful of all concerned. Somewhere, the country lost its moorings, and got used to this notion that we should fight to the death.

The Clinton/Starr saga is where it reached a crescendo. But there were a lot of things building up to that: the Robert Bork [Supreme Court] hearings, Iran/Contra, Watergate. The culture had changed, so [the impeachment] became a colossal train wreck. People were willing to go for broke without thinking about the consequences for the country.

The title Death of American Virtue is referring to public virtue, and officials understanding that restraint is a big part of their jobs. Just because you can subpoena the mother of Monica Lewinsky, doesn't mean you should. We need leaders who understand that this slash-and-burn approach to government is a dangerous thing.

Given the current political landscape, it's hard to imagine things changing.
I've been surprised, actually -- I've done dozens of radio and TV interviews, and on both quote-unquote "liberal" and "conservative" talk-shows, I'm seeing a growing sentiment that always going for the jugular may not be such a great thing.

What were you most surprised to learn while working on the book?
The discovery of the draft indictment of Hillary Clinton was a heart-stopping moment. No one else had seen that, including the Clintons themselves. And then there was the investigation of Ken Starr's investigation --

-- an investigation whose report is still under seal, to protect the privacy of the people looking into Clinton's personal life. That was a nice little irony.
Yeah, that was a surprise, to say the least. I haven't seen the actual report, but I got the next best thing -- an oral version of it from Jo Ann Harris [who compiled it]. And it did not paint Ken Starr's investigation in a favorable light, especially their handling of Monica Lewinsky.

What part of this story is least understood by the public?
It depends on the predisposition people have going into it. There are people who view Ken Starr as evil incarnate -- a bad person who wanted to bring down President Clinton. And that isn't accurate. He's a first-rate lawyer; he was almost on the Supreme Court.

On the other side, you have a perception that President Clinton would sell his mother into slavery for a vote. That's the furthest thing from the truth. One thing that leaps out at you is the incredible thoughtfulness of this person.

If neither of these guys was so terrible, why did it all turn out so badly?
It wasn't Bill Clinton or Ken Starr as much as the teams that grew up around them. There was so much suspicion and distrust, and people were willing to push further than they ordinarily would. Ken Starr's expansion into the Lewinsky case was the most significant lack of restraint on his side. By that point, his prosecutors had come to so thoroughly distrust Bill and Hillary Clinton that they wanted that case, very badly. That judgment was not a good one for the country.

In reviews of the book, the constant refrain is "Ken Gormley stays above the partisan bickering." But the book barely deals with figures like Matt Drudge and Ann Coulter -- who helped make this a partisan circus. Do you worry that you might have missed the "vast right-wing conspiracy"?
I tried to talk to Matt Drudge: He was one of the few people who wouldn't talk to me. But I did interview Richard Mellon Scaife, who was very clear that he had no association with Ken Starr, and frankly thought he didn't do that great a job, because he didn't nail Clinton down.

And if you take an honest look in the mirror, you have to say that both sides share responsibility. As one of my Republican friends said, "We brought the elephant gun, but Bill Clinton supplied the bullets."