Duolingo founder, a Pittsburgher and immigrant, works with White House to fight illiteracy in Central America 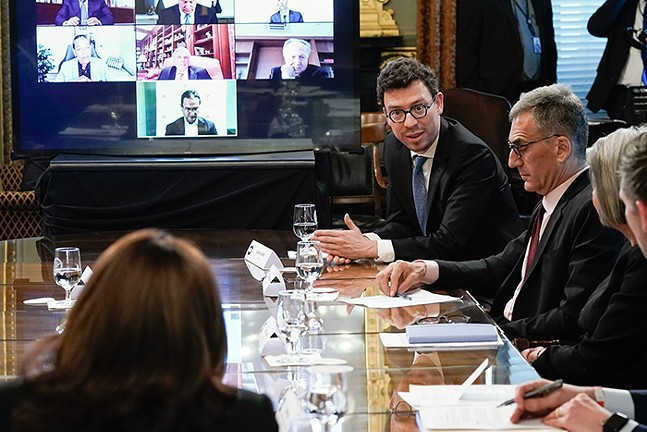 He emigrated to the U.S. in 2000 to attend college, and later graduate school at Carnegie Mellon University.

“My mother spent everything she had on my education, which undoubtedly changed my life,” von Ahn said Thursday. “But I am acutely aware that my outcome is extremely unusual for most people from Guatemala and our neighbors in the Northern Triangle, Honduras and El Salvador.”

On Thursday, he and representatives from other companies including Microsoft, Chobani, the World Economic Forum, Accion, Nespresso and Mastercard joined Vice President Kamala Harris at the White House as part of a “call to action” for the private sector to invest more deeply in the Northern Triangle countries of Guatemala, Honduras and El Salvador.

The goal is to address the root causes of migration from these countries.

Microsoft reportedly plans to expand internet access in the region to as many as 3 million people by 2022, and Mastercard will help expand access to banking services. Nespresso will begin purchasing some of its coffee from El Salvador and Honduras, investing some $150 million by 2025.

The vice president is scheduled to travel to the area next month, amid a surge in immigrants from Central America to the U.S.

“I believe that the businesses — in particular, our private business sector — have a very significant role to play, as we all know, in creating jobs, in promoting economic opportunity, and in long-term development,” Harris said ahead of a roundtable meeting with the group.

As part of the initiative, Duolingo, whose app is used by more than 500,000 people in the Northern Triangle to learn English, says it will keep its content free and accessible, and will make Spanish the next language in its Duolingo ABC app, designed for children ages 3 to 7.

The company says the goal is to tackle global illiteracy problems before they begin.

It will also expand its Duolingo English Test fee waiver program in the Northern Triangle area, so that high-achieving, low-income students in the region have access to educational opportunities.

“Throughout my life I’ve worked to find ways to use technology to solve problems for people,” von Ahn said. “By making education free and accessible to more people through smartphones, I believe we can reduce income inequality over time.”
Kim Lyons is a correspondent for the Pennsylvania Capital-Star, where this story first appeared.