It’s diverting, with plenty of the legendary Kaufman humor. 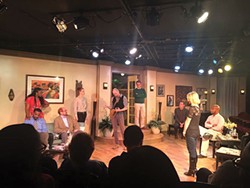 and one purpose — to make you laugh. Pittsburgh Playwrights Theater Co. gives the show an airing, surely its first locally in at least 50 years.

Dulcy is what used to be called a flibbertigibbet; a chatty, slightly silly young woman easily ruled by whim. She hosts a weekend party for her husband’s business associate, but her tone-deaf social skills lead to her invite rival suitors of the same woman, strangers with secrets, and lots more. Dulcy’s got a big heart, but her belief that everything works out brings disaster.

In 2005, Playwrights presented another forgotten Kaufman play, The Butter and Egg Man, which I enjoyed tremendously. Dulcy isn’t quite up to that level of rollicking fun. It’s diverting, with plenty of the legendary Kaufman humor, but its three acts give us too much time to notice the dated quality of both the characters and dialogue.

I’m intrigued by director Corey Rieger’s attempts to mitigate that. He’s reset the play in 2015, but without updating the lines or characters … so you’ll have people with smartphones saying things like “I mayn’t, sir.” I admit I had some trouble with that dissonance. The role of Dulcy — in an excellent performance by Melessie Clark — hasn’t aged well over the past century. In 1922, her scatterbrained whimsy is adorable; in 2015, she seems to need medication.

Rieger does a great job keeping this large cast on task and up to speed. It’s a talky play, and he makes sure the pace doesn’t flag. In addition to Clark’s performance, I enjoyed Wali Jamal’s scene-stealing turn as a put-upon butler, and Gayle Pazerski and Sara Fisher as mother and stepdaughter, both of whom get sidetracked by romance. Luke Chamberlain makes a lot of his nerdy accountant, and Rieger himself is big fun, playing a pompous screenwriter outlining his latest (and most ridiculous) screenplay.

As a Kaufman fan, I’m happy to see even his obscure works, and I salute Pittsburgh Playwrights for providing the opportunity.