The roof of the building across the street from where I'm typing this features the following display: a large tube of plastic sheeting painted to look like the torso and head of jolly old Saint Nick, with two smaller tubes sticking out as arms. An internal fan blows air through all that plastic, forcing it to stand up (well, bend up and down, actually) while the arms flail and undulate according to the air pressure. I guess it's supposed to be Father Christmas coming down the chimney, but unfortunately it looks like Santa being simultaneously sodomized and held up at gun-point.

This time of year always puts me in a reflective frame of mind. When I was a kid I hated Christmas, but I find that as I've gotten older, I hardly even notice it. Since I never watch television or listen to the radio, there's only that little bit of holiday music playing in restaurants to remind me.

So you'd think I'd be the perfect audience for Pittsburgh Irish & Classical Theatre's production of Conor McPherson's Dublin Carol. Usually the holiday brings forth from local theaters some of the sweetest, corniest, sugar-plum-fairy-est shows imaginable, so I should naturally gravitate toward this 90-minute one-act about an alcoholic undertaker in Dublin making it through Christmas Eve.

Perhaps McPherson wanted to offer us jaded theater-goers a Christmas antidote. But if that's the case, I can only say that, like the designer of that obscene Santa flapping in the breeze, something has gone awry.

I never thought I'd live to say this, but it is actually possible for a play to be too depressing. The amount of self-loathing and regret in which McPherson's undertaker, John Plunkett, swims is equaled only by the amount of booze he guzzles. There's not a single moment of his past or present he can look at without being mortified by misery.

In a different sort of play this could, actually, work dramaturgically. But McPherson didn't write that sort of play; he didn't, in fact, write any sort of play. Dublin Carol is just a long monologue of pain with no present action on stage, and only occasionally relieved by two other characters who -- joke's on us! -- are as miserable as Plunkett.

McPherson wrote the 1998 Broadway hit The Weir, and there's no question that he's capable of turning an expressive phrase every couple of pages ... but a play absolutely needs to be more than just someone standing there reliving his past. And when the past in question is as hideously bleak as Plunkett's, that's doubly true.

One reason to stage the show might have been finding a property for the top-notch director and cast. Jackie Maxwell's direction is a wonderfully intelligent example of what underplaying and directorial restraint looks like, relentlessly avoiding splashy theatrical flourishes. She's got Jason Planitzer and Colleen Madden, the two supporting players in this Forlorn Follies, to bring some touches of grace to the production, and Larry John Meyers in a strong, moving performance as Plunkett. It's thanks to Meyers that the evening ends up having as much humanity as it does, maybe even more than McPherson has originally provided.

I wonder what it would take to get rid of that Santa. If only I had a Red Ryder BB gun ... 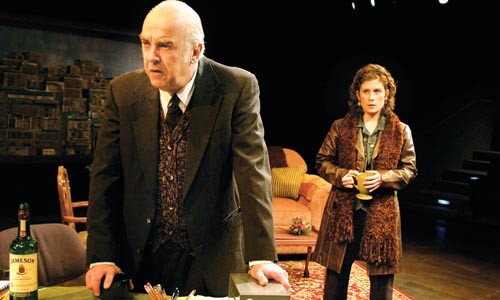