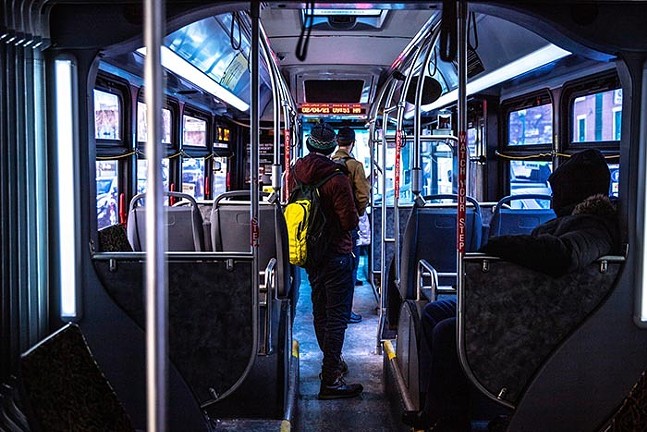 CP Photo: Kaycee Orwig
Riders standing on a Port Authority bus
In July, the Port Authority of Allegheny County announced that, like many industries across Pittsburgh, it was struggling to hire enough workers to fill all positions, especially bus drivers and maintenance employees.

Unfortunately, those problems have persisted, and the authority announced on Mon., Aug. 30 that it is still about 100 drivers and 60 maintenance employees short, according to a Port Authority tweet. The authority acknowledged that the shortage is leading to some missed trips for Pittsburgh-area transit riders, calling them an “unfortunate reality.”


We are currently short about 100 drivers and 60 maintenance employees, and missed trips have become an unfortunate reality. Remember to check with @PghTransitAlert before you depart to see if your trip has been pulled from service.

Port Authority reminded riders to check with its Transit Alert Twitter account (@PghTransitAlert) for ongoing updates and to see if any routes or trips have been pulled from service. Some people on social media have recently complained of missed connections.

Port Authority spokesperson Adam Brandolph told the Pittsburgh Post-Gazette in July that bus drivers take a 10-week course before qualifying to become a driver, and the course pays $15 an hour. If drivers pass the course, they start at Port Authority with a wage of $22 an hour. Brandolph said there were minimal requirements to become drivers.

After five years at Port Authority, drivers reach a top pay scale of $66,000 a year. Drivers can also make more by working voluntary overtime shifts that can be up to time and half. Brandolph said maintenance workers make between $19-20 an hour, and have different qualifications than drivers. Port Authority will train maintenance employees.

Public transit buses aren’t the only modes of transit seeing driver shortages in Pittsburgh. The Pittsburgh Public School district is also seeing a shortage of school bus drivers, which was part of the reason the start of the district’s school year was pushed back. Many other public school districts throughout Pennsylvania are also seeing school bus driver shortages.


To deal with the driver shortage, PPS is encouraging parents to release their school bus seat. On Aug. 26, PPS posted on Facebook that “eligible families will receive communications if the district cannot provide transportation asking them to release their seats. An eligible student is a student that normally would receive yellow bus services and that, as of now, the district is unable to provide the service at this time.”