CP photo: Jared Wickerham
A car-only rally drives past the Allegheny County Jail in Downtown Pittsburgh.
Today, more than 20 people in cars held a drive-by protest in Downtown Pittsburgh calling for more inmates and prisoners across the state to be released given the coronavirus pandemic.

Protesters remained in their cars for the 30-minute duration, but flashed signs in car windows and honked consistently on their route that drove past the Allegheny County Jail and the Allegheny County Courthouse. Signs read, “Save Lives, Stop COVID-19, Release Them Now." More than 15 cars participated in the protest. Police officers were present on parts of the route.

According to the event page for the protest on Facebook, the protesters were calling on Gov. Tom Wolf to use emergency powers to release inmates and prisoners at a faster rate than currently is happening. Advocates are concerned that jails and prisons do not provide enough space for inmates and prisoners to practice proper social distancing, and are susceptible to spreading coronavirus. They are calling for the release of people charged with non-violent offenses, those detained on parole violations, and/or those in jail because they cannot afford their cash bail. The protest is called #ReleaseThemNow.


BREAKING: More than a dozen in cars holding a drive-by protest, honking horns and calling for Allegheny County Jail to release more inmates during the COVID-19 pandemic. pic.twitter.com/9cK69OknGy

Jails in Philadelphia have seen dozens of coronavirus cases among inmates. Today, it was confirmed that a fourth inmate in the Allegheny County Jail tested positive for coronavirus.

Allegheny County Jail recently released hundreds of inmates as part of a collaborative effort between Allegheny County judges, the Public Defender’s office, and the Allegheny County District Attorney’s office. The effort is meant to release inmates with non-violent charges and those who are vulnerable to COVID-19 as a way to stem the spread of coronavirus.

Today’s population in the Allegheny County Jail is down to 1,666 inmates, which is a decrease of more than 500 from a month ago. However, some advocates and elected officials believe the jail must release inmates faster and in larger volumes to better stop the spread of COVID-19. 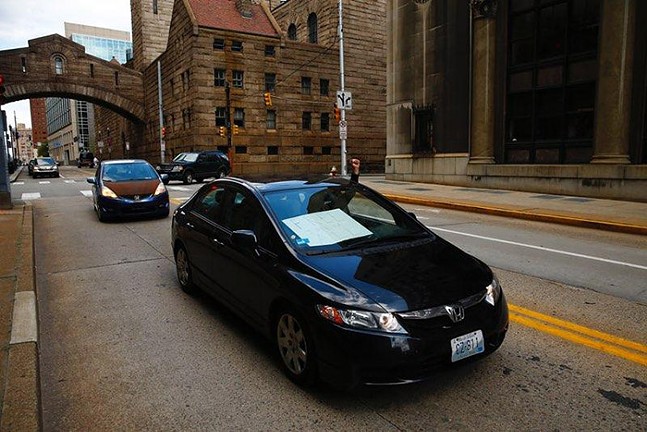 CP photo: Jared Wickerham
A car-only rally drives past the Allegheny County Jail in Downtown Pittsburgh.
Allegheny County Councilors Liv Bennett (D-North Side) and Bethany Hallam (D-Ross) introduced an emergency bill three weeks ago calling for large-scale release of inmates charged with non-violent offenses and those detained on technical parole violations, but it was rejected by Allegheny County Council.

Last week, Gov. Wolf announced temporary reprieves to non-violent state inmates due to the COVID-19 outbreak. That decision could affect about 1,800 inmates currently incarcerated in state prisons, and it was praised by advocates, but many were still calling for additional measures to lower the inmate population statewide.

“This is an excellent first step by Gov. Wolf," said ACLU of Pennsylvania director Reggie Shuford in a statement. "It must not be the last step.” 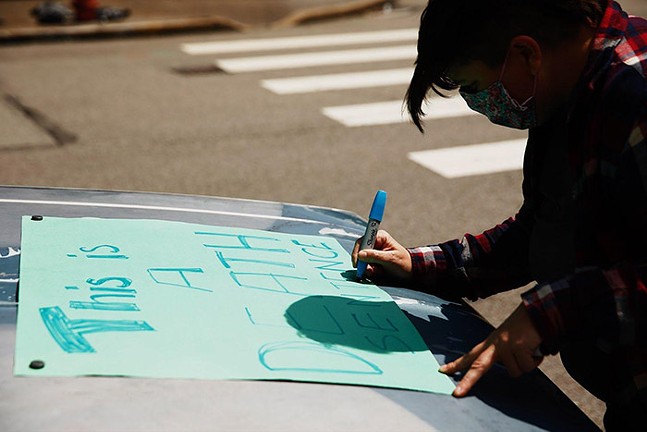 CP photo: Jared Wickerham
A protester pens a sign to hold during a car-only rally past the Allegheny County Jail in Downtown Pittsburgh.
While state and county officials have acted to release inmates, even if not at the pace desired by advocates, it appears the federal government is doing little to lower the inmate population, particularly at the Allegheny County Jail. There are about 250 inmates in the Allegheny County Jail held on federal detainers. According to WESA, Western Pennsylvania court-appointed defense attorneys have requested more than 40 federal inmates be released early, but Trump-appointed prosecutors have opposed all but one. Additionally, federal judges have denied 24 requests and have granted no releases as of April 13.

One of the protesters during the drive-by protest held cardboard that read “Prison shouldn’t be a death sentence.”

Yesterday, an inmate in a state prison in Montgomery County was the first inmate to die of coronavirus in Pennsylvania. Shortly after that announcement, an inmate in Philadelphia died of COVID-19 while held at Riverside Correctional Facility on State Road jail.