CP sampled the spirits, parsed the cocktail puns, and saw how these seasonal haunts measure up this year. 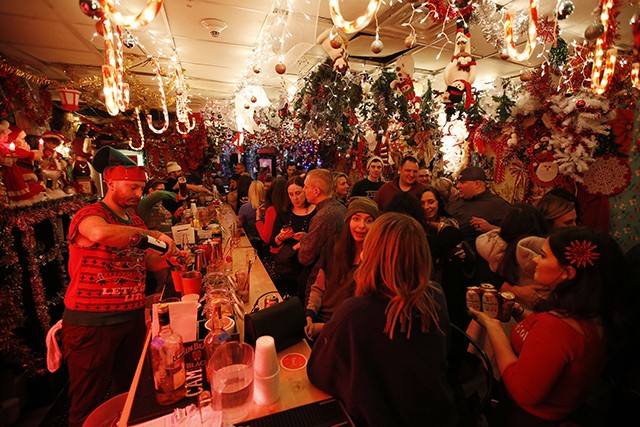 The team behind the Halloween pop-up Zombie Den has now transformed The Original Oyster House in Market Square into a holiday wonderland. We arrived before the happy-hour crowd, early enough to snag a table. A footie pajama-clad bartender brought us our drink choices: Old Laing Sighs, a wintery play on a whiskey smash made with rosemary, pine, and juniper, and Noche De Navidad, a hot chocolate with mango-habanero whiskey and tequila.

Old Laing Sighs was refreshing, the citrus mellowing out the bourbon. I was worried about the pine channeling flashbacks to bad air fresheners, but it balanced with the rosemary and juniper. On the other hand, the Noche de Navidad was cloying, the mango and chocolate combo reminiscent of the foil-covered, chocolate oranges stuffed in my childhood stockings. There was a subtle burn at the end, but not enough to mask the saturated hot chocolate.

Out of all the stops on our crawl, Jingle Bar was the most modern. It was lit with blacklights, producing a charming neon purple hue. Stock holiday footage from Hulu was playing on a TV, a fascinating rotation between reindeer balloon animals and fireworks. A huge bonus: Jingle Bar is quite large. We weren’t shoved into a corner or standing in a mosh-pit of strangers.

A big “Sponsored by Smirnoff” sign should have been hanging from the ceiling, since almost every cocktail was branded by the vodka. We opted to go a different direction and chose one of the only non-vodka cocktails, the Silent Night (Tanqueray, honey grappa, lemon, and violette liqueur). The drink was clearly pre-mixed and left us a little confused. It was a competition between too many flavors, resulting in an unappetizing cough-syrup taste.

Harris Grill turned its Downtown location into Tinsel Town, aptly named for the tinsel shimmer radiating from glitter-covered walls. Snoopy lights and more tinsel hung from the ceiling, next to drinking elves and a three-person Capitan Morgan sweater (free to try on). The bar was tiny, fitted with a few tables for food service and little standing room. Similarly, the menu was small, offering four cold cocktails and two hot. We went with two from the cold menu: Ho Ho Rita and Boulevardi-sleigh.

The Ho Ho Rita was, as you might expect, a Christmas-themed margarita. Decked out with a sprig of rosemary and three cranberries, it was mostly tequila balanced by sugary mixers. The Boulevardi-sleigh — Maker’s Mark, Campari, and sweet vermouth — was tasty and standard. Do take note: Harris Grill doesn’t joke around with their alcohol. These pack a spirited punch, and just like the carol says, “You better watch out!”

Our last stop was the Miracle pop-up, known nationwide with more than 80 locations. If Christmas threw up, this bar would be the aftermath. It was covered wall-to-wall in decorations. Animatronic Santas moved creepily above the bartenders’ heads. It was packed and we squished next to a row of holiday card-decorated refrigerators.

Since 2016, Miracle has been a part of Pittsburgh’s holiday celebrations and each year the drinks get better. The impressive cocktail program features interesting ingredients, like sweet potato and pumpkin pie. We ordered the Christmapolitan and Yippie Ki Yay Mother F****r! The Christmapolitan was incredible, spiced cranberry adding a cold-weather feel to an otherwise summery drink. Yippie Ki Yay Mother F****r! surprised us, especially with the addition of sweet potato syrup, but drinking it was a challenge. It required full-face immersion into the mug, but it was worth every last drop.

Miracle was by far the most festive of the holiday bars. We drank from fa-la-la barrels, Santa’s face, and Santa’s bottom half. By the end, we were drunk on holiday spirit.