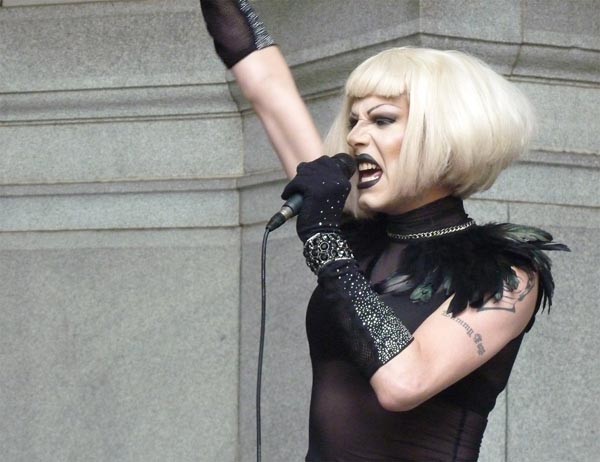 And it's still not clear who the real Sharon Needles is.

Wearing a bleached blonde wig, jet-black lipstick and a flowing black gown with feathers around her shoulders, Needles arrived just as Council President Darlene Harris was discussing Flag Day. "If there's anyone on time, it's not a drag queen," Needles proclaimed. Later, Councilor Patrick Dowd presented a proclamation declaring June 12 "Sharon Needles Day"; when Dowd referred to her hometown in Iowa as flat, she caressed her breasts.

Dowd's proclamation praised Needles, whose legal name is Aaron Coady, for "intending to spark discussion that breaks down barriers created by discrimination, as well as stereotypical portrayals of members of the drag community." It lauded her as "a fearless but humble artist, sharp-witted social critic, and just one example of the diverse range of citizens that Pittsburgh is proud to call its own."

Some aren't so sure. Needles' rise to fame has also brought criticism, including charges that her own work traffics in bigotry and stereotypes. Eli Kuti, a bartender at Lawrenceville's Blue Moon, where Needles often performs, recalls one performance in which Needles and another drag queen donned one-piece bathing suits emblazoned with swastikas. The two "were hailing Hitler" and calling crowd members racial epithets, Kuti says.

"I was in complete shock. Some people left," he adds. "It's been done before, it's stupid and we don't want that shit in Pittsburgh."

In May, the online publication Huffington Post posted a video in which Needles appeared, out of costume, speaking after an episode of Drag Race. In that video, Needles acknowledged that she didn't "know how to tip-toe around gender rules or queer politics," and mocked a critic who faulted her for "paint[ing] myself brown" — presenting herself as black — and "us[ing] language that she found offensive."

HuffPo writer Brandon Thomas called her out, writing "What you did is known as ‘blackface,' which has its roots in white supremacy."

The blog "Queering the Game of Life" (queerandpresentdanger.tumblr.com) thundered, "[N]ot only is Sharon Needles now being unapologetically racist, she's ... denouncing ‘queer on queer violence' without recognizing EVERYTHING SHE IS DOING IS VIOLENT. Does she not know her racism is harming Black queers? Or does she not give a fuck?"

"They have all this angst and all this energy and we're living in Southwestern Pennsylvania where there is some real hate, some real fucked-up shit going on," she says. "And they are focusing on a social-commentary midnight clown" whose drag performances they are free to ignore.

Supporters, meanwhile, say the things that make drag shocking are the same things that make it effective as social commentary ... and that Needles is one of the few drag queens whose performances make a political statement.

"Ninety percent of drag queens are only female impersonators," says Eric Shiner, director of The Andy Warhol Museum and a friend of Needles. "Very few take it to the extreme, take it to be a political voice or a social critique." 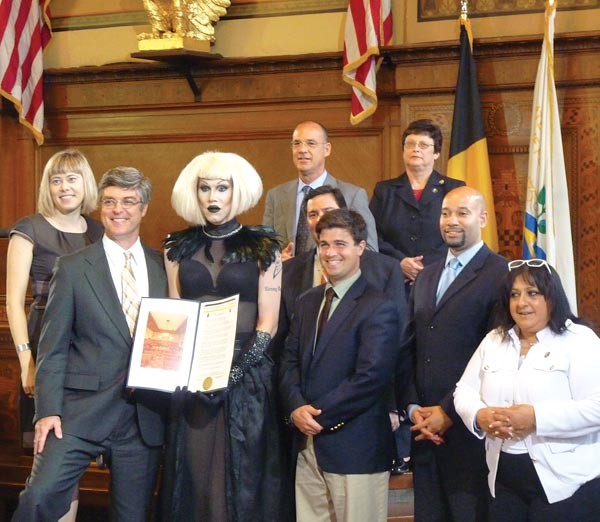 "I didn't grow up listening to the Spice Girls," Needles told City Paper in a brief interview following the June 12 council event. (Needles, who faults CP and other local media for not paying attention to her until the RuPaul show, declined to discuss in detail the accusations and criticisms.) "I grew up listening to Marilyn Manson and the Sex Pistols and G.G. Allin, who were really pushing barriers and doing things that made you give a double-take. The reason I prefer transgressional art is because it's the kind of art I like to watch."

Similarly, she says, "When I first started doing drag, I saw the most powerful drag queens as this aggressive, kind of angry, thing." So her own onstage persona was modeled after "borderline misogynistic '80s bimbos" like Elvira and Peg Bundy, the razor-tongued wife in on TV's Married With Children.

There's little question that Needles takes pleasure in tromping on social norms. In a music video for a song she titled "412/724 Whore," Needles takes the role of a prostitute, walking the streets of Pittsburgh while singing a song in which she regales the viewer with tales of giving blow jobs to various local celebrities, and having sex at landmarks including Frick Park and the Warhol. There are also references to various enclaves in Squirrel Hill and Uptown, where "their horse dicks make me gag."

Needles has been performing drag in Pittsburgh for the past eight years, often at the Blue Moon bar, as part of the drag troupe Haus of Haunt. Her on-stage persona is "a mixture of current social anxieties and a nitwit." It's all about taking "really dark issues and forcing them into the spotlight so we can all think about it, create dialogue and laugh at ourselves."

Not everyone is laughing.

Kuti says he stopped working at the Blue Moon on the nights of the drag shows because the shows were offensive and intimidating. It'd be one thing, he says, if Needles were explaining the message behind the symbols she uses on stage. But "they're trying to do some kind of shock thing," Kuti says. "You're not proving any kind of point if the only dialogue is, ‘You're so wild and crazy, you do whatever you want.' There's no dialogue on racism at these things."

And Kuti says the discussion has led to fierce divisions within the city's queer community. He's lost friends who are angry for his vocal criticism of the drag queen; he, in turn, has turned away from friends who continue to attend the shows.

Meanwhile, complaints about Needles using racial epithets both on- and off-stage have been circulating online, along with a photograph in which she appears to be wearing a T-shirt emblazoned with a swastika.

Locally, public criticism has been muted. Dowd confirms that when he issued his proclamation, he did receive "some calls of criticism [telling] me how wrong I was," and City Paper too has spoken to locals who were upset. But few wanted to speak on the record, in part because of fears that doing so would play into the hands of anti-gay bigots, or lead to harassment from Needles' fans.

"Most people I've seen critique this have done so quasi-privately," says one local critic, a black man who has tussled online with Needles' supporters — and who didn't want his own name to be used. Part of the reason, he says, is concern that criticizing Needles would "play off homophobic feelings. We don't want to use society's homophobia as a tool against things we find problematic for other reasons." If Needles "were a straight person" engaging in this behavior, he adds, "people would feel more comfortable" criticizing it.

It is difficult to verify some of the behavior attributed to Needles. Much of online commentary has since been deleted. Some of it — including a pair of alleged Facebook posts that touched off some early criticism of Needles — may have been faked, or intended as satire. Needles has said the Facebook pages are forgeries, according to LGBT blog Queerty. But while she doesn't deny having worn swastika-bedecked apparel, for example, she largely turns aside criticism.

"I can't give [critics] press," she says. "I've tried to create a humane dialogue with them before and it never works."

Dowd says he learned of Needles through colleagues and his own children. He says doesn't watch television and acknowledges that he hasn't seen Needles perform, and that he isn't "standing here to defend everything she does." He was, he says, unaware of the complaints about Needles until the day the proclamation was issued. Still, he says, even in light of the controversy, he'd award Needles a proclamation again.

"What we do with proclamations is honor the good work people do," he says. "It doesn't mean we believe everything Sharon Needles says, or that we support everything Sharon Needles does. But we respect that she puts herself out there and that she won Drag Race." What's more, "She carries a message about bullying and channeling into a positive direction something that was negative. ... There are people who do things to provoke a response ... and the reason is for more people to ask questions, to think, to re-evaluate and reposition themselves. That helps bring change."

"I'm so proud of [Sharon]," says Marsha Monster Mellow, a stalwart of the local drag scene who encouraged Needles to relocate to Pittsburgh from Iowa eight years ago. "Drag is a hard lifestyle. People don't realize the battles we have to fight."

Needles is "not a racist, she's an opportunist," stresses Mellow, who is white. After all, she says, if Needles were truly a racist, she wouldn't have done a show hosted by a black drag performer.

"Drag is all about pushing buttons," Mellow says. "Being gay is about living life and pushing buttons and a lot of people are still afraid. ... If you don't understand something, ask questions. Don't point fingers."

When Needles has come out in black make-up, "it was as a character," Mellow says. And in creating such a persona, Mellow adds, makeup is as carefully considered — and at times as outlandish — as any other aspect of the performance. It is "not slapping black shoe polish on," says Mellow. "It's all about how much effort you put into a look."

In any case, Needles isn't alone in provoking these questions.

As Zach Stafford, of Huffington Post, wrote about the Drag Race champion, "There seems to be a constant tension between drag and racism." As an example, he cites Shirley Q. Liquor, a drag persona created by Charles Knipp, a white male from New Orleans who plays at being a sexually promiscuous black welfare recipient. Asked Stafford, "Why is drag sometimes racist, and why do drag performers occasionally do arguably racist things?"

Shiner, of the Warhol, says the reason is "to deconstruct those stereotypes. Pushing buttons to draw attention to social ills is a good thing."

But Needles herself seems a bit more ambivalent. On the one hand, speaking before council on June 12, she said she was proud to be a "voice of positivity for gay people," and trumpeted her Drag Race victory as "a win for every single kid in this city who's still being bullied, who's still being judged for who they are." Instead of talking about her critics, she says, she'd rather focus on the hundreds of letters she receives from kids who saying she's been an inspiration.

On the other hand, when asked afterward if she were trying to use her performances to discuss specific issues, she said flatly, "No. That's not my problem. I'm an artist and I don't fucking have to answer for my work."