Dragged Down?: Promoter wants to bring drag shows to a wider audience, but many worry whether he's the guy to do it. | News | Pittsburgh | Pittsburgh City Paper

Dragged Down?: Promoter wants to bring drag shows to a wider audience, but many worry whether he's the guy to do it.

"Even when he tries to do something right, it cancels everything out." 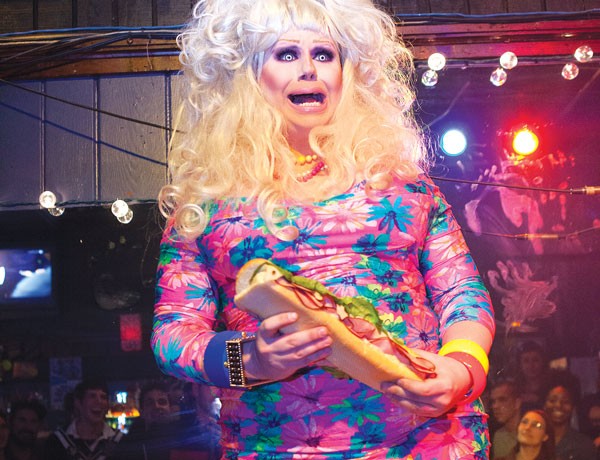 Pittsburgh's drag scene has come a long way. On most nights of the week, enthusiasts don't have to go far to catch a local performance. Bars like the Blue Moon, Cattivo, Brillobox and There Ultra Lounge all feature drag shows, many on a regular basis. In recent years, that scene has been sustained by performers like Marsha Monster Mellow and institutions like OUTrageous Bingo — and it's been popularized nationally by local performers like Sharon Needles and Alaska Thunderfuck, who broke into the mainstream thanks to RuPaul's Drag Race. Needles' winning performance on the reality-TV show last year earned her a city-council proclamation.

Yet a Johnstown-based promoter/activist, John DeBartola, is raising concerns that he might damage the scene's hard-won credibility — even as he pledges to elevate it even further.

DeBartola is President of the Keystone Alliance/Gaylife Newsletter, which annually produces a drag pageant. This September, he's serving as executive producer for the "Miss Pittsburgh Public Access TV Pageant." Along with fellow event-promoter and owner Brian Tee, DeBartola will hold the pageant itself this spring: The city's public-access television station, Pittsburgh Community Television, will offer viewers a chance to catch the drama from home in a broadcast this fall.

DeBartola says he intends not just to promote local drag performers, but to raise the standards of local drag — in part by requiring contestants to disclose any criminal records on their applications.

"We always require that our contestants be of high moral standing," DeBartola explains. "You're representing the GLBT community and our organization. It doesn't mean we'll disclose the information. But we don't want it to fall back on us."

But some veteran performers on the local drag scene say that if anything threatens the community's reputation, it's DeBartola himself. While some credit him as a beacon in Pennsylvania's less gay-friendly areas, others note a string of disputes surrounding his shows.

"He puts out so much negative energy that even when he tries to do something right, it cancels everything out," says Mellow. It's "fine and dandy if you want to represent the community and educate about drag," she adds, "but you have to be respectable."

Pittsburgh doesn't lack for pageants: Promoter and drag king J.J. Cox notes that there are plenty of titleholders locally for regional and national drag pageants, including himself.

Pageants — which consist of multiple categories ranging from evening wear to talent and, usually, question-and-answer sessions — allow a performer to build a reputation while honing performance skills. "It's a vehicle," says Cox. "It's something you can use to elevate yourself."

But Keystone organizers say they try to make their pageants accessible to beginners as well as to veteran performers.

"When you're first starting out, you're not always the best," says Christian Diane, a drag queen from Cumberland, Md., who's currently the newsletter queen and co-host of this year's pageant. "You need practice to get better. We have helped people along."

Even some of DeBartola's critics acknowledge the role he plays in areas outside of Pittsburgh.

"In that area, for a very long time, [DeBartola] was the go-to person for drag," says Kitty Klottsalot, an Altoona-based queen who performs at the Blue Moon in Lawrenceville. "You have to give credit where credit is due. John DeBartola did give me my first shot at doing drag. Granted, it was for free."

Klottsalot participated in the Miss Keystone Alliance pageant and won the title for 2011-12. But her relationship with DeBartola has since soured. As a winner, she agreed to do a free benefit and march in the Pittsburgh Pride parade. But when she got a paid gig, she backed out of marching. Klottsalot says such occurrences are "standard" in the business, as long as ample notice is provided. But DeBartola says Klottsalot reneged on her contractual obligations as a title-holder or work with other performers, and stripped her of her crown.

DeBartola has clashed with other queens as well. "It's been nothing but drama," says South Side drag queen Akasha LeStat, who was also stripped of her title. LeStat says the organization tried to stipulate how much she could get paid to perform at other venues.

DeBartola took another former title-holder, South Hills-based Jezelle Van Cartier, to court in a dispute over money, a case that he says led to the background-check requirements. Van Cartier has a criminal background and is on probation, something that concerned DeBartola when it came to collecting fundraising money.

Their argument played out on television courtroom show Judge Mathis. Keystone did not receive the money it requested but Van Cartier was ordered to return her crown.

"I would say John DeBartola gives drag an incredibly bad name," says Klottsalot. "The Pittsburgh [drag] community is very well united that John DeBartola needs to be stayed away from."

City Paper spoke to other observers who were wary of going on the record. But while DeBartola has been outspoken on LGBT issues — he called on Somerset County to offer same-sex benefits to county employees, for example — critics note that his advocacy has sometimes taken troubling turns. In 2010, for example, DeBartola's group gave a "Spirit Award" to state Sen. John H. Eichelberger Jr., a Blair County Republican who has backed a constitutional amendment banning gay marriage. DeBartola says Eichelberger tried to help resolve a long-running dispute with Parents, Families, and Friends of Lesbians and Gays (PFLAG), a nationally known gay-rights advocacy group.

And some veteran queens say they won't perform in part because DeBartola's shows often get mired in drama and threats of dethroning.

"It's an embarrassment to the community," says Mellow. "It's he-said, she-said bullshit."

DeBartola and other pageant organizers say such complaints are misdirected. They ask a lot of their contestants, he says, because they are representing a community through speaking engagements, news interviews and benefit shows.

His isn't the only pageant that requires a background check. At Miss Gay Pennsylvania America — a regional competition for the national Miss Gay America — contestants are required to reveal their criminal histories. Promoter Jeff Weary says their participation is based on a case-by-case basis.

"They can be prohibited [from competing] depending on what it is, how long ago it was and under what circumstances," says Weary, who's been running the pageant for 23 years. Histories of theft, for example, are usually prohibited. "Drag is very expensive and if you're in dressing rooms and there's jewelry — that [charge] could hinder" participation.

Being stripped of one's crown, he says, is "rare" in the Gay America series, Weary says. The major requirement for participants, he adds, is "Don't cause us any problems."

Miss Gay America has a better reputation as a pageant, many performers note. For one thing, a title comes with the promise of paid bookings.

But DeBartola and his backers make no apologies for having high expectations.

"Every time you have a chance to present a positive image of yourself and the organization," says Diane, "it helps people understand the GLBT community."

Editor's note: An earlier version of this story misstated John DeBartola’s role in the Miss Pittsburgh Public Access TV Pageant. DeBartola is the show’s executive producer, not its executive director. The story also misattributed a quote. It was DeBartola, not director/producer Brian Tee, who said that previous Keystone Alliance/Gaylife Newsletter pageants had attracted “hundreds” of applicants.