Drag queens get all the attention, but there’s more to the drag community than what’s on TV | News | Pittsburgh | Pittsburgh City Paper

Drag queens get all the attention, but there’s more to the drag community than what’s on TV

“There needs to be more representation of kings, so people can get to know us.” 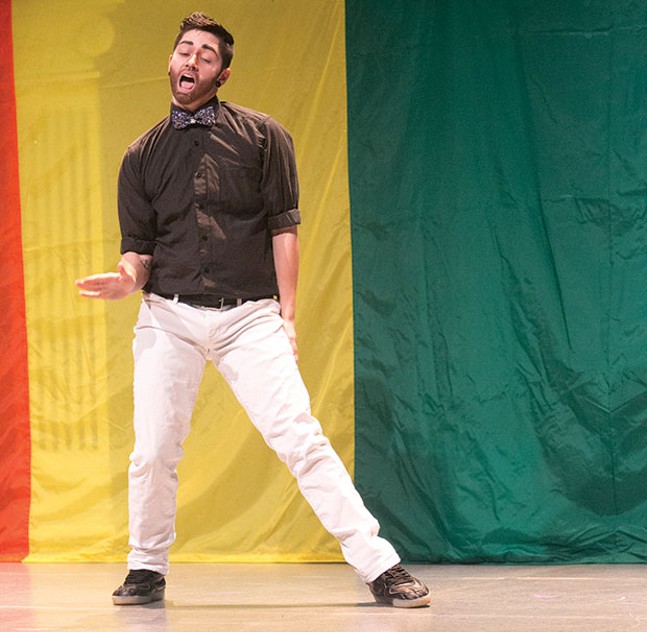 Next year will mark the 10th season of RuPaul’s Drag Race, a reality competition television show hosted by the world’s most well-known drag queen, RuPaul.

In the time that it’s been on the air, the show has done much to thrust drag into the mainstream. And after airing on LGBTQ cable network Logo for the first eight seasons, this year RuPaul’s Drag Race made the jump to the more widely available VH1 channel.

Drag Race has been nominated for and won several Primetime Emmy Awards. The lip-syncing performances and voguing that form much of the show have greatly influenced popular culture; catch phrases from the show have been added to our collective lexicon.

But there’s still a lot about drag culture that many Americans don’t know. Although they receive less attention, there are large drag-king communities in cities like Pittsburgh. And there are also numerous performers that don’t identify as either kings or queens. They’re part of a growing group of performers who identify as queer kings or trans kings.

“Drag queens are very much renowned, both because of RuPaul’s Drag Race and the amount of attention drag queens get in general” says Jay Mockery, a local drag performer. “There needs to be more representation of kings, so people can get to know us. I feel like there are some misconceptions about what we do.”

I like to blur the lines,” Mockery says. “While I do masculine stuff, sometimes I like to do more feminine things.”

Mockery was first introduced to drag by another drag king shortly after they began dating. The king asked Mockery to check out one of his performances, the first Mockery had seen.

Mockery also draws a lot of confidence and strength from dressing up and performing in drag.

“I’m not the most confident person,” Mockery says. “My profession requires me to have some kind of confidence, but every time I get into drag, I just have this burst of crazy amounts of confidence, where I feel like I can take on any issue.”

In the year or so that Mockery has been involved in the drag community, they say they’ve noticed some misconceptions around drag kings. Mockery says some believe drag kings don’t put as much effort into their costumes and — gasp — that they don’t memorize the lyrics for their lip-sync routines.

“Drag kings put in the same amount of effort as drag queens,” says Mockery. “Drag kings are known as people who don’t know their lyrics, and knowing your lyrics is Drag 101. Just like drag queens, drag kings put a lot of emotion into their performances.”

“I identify as a trans king,” Encounters says. “Being a drag king is a female dressing up as a man and acting. But me, being transgender, I’m dressing up as myself and being myself.”

Encounters was first exposed to drag this year and has been performing for four months. So far, his favorite performance was when he dressed up as professional wrestler John Cena, and he already has other costumes in the works for future appearances.

“I like being on stage. I like being the center of attention. I feel more free and more masculine doing drag,” Encounters says. “And the drag community has been super open-minded and super kind to me.”