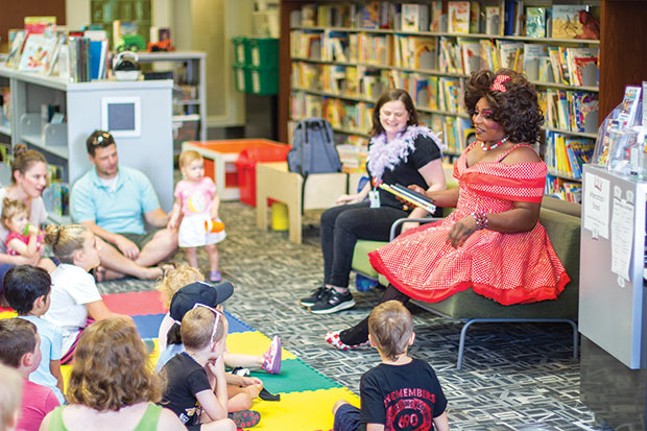 This program, which pairs a drag queen and a librarian for readings and performances for kids, seeks to expand understanding of gender, encourage self-expression, and tell a good story. But Van-Cartier (whose name is Michael King) wasn't sure how kids would react.

"I wasn't sure if they'd be scared of me at first or if they'd just accept me," says King.

It was the latter.

"[The kids] come around to realize, ‘Oh she's just an adult who plays dress up and Halloween more than once a year,’” King says.

This month, the Carnegie Library of Pittsburgh (CLP) will host five installments of Drag Queen Story Hour at the Squirrel Hill, South Side, Main, Woods Run and Knoxville branches. The story hour is aimed at children up to fifth grade.

Caitie Morphew, lead librarian supervisor in the Children's and Teen department at CLP-Allegheny, brought the program there in August 2017 after reading about it in other cities. The Story Hour concept was originally created by author Michelle Tea and RADAR Productions in San Francisco in 2015, before spreading to New York and Chicago and eventually, to Pittsburgh.

The program was exactly what CLP was looking for to expand its programming.

King reads at all Story Hours. He is involved with the program both to promote early childhood education and to show other dimensions of the world of drag.

The goal of the program is to promote literacy and education, but it also expands children's understanding of the gender spectrum. The books read aloud do not focus explicitly on LGBTQ stories, but instead on general concepts of kindness and self-acceptance.

"We know that kids, by the time they're two years old, they've already begun to incorporate gender stereotypes into play,” says Morphew. “Programming that expands gender expression and broadens perspectives supports families and caregivers and gives kids another perspective on how to be themselves.”

There has been some online criticism of Story Hour in Pittsburgh and nationally, but King believes this only comes from ignorance about what it means to be a drag queen.

"It's nothing but a character illusion and it gives you an outlet of expressing just a different portion of your soul which you feel as if you wouldn't have that opportunity to do as yourself," he says.

As a kid, King didn't have an event like DQSH, but feels its existence now can help children feel less alone.

"When I came out personally, I feel that it would've been easier knowing there's so much more out there. There's more like me than I thought,” he says.


For more info and a full schedule of the readings, visit carnegielibrary.org.