Good and evil. Prudery and depravity. The pursuit of knowledge and its unintended consequences. It's been a winning combination over three centuries for Robert Louis Stevenson's The Strange Case of Dr. Jekyll and Mr. Hyde and for its many adaptations -- the first of which hit the stage within a year of its 1886 publication.

Pump up the sex and violence, stir in some modern ambivalence, and you have Jeffrey Hatcher's straightforward, if harrowing, Dr. Jekyll and Mr. Hyde. This 2008 model is the latest version sweeping through American regional theaters. And it opens the (gasp) 35th season of City Theatre with flair, suspense and scads of opportunities for talented actors.

Practically everyone in the cast gets to portray the deliciously nasty Mr. Hyde except the guy playing Jekyll, David Whalen, the literal as well as metaphorical fair-haired boy of Pittsburgh theater. As credible as he is as the priggish do-gooder, the talented Mr. Whalen is much more fun to watch in mad-scientist mode. That this Jekyll is not the apparent Hyde is one of playwright Hatcher's many little ironies. And that the actor is literally pale and physically overshadowed by Hyde is one of director Tracy Brigden's.

Not to downplay the script, but this production is so powerful because the visual aspects so complement and underline the verbal. The color scheme is a spectrum of gray, from nearly black to almost white (i.e. neither pure evil nor unadulterated good), accented by disturbing splashes of ochre. Occasionally we see some bright, cheery colors peeking behind the set, but they're a trick of lighting (an illusion? Jekyll's self-delusion?). And it's all so much fun to look at: Tony Ferrieri's impressionistic set (which doesn't show the teeth marks), Susan Tsu's gloriously Goth steampunk costumes, Joe Pino's evocative sound design and Christian DeAngelis' playful lighting.

The principal (if unprincipled) Mr. Hyde is strongly and sexily played by Kelly Boulware, who also pulls off a couple of very different yet believable secondary characters. Opposite him, as Hatcher's novel take on the play's necessary love interest, is Melinda Helfrich, a sharply drawn portrayal of a mix of murky emotions. Martin Giles switches characters more readily than hats as both vicious Hyde and as wise lawyer-friend Utterson. The ever-versatile Sheila McKenna and Daniel Krell complete the dramatis personae of a dozen-plus. 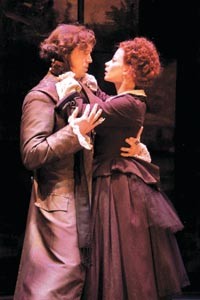