Two weeks ago, alleged shooter Robert Bowers killed 11 people at the Tree of Life synagogue. According to CNN, Bowers blamed Jews for helping immigrants, who he called “invaders,” enter the country.

And today, a similar anti-immigrant, far-right message is making an appearance in South Hills, and given the timing, ostensibly aiming to have an effect on voters.

Dozens of fliers and stickers were placed on light posts, bus stops, and mailboxes all over Brookline, Dormont, and Mount Lebanon with anti-socialist and anti-immigrant messages.

The signs advertised Patriot Front, listed as a white nationalism group by the Southern Poverty Law Center. According to the Patriot Front manifesto, “An African, for example, may have lived, worked, and even been classed as a citizen in America for centuries, yet he is not American.”

The fliers and stickers read "Reclaim America" and “Better Dead than Red” as an apparent denouncement of socialism.

Lori Rice is a health-care worker and Brookline resident who was contacted by a friend about the signs. She posted pictures of the signs on social media. She said they were scattered all over Brookline on Pioneer Avenue, a busy street in the neighborhood. After her social media post, she said many neighbors started removing signs.

Rice said some of the stickers told people to call a number if “they noticed illegals,” apparently referring to undocumented immigrants. Rice said that Brookline has a large Latino and Muslim community and she was dismayed by the anti-immigrant messaging of the stickers.

“It concerns me greatly, especially because we have such a diverse community,” said Rice.

Rice also denounced the “red scare” tactics of the fliers. Over the last week, an anti-socialist campaign has been directed at Democratic Socialist of America member and state Rep. candidate Sara Innamorato (D-Lawrenceville). According to WESA, Innamorato was recently targeted with a death threat. State Sen. candidate Lindsey Williams (D-West View) also was the target of an anti-socialist campaign, with fliers that called her a “radical” and “extremist” because she backed DSA-championed policies like Medicare-for-all.

Rice was particularly concerned about the placement of the signs and the effect they could have on children, given that they were posted near bus stops and an ice cream shop. The signs shared the Patriot Front’s website, which Rice said children could easily visit on their smartphones.

“That anyone would be pushing this hatred especially after what happened to our neighbors is unconscionable,” said Rice. She also criticized President Donald Trump for espousing such strong anti-immigrant sentiments, and feels he is making it easier for people to share these views. “I hate to bring politics into this, because I think it is mostly a moral issue, but our president tends to inflame these people and encourage them to push these messages.”

The South Hills has experience dealing with members of the far-right and white supremacy. Hardy Lloyd, a white supremacist who was jailed last year, walked by a liberal rally in Mount Lebanon and shouted “white power” in 2017. Bowers, who lived in Baldwin, had an extensive history of anti-Semitic and anti-immigrant social media posts. Latin American grocery store Las Palmas was vandalized with anti-immigrant messages twice in the last few years. 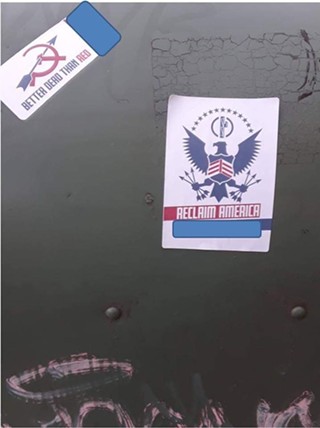 Patriot Front stickers
The South Pittsburgh Development Corporation also condemned the fliers and said the “appearance of white nationalist stickers” is “deeply concerning.” The group issued a statement reading in part: “These messages of intolerance are unwelcome in our melting pot neighborhood, where people of all races, ethnicities, and faiths come together every day to live and work. … In the wake of the terrible tragedy at the Tree of Life synagogue, anti-Semitism and other messages of fearful intolerance cannot be ignored. Politically motivated, fearful messages like these help create such events, but Brookline is not fearful and we will not stand for these messages in our neighborhood.”

Pittsburgh City Councilor Anthony Coghill (D-Beechview) issued a statement on Facebook indicating that Pittsburgh Police have been made aware of the fliers and stickers. Coghill called the stickers “hateful actions.” He encouraged people to share information they have on the fliers with authorities.

“During this time of recent tragedy, District 4 chooses to stand in love and unity with the people of Pittsburgh,” Coghill wrote on Facebook. “Please know that we disavow these hateful posters and believe in a community filled with love.”

In the end, Rice hopes the voters reject the messages of the fliers, and thinks they might actually encourage people to embrace politicians who spread a unifying message.

“Honestly I am hoping that it makes people go vote for people that really care about our country,” said Rice. “I think this will push to people to the side of the people who want to protect everyone and make it safer for every person here.”