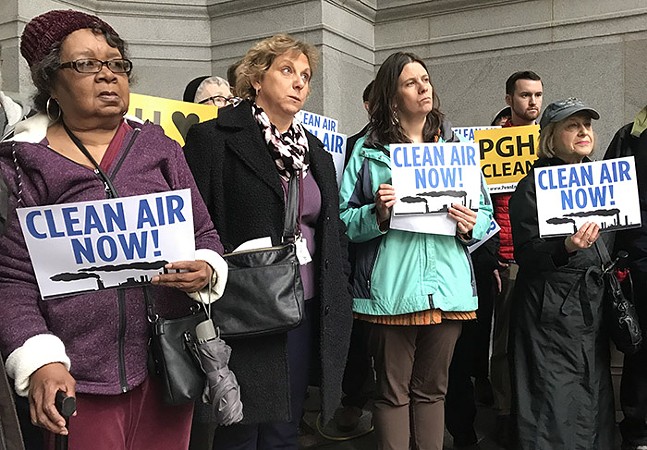 CP photo: Ryan Deto
Air quality protesters at Pittsburgh City-County Building
Over Christmas, the Pittsburgh region experienced an eight-day stretch of poor air quality thanks to industrial air pollution being trapped by an inversion, a weather phenomenon in which a warm air mass tops a cold air mass, thus preventing pollution from escaping higher into the atmosphere.

In response, the Allegheny County Health Department (ACHD) announced last week it would be making efforts to prevent future air-pollution spikes during inversions.

“ACHD recognizes that the increasing frequency of these temperature inversions is associated with climate change. We also recognize that industry isn’t the only contributor to poor air quality as things like vehicle exhaust have a significant impact upon pollution,” said interim ACHD director Ronald Sugar in the press release.

But at a rally today at the Pittsburgh City-County Building Downtown, more than 50 gathered to push ACHD to enforce its air-quality regulations and for the county to update and improve its rules regarding industrial polluters.

Mark Dixon, an independent filmmaker in Pittsburgh, said the county’s air-quality monitoring standards must be improved and that the threshold to mandate action is too high. He said the standards are akin to wildfires and bad days in New Delhi, India (which arguably has the world’s worst air quality).

“Protection of health should be the highest priority of our elected officials,” said Dixon. “We need the ACHD to move at a pace of health, not a pace of U.S. Steel and politicians to take their money.”

U.S. Steel, which owns and operates the Clairton Coke Works, received a good deal of criticism at the rally. The company was blamed for being the largest single producer of carbon emissions in the region and for causing the Clairton area in southern Allegheny County to have several days with the worst air quality in America.


Allegheny County did announce a plan on how to clean up air quality issues following inversions, which trap pollution: https://t.co/krX2rLBHvu

But the crowd is calling for pressure to make sure county officials follow through and also update their standards. pic.twitter.com/qiSL2051J4

Rachel Filippini, director of the Group Against Smog and Pollution, condemned ACHD for blaming the poor air quality on an inversion, since the inversion without industrial polluters wouldn’t lead to poor air quality. She applauded the county for taking action following the eight days of heavy pollution but said the regulations are more than 20 years old and need to be updated to work effectively.

Katie Modic, of the climate change group Communitopia, also spoke at the rally. She moved to the East End in 2017 with her husband and young children. She told the crowd how one of her sons started to develop asthma (Pittsburgh has one of the highest childhood asthma rates in the country, as well as one of the highest rates of air-pollution related deaths in the country.)

Modic implored ACHD to take this issue seriously on behalf of her children and other young people in the region.

“My solution is [that] our Allegheny County Health Department needs to take this seriously,” said Modic. “At the very least, follow [Environmental Protection Agency] regulations. They need to stand with us.”

After the rally, much of the crowd attended the ACHD board meeting, causing the room to overflow with participants. During the meeting, ACHD announced a $107,000 fine against slag processor Harsco Metals, as well as a requirement to make a first-in-the-county upgrade to pollution control, according to Zachary Barber, of environmental group PennEnvironment.