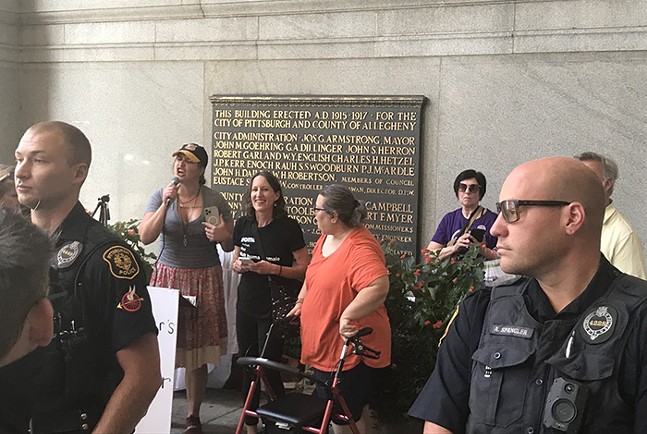 CP Photo: Jordana Rosenfeld
Anti-trans activists, including North Side resident Darian Balcom (center, in black), stand behind a line of police in front of the City-County Building on Fri., Sept. 9, 2022.

Several dozen trans people and supporters convened at the City-County Building this afternoon in a counter-protest against a TERF event scheduled in the guise of a free speech exercise.

TERF is an initialism for trans-exclusionary radical feminist, which is someone who calls themselves a feminist but excludes trans people, particularly trans women.

Counter-protesters displayed a variety of signs including those that read: “Protect trans yinzers,” “LGBwiththeT,” "No TERFs on our turf," and “Fuck these shitty people,” and used instruments, whistles, pots, pans, their voices, and other tools to drown out the TERF speakers.

TERFs "alternate among several theories that all claim that trans women are really men, who are the ultimate oppressors of women,” writes trans journalist Katelyn Burns in her Vox explainer on TERF ideology. “Most of their ideas — like that trans women are a threat to cisgender women’s safety — are based on cherry-picked cases of horrific behavior by a small number of trans people. Above all else, their ideology doesn’t allow for trans people to have self-definition or any autonomy over their gender expression.” Burns also notes that “gender critical” is a common euphemism TERFs use to describe themselves.

RevFoXX, the group that organized the TERF event, gathered in Downtown Pittsburgh as part of a multi-city "Free Speech 4 Women" tour. They are not Pittsburgh or Pennsylvania-based, and their attendance was low. The speakers Pittsburgh City Paper was able to identify are largely from out of town, but there was at least one notable local transphobe present. North Side resident Darian Balcom, who posted on Facebook earlier today she would be attending, was among the TERFs. She is currently in the process of appealing a court judgment that found her guilty of harassing a Black trans teenage girl.

After talking with members of Pittsburgh Mayor Ed Gainey's administration and representatives from the TERFs, at approximately 3:15 p.m., Pittsburgh Police Sergeant Robert Monticelli read a prepared statement into a megaphone, shouting, “This has been going on for about 30 minutes. That’s a reasonable amount of time to exercise your First Amendment rights.”

Police pushed the counter-protesters to the far side of the portico and formed a perimeter around the anti-trans group. While counter-protesters continued to whistle and make noise for about another hour, the TERFs appeared to be live-streaming speeches.

At about 4:15 p.m., 45 minutes before the scheduled end of their event, the TERFs packed up and left through the City-County Building. Counter-protesters rejoiced.

"There is no place for hate in the city of Pittsburgh,” says Gainey in an emailed statement. “Transgender people deserve to live a life of support, deserve to live in a city where they feel welcome and safe, and most of all transgender people deserve our love and protection. Trans rights are human rights and here in the city of Pittsburgh we will do all we can to protect and affirm those rights."