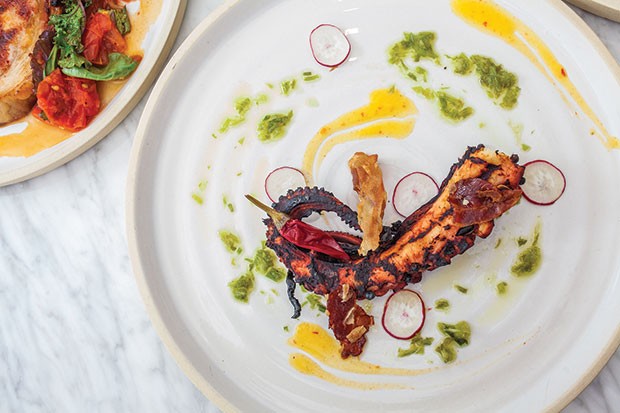 Raise your hand if you remember the Xplorion! A futuristic information hub installed in the lobby of the Alcoa Building when it became the Regional Enterprise Tower, it was, in retrospect, a symptom of a trying-too-hard phase of Pittsburgh’s bumpy transition to a 21st-century city. Now that Downtown, in particular, has got some momentum, the office tower is filled with apartments, and a charming Italian restaurant occupies the former Xplorion’s ground-floor space.

“Charming Italian” may evoke checkered tablecloths and raffia-cloaked bottles, or perhaps cracked plaster walls and candlelight, but Talia — a venture of the Vallozzi family — has pulled off a neat trick in a dining room of unusual proportions. It isn’t very large in floor space — perhaps 20 tables, with an open kitchen on one side and a bar tucked around the corner — but has ample volume thanks to quite tall ceilings and, of course, huge, aluminum-framed windows facing the street. It sounds like a recipe for a bright, modern space, but Talia’s Tuscan color scheme of deep-red piers, charcoal-gray walls and soft-brown upholstery and tables balances brightness and depth, formality and warmth, trend and tradition.

The restaurant’s subtitle is Americano Cucina & Rosticceria, suggesting that Italian authenticity isn’t the core concept. But the cuisine is unmistakably of Italy, though perhaps with a modern sensibility.

Take beans and greens, a dish that we love for its time-honored combination of wilted escarole, firm white beans and savory broth, perfect for pairing with crusty bread. Talia’s menu skips the name, listing just the main ingredients, the “greens” of which has been updated to dandelion. The preparation, too, bore the kitchen’s own signature: The beans were blended into a thick purée that coated other, whole beans and hearty dandelion greens alike. We loved it.

Octopus was served in a distinctly haute manner, with two plump tentacles criss-crossed on a puddle of aioli and haloed with a grass-green ring of thin scallion sauce. Jason found the deeply charred tentacles a bit tough at the ends, but Angelique appreciated their substantial, almost steak-like quality. We both thought the flavor combo of the warm, creamy chili aioli and bright, herbal green onion was brilliant.

Of course, Talia has pizza. But not the kind that permits soggy centers to gain thin, crispy crusts. Our margherita pizza provided substantial crust with every bite. The cooked tomato sauce was a mellow orange and rich, not bright in either color or flavor. Plenty of basil and just enough cheese rounded out the traditional trifecta of Italian ingredients. It gave us strong reason to believe Talia’s other two pizzas — Calabrian and baked clam pizza with preserved lemon and nduja, the spicy prosciutto paste — would be winners as well.

It also wouldn’t be an Italian dinner without pasta, and we ordered two (full or half portions are available). Ricotta gnocchi were plump and pillowy in an assertive sauce of San Marzano tomatoes augmented by piquant Calabrian chilis. Plenty of tender, savory beef brisket and more dandelion greens gave this dish a hearty, robust character. Strozzapretti, on the other hand, was as delicate a dish as a pasta can be. The house-made long noodles were hand-formed to curl over on themselves, as if they’d been rolled around a pencil, and they were pleasingly thick and chewy. Flavorings were perfectly light and simple: butter and cheese, with pink peppercorns  providing a slight floral aroma and subtle kick.

The rosticceria part of Talia’s name refers to the big, red, imported rotisserie visible in the open kitchen, and the source of dry-aged ribeye, free-range roasted chicken and porchetta. The latter is having a bit of a moment: While it’s long been a staple of Italian deli counters, this multi-cut pork feast has drawn some recent notice as a main dish. The original preparation consists of a whole pig deboned, sewed shut, and spit-roasted until full of juices and surrounded by crackling skin. More reasonably, a whole pork loin can be wrapped in a whole pork belly, pairing lean with fat, luscious flesh with crisp skin. Talia’s version was fantastic, a garlic-herb paste at the juncture between loin and belly acting as the only seasoning for a slice that comes out thick and shimmering with juices. It’s one of the best pure pork experiences you’ll ever have.

It’s no wonder that new Italian restaurants are always popping up: From its humblest to its most elevated forms, the cuisine is endlessly pleasing. With its excellent, occasionally strikingly original takes on classic Italian cuisine, Talia is a great place to renew or reinforce your love affair with Italy. 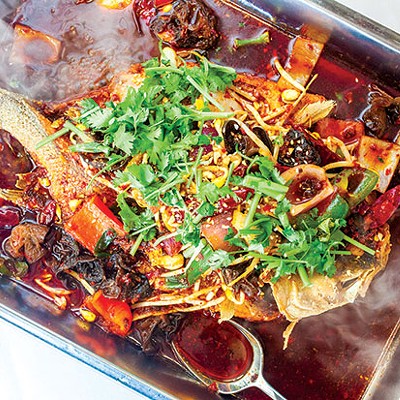