Downtown’s Roost offers a fine-dining experience above its sibling, Revel

Some dishes were a success, but others struggled with too many components 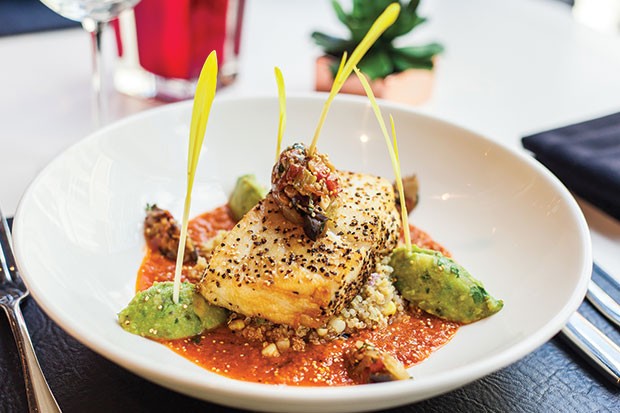 Roost is the upstairs, and upscale, sibling to Revel, a decidedly stylish bar on the fringes of Market Square whose “refined rustic cuisine” left us well satisfied after a visit this summer. We detected a family resemblance in the coolly modern décor, and the current, but not overly trendy, menus of both concepts; but there was very little overlap, save the cocktail list and one dish, shrimp and grits, that is served both upstairs and down. Indeed, the restaurants’ close relationship — one passes through Revel en route to Roost — frees the latter from any obligation to offer more casual fare. Burgers and other finger food have their place, and that is downstairs. Upstairs, at Roost, one finds elegant entrees, sophisticated salads and steaks.

To say that Roost’s offerings sidestep trends is not to suggest that they’re free of the over-elaboration that has recurred in fine dining in recent years. Other than the various cuts of simply grilled steaks at the center of the menu, nearly everything features primary, secondary and tertiary components.

Take the venison pâté en croute, which was a slab from a rather rustic loaf of meat and other ingredients wrapped in pastry. Alongside were condiments, a biting yet herbal tarragon mustard, and a tiny salad of finely shredded celeriac that was, inexplicably, called a remoulade. There was also a long, narrow toast topped at one end with shallot marmalade and the other with chicken-liver pâté. It added up to a lot for one appetizer, but it was both beautifully plated and delicious. The venison was richly flavored, its gaminess cut by bits of sweet dried fruit and enlivened by the pungent condiments. The liver hit some similar notes, but its smooth richness contrasted with the heartier loaf even as the shallots provided sweetness and some bite.

Then there was an entrée of pan-roasted Ora king salmon. The fish was perfectly cooked and straightforwardly seasoned. Such treatment highlighted the native succulence of the salmon, but put it at a loss to compete with the complexity of the rest of the plate: big stalks of rapini, roasted artichokes, brandied apples, sweet-potato soufflé, and brown butter with white grapes and walnuts. Perhaps inevitably with so many components, their preparation was uneven. The artichokes, bigger than hearts but smaller than whole, were difficult to eat and unrewarding, and the rapini lived up to its bitter reputation. The soufflé was unabashedly sweet and tender, perhaps to counter the rapini, but then what were the grapes and apples for? This was a dish in need of an editor.

By contrast, petit filet with scallops was elegantly simple, almost to the point of appearing spartan on the charger-sized plate on which it was served. A four-ounce cut was flanked by a pair of sea scallops, a miniature grilled onion and a single whole small pepper, all ringed with a drizzle of sweet reduction. It was good, with the scallops in particular perfectly cooked, albeit a touch salty. But for the price, we had expected the steak to really sing.

To boost the dish’s vegetable content, we also ordered an a la carte side of Brussels sprouts. They were firm, just this side of underdone, and lacking in the browned-to-a-crisp outer leaves that we love, but tossed with savory bits of chewy bacon.

Shrimp and grits sailed a middle course between simple and baroque. The default delivery of the grilled prawns in Roost’s version of this Southern classic is with their heads intact, but since we’ve found this dramatic presentation makes for difficult eating, we exercised our option to have the heads removed in the kitchen. The headless crescents were served over cheesy grits alongside spicy redeye gravy and some thick chunks of meaty, fatty pork belly. All components were germane to the dish, but the shrimp that should have been its star were actually its downfall: not quite tough, but definitely not tender, and heavily overseasoned. This was exacerbated by the pork, which was fine on its own but contributed to an over-accumulation of salt in each bite which the creamy grits could not ameliorate.

On the lighter side, baby kale salad was still a substantial meal. It was comprised of whole leaves of kale in several colors, studded with little bits of house-made pancetta and sweetened by baked grapes as well as some thin slices of fresh honey-crisp apple. Unfortunately, the salad’s vanilla-pumpkin vinaigrette was too shy to pull together these various bold flavors, so they floundered amid the too-large leaves of kale, which required a knife to render them bite-sized.

In ascending to the fine-dining echelon of Roost, we left behind some of the pleasures of Revel. With good food, in good hands, sometimes less is more.