Downstairs is a story of broken tools and broken people in a dank, unfinished basement | Theater | Pittsburgh | Pittsburgh City Paper 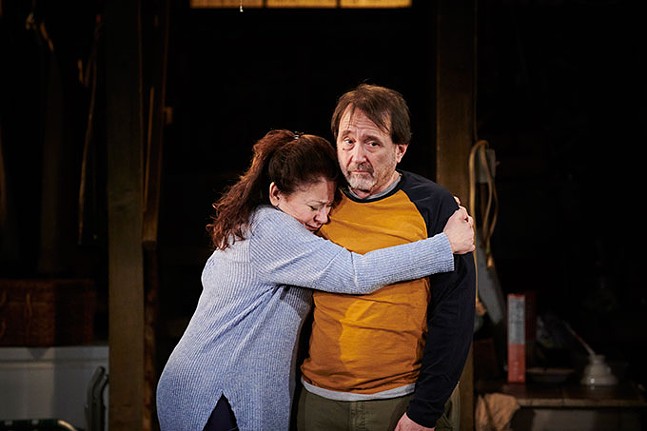 The titular basement in Theresa Rebeck's Downstairs is unfinished, but the amenities are decent. There's a couch with a couple of blankets, a Mr. Coffee, a sink, a little fridge, a shower and a Pittsburgh toilet, and an old PC. This is more than enough for Teddy (Martin Giles), who subsists mostly on corn flakes and stale coffee, but the living situation is less than ideal for his sister, Irene (Helena Ruoti), and her husband, Gerry (John Shepard), who own the basement and the house above it. Teddy has only been crashing there for a day or two when the play opens, but Gerry is already annoyed to have surrendered his workshop and computer area to his peculiar, itinerant brother-in-law, despite the fact that the PC allegedly doesn't work and all the tools are rusted out. Irene just wants the fighting to stop.

Downstairs — directed by Marc Masterson, and running at City Theatre through Sun., Feb. 2 — is a family drama, and like all family dramas, there's a plotful of buried secrets, loaded remarks, and passive-aggression, though less so from Teddy, who has a hard time with tact and frequently blurts out awkward observations. That quality has done him no favors in life and likely played a part in him losing his job, getting evicted, and eventually ending up in a mildewy basement among other dysfunctional objects. He doesn't quite see it that way; chief among the many grudges in the trio's dynamic is Teddy's resentment of Irene inheriting the entirety of their mother's savings, which paid for the house. Irene resents Teddy's resentment; Gerry not so subtly believes his brother-in-law is a dim, unhinged lunatic; Teddy suspects Gerry is a terrible husband and a tremendous prick.

While there's nothing biblical about the family turmoil, the story kept reminding me of the 2009 movie A Serious Man, specifically Richard Kind's character, Arthur Gopnik. Besides the fact that Giles slightly resembles Kind, Arthur and Teddy share genius IQs, sibling dependence, and abysmal social skills. Arthur spent his time building a probability map of the universe called The Mentaculus; Teddy just wants to fix the PC. Where A Serious Man is a story of faith unrewarded, Downstairs is a decidedly smaller, less grim portrait of dependence and trust, but they both deal with people struggling against seemingly unknowable forces guided by unknowable rules. "I just don't understand rules," Rebeck writes in the show's program. "I'm skeptical of all of them."

Teddy, too, can't make heads or tails of the world upstairs, but the play finds glimmers of silver lining in the knowledge that he hasn't stopped trying to understand it. If only he could get the computer to work.