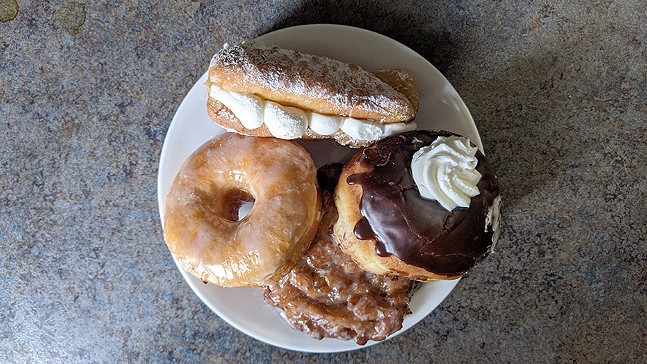 CP photo: Maggie Weaver
A glazed doughnut, hot dog, Pittsburgh cream, and apple fritter from Father & Son Family Bakery
In June of 2019, after more than 40 years, Schorr Family Bakery in Observatory Hills closed. The loss of this long-standing bakery, known for its doughnuts and cakes, was felt by Pittsburghers all over until late fall of 2020, when — thanks to new ownership, Schorr recipes were revived.

The bakery, now named Father & Son Family Bakery, has brought back all of the Schorr favorites and is using the shop’s original doughnut base.

I never made it to Schorr Family Bakery before they closed, so I decided to try the newly-opened version, and, at the recommendation of staff, set myself up with six doughnuts (I gave one away): two glazed, an apple fritter, a Pittsburgh cream, and a powdered bun filled with cream that looks like a hot dog. For $6, it was a steal.

It is worth noting that if you’re planning to get doughnuts from Father & Son Family Bakery, go early. I’ve heard their shelves empty quite quickly; I was lucky, on a Monday morning at 10 a.m., to have such a wide-range of options.

I’ve heard legends of Schorr Family's glazed doughnuts, and I thought I knew what I was getting into, but these blew my expectations away. I could tell just from picking the doughnut up that it was going to be incredibly light; the simply-glazed round wasn’t heavy in my hand. My texture assumptions proved true as the airy dough sprung right back up to its original form after each bite. There was a hint of citrus in the glaze, which was the perfect balance to keep me from feeling the super-sugared rush of an icing-covered pastry.

The apple fritter followed in the footsteps of the glazed doughnut, punching with a cinnamon-spice rather than the heaviness of a sweet icing. Actual chunks of apple peppered the crispy-edged pastry, giving a welcome texture to the slightly-undercooked fritter.

It wasn’t until I got to the two cream-filled pastries, the hot dog and Pittsburgh cream, that I started feeling hints of what I call the “doughnut sweats,” the nausea that follows a morning filled with too much sugar. But even then, I wasn’t overwhelmed. Father & Son Bakery kept their cream airy and delicate, which saved the doughnuts from becoming too rich.