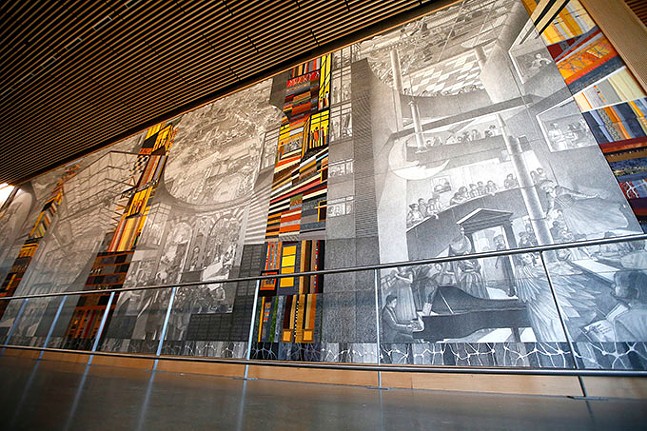 CP photo: Jared Wickerham
"The Collaborative Campus,” by Carnegie Mellon University School of Architecture faculty members Doug Cooper and Stefani Danes, on display outside of the Simmons Auditorium in the Tepper Building

Sit on the mezzanine of the Jaren Cohon Student Center at Carnegie Mellon University, and you are in the thick of the Oakland Squirrel Hill Cultural district and a quintessential Pittsburgh locale.

Sure, there are the distinctive cultural buildings for universities and museums. But perhaps even better are the nearby rolling hills and precipitous overlooks, where aging rowhouses cluster at the land’s edge as if for an event, the raging cauldrons of industry or just the passage of time. All matter of picturesque and utilitarian viaducts strain against the bursting corset of Pittsburgh in its own riparian landscape.

You can’t necessarily see much of the amazing scenery from the inside of this building, which plods through the few neo-Baroque motifs of its otherwise labyrinthine functionality. But three walls of this area around the rotunda are lined with an expansive 150-or-so foot artwork, Carnegie Mellon Campus and Pittsburgh Mural, by architect, artist, and muralist extraordinaire Doug Cooper. The Pittsburgh he portrays in portentous hatched charcoal is correct precisely because of its impossible up-is-down landscape surrealism.

Don’t believe me? Run, don’t walk to the Cohon Center (or a number of other terrific Cooper works in Pittsburgh and internationally). Also, buy the book, Knowing and Seeing: Reflections on Fifty Years of Drawing Cities, available from the University of Pittsburgh Press, just in time for whatever winter holiday lights your candles.

Though Cooper was a longtime colleague and remains a cordial friend, I have zero stake in the fate of this book or any institution that houses his work. It’s just that 23 years after completion of the Cohon Center piece, when even the best artworks might wane amid fashions that undulate more than the South Side Slopes, this one is better than ever, meriting close scrutiny and repeated examination.

Step aside, John White Alexander, with your The Crowning of Labor at the Carnegie Museum, or Vincent Nesbert, painter of Justice at the Allegheny County Courthouse. Cooper’s work has captured a truer portrait of the city and region, not simply because we are flattered by the image of ourselves — so beautiful! — though this is true. Rather, Cooper has embarked upon a career-long rumination on what it means to be with people in a place and to create representations of it by drawing.

That sounds simple enough, and it proceeds in remarkably straightforward fashion through Cooper’s readable book. An early CMU drawing professor, Kent Bloomer, now retired from a nationally significant career mostly at Yale, asked his students to draw the inside and outside of a space on one sheet. Cooper responded with an erudite visual macramé that absorbed and transcended the conventional rules of linear perspective.

CP photo: Jared Wickerham
"The Collaborative Campus,” by Carnegie Mellon University School of Architecture faculty members Doug Cooper and Stefani Danes, on display outside of the Simmons Auditorium in the Tepper Building

The portfolio of masterworks that unfolds — literally as well as metaphorically here, with lavish gatefold pages — can all be traced back to that essential question, says Cooper. Subsequent chapters on Maps, Looking, Pittsburgh, Place and Memory, Murals, and Collaboration provide a methodical framework that leaves the reader on a threshold of feeling either that, yes, it all makes perfect sense, or simply that, like Bauhaus master Paul Klee, the artist can explain policies and practices with admirable rigor, but certain otherworldly talent and ingredients delight our observation while far surpassing our ability to recreate them.

In the most recent pieces, notably City Church City, a 2018 mural for the East Liberty Presbyterian Church, Cooper collaborated with architect, urbanist, and quiltmaker Stefani Danes, who is also his wife.

Just when you thought Cooper’s work had found its apogee of expression, which neither additions nor subtractions would improve, along comes Danes, whose influence energizes and expands to great advantage. Her work is assertively polychromatic and almost completely abstract, though she veers into figuration in response to some of Cooper’s motifs. Both artists engage practices of assembling pieces, visually and physically. There is a wonderful sense of musical counterpoint to their pictorial duets.

Some of Danes’ solo works appear in the book. They resonate with intellectual and emotional depth as well as an ineluctable capacity to delight. She needs her own book as well.

Meanwhile, as antidote to an era of thoughtless architecture, Cooper’s new book of murals and essays reminds us not that we want an imaginary Pittsburgh from a fuzzy, nostalgic past, but rather that we want the Pittsburgh we know as a result of looking, thinking, and collaborating very carefully. And we want the best possible artists to create it.

Knowing and Seeing: Reflections on Fifty Years of Drawing Cities out Dec. 3, 2019 on University of Pittsburgh Press. upittpress.org