Doubt, A Parable at Stage 62

An uneven production of the Pulitzer-winning play 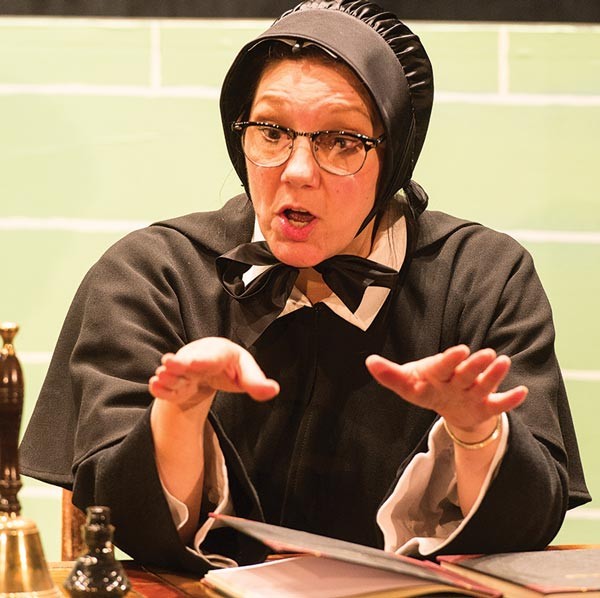 continues through Sat., May 17.

In the sermon that opens John Patrick Shanley's Doubt, A Parable, Father Flynn says, "Only God knows our secrets."

And secrets abound in this drama, the current offering from Stage 62.

Did Father Flynn molest the Muller boy? Why does Sister Aloysius suspect him when there is no proof? Why do Sister James and Mrs. Muller defend the priest?

But perhaps the best part of Doubt is that the riddles are never truly solved. Only God knows.

Matthew J. Rush does a fine job capturing the anguish of the accused Father Flynn, but does not exude the charisma and charm that makes the young priest so popular with the parishioners.

As Sister Aloysius, the principal of the St. Nicholas school, Cindy West provides the correct tone of the judgmental and opinionated nun. At times, however, the combination of her accent, speaking rate and the amplification system garbles some of her lines.

Anna Dorosh brings just the right amount of innocence and sweetness as Sister James, never crossing into saccharine. Dorosh has the challenge of playing the "weak" character, torn between the personalities of Flynn and Aloysius, and she does a wonderful job.

Cheryl Bates-White, while limited to a single scene, gives a powerful and memorable performance. But I think costumer Dustin Wickett short-changed Bates-White a purse and some gloves. This is 1964, and she has been called in for a meeting with her son's principal.

Director JP Welsh has paced the individual scenes well, but the final confrontation between Flynn and Aloysius lacked a cat-and-mouse quality — where the audience is never sure who is the cat and who is the mouse. But on opening night, the balance of power was not a tug-of-war between equals.

While this production is not perfect, Stage 62 deserves credit for attempting such a powerful and thought-provoking play.