Who would have thunk that the cloud raining upon the Rage of the Stage Players would have a silver lining?

Cloud? It was more like a bureaucratic cyclone. The company was ripped from its home, not to say its very foundation, at the South Side's Brewhouse to ride the whirlwinds before landing in the space newly (and almost magically conveniently) vacated by Open Stage Theatre.

And there's poetic justice, if not actual magic, in the happy happenstance that the play thus saved is James Michael Shoberg's new interpretation of Frank L. Baum's The Wizard of Oz. Oh my, indeed.

That's not the silver-lining part, though. Shoberg, Pittsburgh's self-styled striver after "darker tastes in art," usually combines a fixation with sex, drugs, rock 'n' roll and dazzling costumes with cumbersome scene changes and sloppy projections. Forcing the often-rambling style of Shoberg and/or his players onto a smaller stage, much closer to the audience, focuses the production.

Company co-founder and artistic director Shoberg directs, co-produces and works on sound design, costumes -- pretty much every aspect of the show (including the concession stand, for all I can tell). His Dorothy in Oz includes winking references from various versions of the story -- The Wiz as well as generous dollops of the iconic 1939 movie -- as he twists the familiar characters and their journey. The new setting is a psychiatric hospital for the unfortunate Dorothy, here named Dottie. Oh, I forgot to mention that the Rage/Stage fixation on painful puns has not changed.

The most fun comes from Carrie L. Shoberg's glitzy and ditzy portrayal of Glinda, and from the stunning ensemble -- costume, props and performance -- of Brittany Spinelli as the doctor's secretary. The three companions are a mixed bag: Chucky Hendershot almost boneless as he wrestles with gravity and a heroin addiction as a Goth "Skarekrow"; Sean Michael Gallaher appropriately loud as the anger-challenged multi-pierced punk "Rusty Tinneman"; and Joseph A. Roots totally smooth as the repulsive "Harry Lyons." In the title role, Adrienne Fischer is credible and credibly brave, but the character just doesn't have the fun the others do.

The show is lumpy, but it's mostly lumps of fun. Yes, as the tagline on Dorothy in Oz says, "she's not in Kansas anymore." And the Rage of the Stage isn't in its old rut anymore, either. 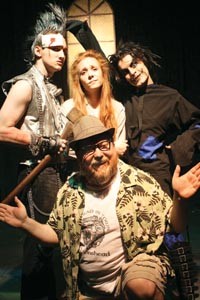