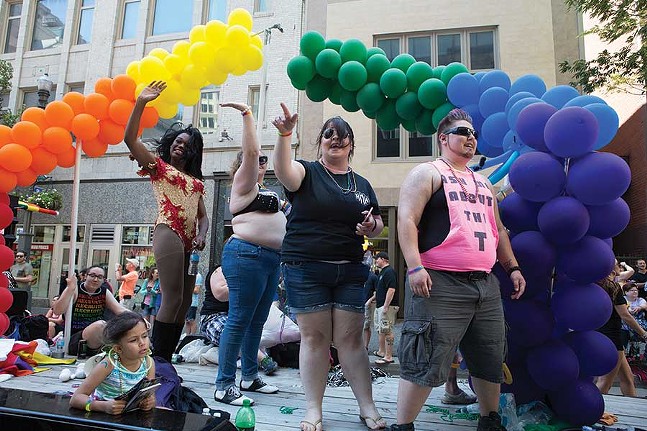 CP photo by John Colombo
Celebrating at Pride in 2016

At this training event, regional media will get information about working with the LGBTQ community. Speakers will include members of the local media and the LGBTQ community. The event is being sponsored by the ACLU of Pennsylvania, Three Rivers Community Foundation and Persad Center, and is being organized by Sequal Consulting and the Pittsburgh Lesbian Correspondents blog.

Stop by the Gay Guy Happy Hour for a free wellness check-up. The Central Outreach Wellness van will be on hand to provide diagnostic examinations, such as blood-pressure readings and screenings for sexually transmitted infections, as well as a PrEP survey.

Join Assemble and Queer PGH for a celebration of LGBTQ artists and makers in Pittsburgh. Assemble is a nonprofit organization that engages the community in science, technology, engineering, art and math through interactive gallery shows and workshops for kids and adults. The work of more than a dozen art vendors will be featured at this event, and guests can screenprint their own shirt or bag for $5. Donations will be collected to support SisTers PGH.

Delta’s weekend activities also include the Rise Up for Our Rights Rally at noon on Sunday, where hundreds will gather at the PPG Paints Arena to hear from local, regional and national speakers and leaders. The theme is elevating the LGBTQ community and causes. Following the rally will be the EQT Equality March at 12:30 p.m. featuring marchers from various organizations and floats.

Those opposed to EQT’s sponsorship of the event are invited to show solidarity by wearing grey clothing and accessories as part of the “Grey Out Rainbow Capitalism” campaign.

This event, starting at the Greyhound Station, was spurred in response to concerns about the EQT Equality March and its organizers the Delta Foundation. The alternative event is being organized by SisTers PGH, a homeless shelter for trans people in Western Pennsylvania. The organization says EQT has a negative impact on the environment and has supported anti-LGBT legislators.

Pride on the Square

Presented by Mayor Bill Peduto’s LGBTQIA+ Advisory Council, this event will feature resources, entertainment, food and more. LGBTQ organizations and allies are allowed to set up resource tables for free. It will feature performances by Lyndsey Smith from the Lyndsey Smith & Soul Distribution, Phat Man Dee and other performers and artists.