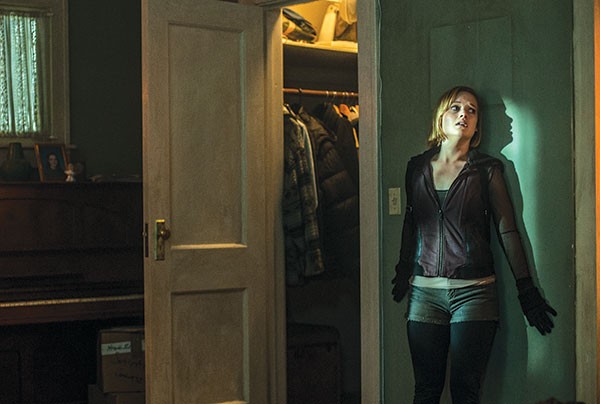 After getting a tip that a reclusive blind veteran is harboring a huge stash of settlement cash at his home in a deserted Detroit neighborhood, three twentysomething burglars see a chance for easy pickings. But in Fede Alvarez’s compact thriller Don’t Breathe, things go wrong from the start.

Once inside, the intruders — including Alex (Dylan Minnette) and Rocky (Jane Levy) — fail to neutralize the unnamed Blind Man (Stephen Lang), and quickly discover he’s a terrifying and surprisingly adept adversary. And for good reason — there is a bunch of cash; his seemingly ordinary house is a locked and barred fortress, and nearly impossible to escape.

Don’t Breathe is stripped-down version of the classic siege thriller: It’s basically three people (and a Rottweiler) trapped in a small space, all operating in kill-or-be-killed mode. There’s no CGI or quippy dialogue, and the film leans more into building tension than deploying jump-out scares.

Alvarez’s camera explores every nook and cranny, shifting around like another nervous character. All that available space initially seems like a plus for the intruders who can see it, but the Blind Man has a next-level spatial intimacy with his home. The sighted do have another advantage (as do the viewers) in noting all the common household objects that might become weapons.

There are nerve-wracking scenes set in the dark (advantage: Blind Man), but don’t expect things to get any less fraught when the lights do come on. And if you think silence is scary, it’s got nothing on an ill-timed creak of the floor.

No spoilers, but the film is also notable for having no clear heroes. Sure, the Blind Man is trying to kill the good-looking young people, but they did break into his house to steal all his money. Viewers may find their sympathies shifting, particularly as events play out. Admittedly, the plot gets a bit baroque in the final third, but the screening audience loved it, responding with enthusiastic gasps and cheers.