Dominican and Cuban flavors round out the menu of Zorros restaurant in Mt. Lebanon | Restaurant Reviews | Pittsburgh | Pittsburgh City Paper 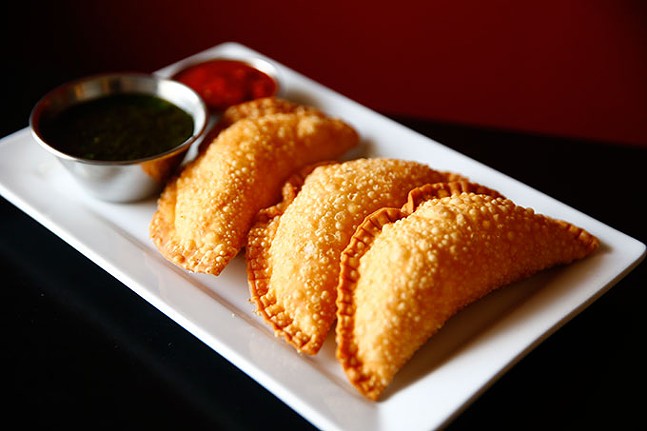 The first Dominican food Samantha Fox made for her husband Jesse was the braised chicken dish pollos guisado. It was a fitting introduction to her cultural heritage and cuisine: a simple entree heavy on flavor and spices but built from a small but reliable roster of ingredients.

These days, pollo guisado is one of the most popular orders at Zorros, the Dominican restaurant opened in Mt. Lebanon by Samantha and Jesse Fox in 2019. Served with rice, beans, and their secret red sauce, it’s a signature dish that represents how the couple approaches their menu: as a representation of their relationship, mixing Jesse’s cooking style with Samantha’s Dominican heritage.


About half of the list is made up of traditional Dominican plates that go back generations (Samantha Fox’s family hails from the Dominican Republic). The rest of the list was dreamt up by Jesse Fox. He’s translated Dominican and Cuban flavors into the chimi burger (a basic burger topped with peppers, onions, slaw, and a house sauce), an avocado salad, shrimp skewers, and his own version of a Cuban sandwich.

Though Jesse makes some tweaks to Samantha’s family recipes, the dishes at Zorros stay true to their original flavor. For instance, all of Zorros’ empanadas are fried, because that’s how Samantha Fox grew up eating them. Jesse Fox has recreated her family’s dough “recipe” — the frozen Goya Foods brand dough — into something he makes in house, from scratch. And it works: The dough was light, crispy, and notably thin. It didn’t overpower the fillings – one beef and cheese, the other yucca and cheese — instead, acted as a booster for the flavors inside.

When it came to the empanadas' sauces, I was reminded of a friend who once told me that food is “just a vehicle for sauce.” Though I rarely agree with this sentiment, Zorros’ empanada sauces made a convincing argument for that stance.

This thought carried over to my tostones, which were matched with a spice-heavy garlic sauce. The oil-based dip had a striking zing from garlic, which balanced nicely with the salty sweetness of fried plantains.


Sancocho, a Dominican soup, featured plantains, yucca, and squash in a chicken broth, topped with a slice of avocado; a dusting of parsley and touch of citrus brightened the basic soup and made it something memorable.

When Samantha and Jesse opened Zorros, it was replacing Jose & Tony’s, a beloved Mexican restaurant that closed its doors in 2019 after a 50-year run. And taking over for an established eatery didn’t come without its challenges: Samantha says that setting Dominican cuisine apart from Mexican has been one of their biggest obstacles. Many diners don’t know the difference between the two and still come in expecting tacos and burritos, neither of which are found on Dominican menus.

But the Foxes are confident Dominican cuisine will find a happy home here. If you try it, you’ll find something to love on their menu. I certainly did.

1. Rum Cake
Hate rum? This is not the cake for you. There are three cups of rum to one cake.

2 .Cocktails
Look for Dominican rum among sangria, margaritas, and more.