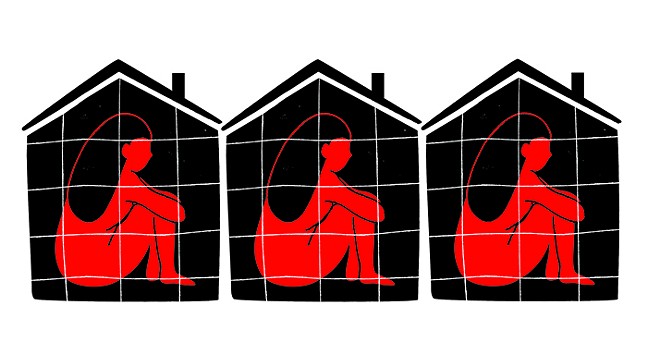 After five months in quarantine, anyone has the right to be annoyed by their family, partner, or roommates. That much time together can drive a rift into even a healthy relationship.

But for some, spending that much time at home can be dangerous. Before lockdown in the U.S., experts predicted that the pandemic would cause domestic violence incidents to increase as shelter-in-place orders and other restrictions would add more stress to already volatile situations.

The Women's Center and Shelter of Greater Pittsburgh noticed an immediate drop in new clients when the lockdown started in March. Each month after, the number of calls were lower compared to the same months in 2019, not because there was a decrease in domestic violence, but because clients were unable to make calls due to lack of privacy and other factors, says the shelter. In total, the Women’s Center and Shelter served around 1,000 fewer new clients in the fiscal year 0f 2019/2020 than they did the year before.

Only in June and July did numbers start to go up and revert to pre-pandemic levels.

"The overall picture is that victims were impacted with their ability to reach out for services during the pandemic, and now that things have started to open up, we are seeing more and more people come for services," says Nicole Molinaro, president/CEO of the Women’s Center. "We anticipate that continuing to increase."

Molinaro says the organization immediately knew there would be a spike in domestic violence, both from seeing what happened in countries where the virus hit first, like China, and understanding the statistics from previous pandemics like Ebola and Zika. In some parts of China, domestic violence reports tripled at the beginning of lockdown from the same period last year. During the Ebola epidemic in West Africa, Guinea reported a 4.5% increase in gender-based violence.

In April, U.N. Secretary-General António Guterres said there had been a "horrifying surge in domestic violence" globally.

"It makes sense. Domestic violence isn't just something that happens randomly. Domestic violence specifically is a pattern of power and control used within a relationship," says Molinaro. "When people feel that the world is out of control, which I think all of us do these days, you try to get back any control you can. So for somebody who uses abuse, or who is controlling, they're very triggered by that."

Molinaro adds that factors that can lead to an increase in domestic violence during the pandemic include the stress of unemployment, food insecurity, and being home 24/7. Additionally, abuse victims are more isolated from friends and family and are often unable to seek help easily.

Once lockdown hit, the Women’s Center and Shelter fast-tracked tools so that clients could contact them and get help in whatever method fit their situation. The organization has been delivering some of its services, like support groups and therapy, over the phone, by text, or through online chats. Other services, like its shelter and services for children, continue in-person with COVID-19 protocols in place. Clients have also been using RUSafe, an app launched by the Women’s Center and Shelter a few years ago, which assesses a person's danger level and provides resources.

Because buying food is one of the few tasks people still do regularly, the Women’s Center and Shelter and other local shelters and organizations have partnered with Giant Eagle and the Greater Pittsburgh Community Food Bank to pass out flyers and postcards with information about contacting shelters, Pittsburgh Action Against Rape, gun storage safety tips, and other resources.

As the lockdown continues, albeit with looser restrictions than a few months ago, Molinaro expects calls will continue to rise, and hopes that people continue to support domestic violence victims and programs, despite quarantine fatigue.

"We want to encourage everybody to still continue to support the victims in their life, and continue or start to support your local domestic violence program in whatever way is needed because we will definitely continue to need the support," says Molinaro. "That's all that has gotten us through this."