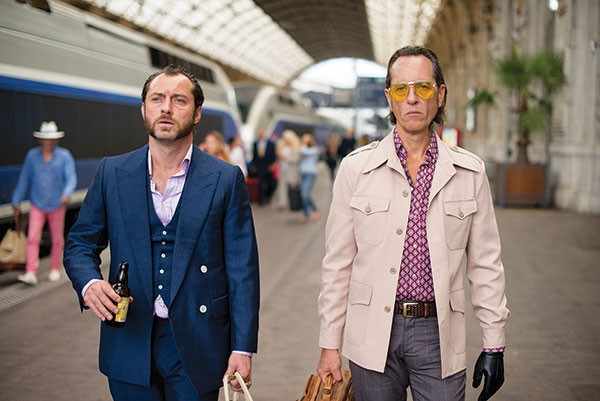 The new British dark comedy Dom Hemingway offers a catch-up with one of those flashy, mouthy villains from one of those flashy, word-packed '90s crime thrillers. Except now our titular anti-hero — just out of prison after 12 years — is moving a bit slower, and the film with it.

I don't miss all that jumpy rizz-razz, and director Richard Shepard only occasionally indulges in a bit of cinematic winking (dryly funny intertitles, and a slo-mo party scene). But these flourishes are almost as nostalgically quaint as the 1980s and '90s pop tunes that give the film some bounce. (Dom leaves prison in an ill-fitting suit to the cheesy strains of The Alarm's "The Stand.")

The plot is simply Dom (Jude Law, with a few extra pounds) trying to get his groove back. He meets his old buddy (Richard E. Grant), and hits up the crime boss (Demain Birchir) for his payout. He also hopes to reconnect with his daughter (Emilia Clarke, Game of Thrones' Khaleesi), and maybe get a new safe-cracking gig. Most of it goes comically awry, with Dom vacillating between self-destruction and self-improvement.

It's mostly a showcase for Law to unleash blistering streams of words, most profane. Like Deadwood's Al Swearingen, this is a low-rent bad guy with an astonishing facility for soliloquies and poetically vulgar takedowns. (Dom dismisses the scenery of the French countryside as looking "like a barmaid's snatch after a World Cup weekend.") It's amusing but it all feels a bit slight, with much of the extravagant dialogue recalling the archness of a post-modern gangster flick rather than lived-in realness.

But Grant is never not funny, even playing the slightly dour straight man here. Law seems to relish playing somebody other than his usual well-coiffed and well-bred playboys and lawyers, and his fun is infectious enough to keep this bubbling along.