CP photo illustration
On Sunday, the Allegheny County Democratic Committee met to vote on its annual endorsements. The process is meant to distinguish which candidates align most closely with ACDC; whoever wins the endorsement gets their name placed on a slate card that the party sends out to voters before the April 28 election. The endorsements don’t always ensure victory, but they do act as the Democratic Party’s official backing during the primary, when Democratic voters might be looking for guidance on which Democrat to vote for.

The meeting is held every year before Pennsylvania’s Primary Election, but Sunday's vote was unlike any in recent memory. An outspoken incumbent, state Rep. Summer Lee (D-Swissvale), who is also western Pennsylvania’s first Black woman state representative, was passed over in favor of North Braddock council member Chris Roland. Many Democrats were upset with that choice — Democratic voters overwhelmingly voted for Lee against a longtime incumbent in 2018 — and Roland’s financial support is mostly from the energy industry and the trades unions that support it.

There was even more vocal outrage that ACDC backed candidate Heather Kass (D-Carrick), who has a history of public support for President Donald Trump and opposition to the Affordable Care Act. Kass was endorsed over Jessica Benham (D-South Side), who has racked up support from several local Democratic leaders and grassroots organizations.


I also agree and another compelling reason for the Allegheny County Democrats to end its endorsement process. https://t.co/cwj4kU9PlF

The backing of Kass showed that even recent support of the head of the opposition Republican Party, and opposition to Democrats key legislative achievement of that last decade, is not enough to dissuade a significant number of Allegheny County Democratic committee members.

In fact, there are some signs that Trump support is actually accepted within the county Democratic committee, even though Trump frequently disparages area Democrats.

Photo proof courtesy of @bethanyhallam, who is at the endorsement meeting pic.twitter.com/fxb0AbXT9Z

Allegheny County Councilor Bethany Hallam (D-Ross) is a committee member. She didn’t get to vote for the endorsements of Benham or Lee, since only committee members who live within each district vote for those corresponding candidates. But she questioned the votes for candidates like Kass who have a history of supporting Republicans like Trump.

“The Republicans have their own committee,” says Hallam. “We don't need to be doing that work for them.”

Hallam says there is a DINO (Democrat In Name Only) problem within ACDC. She doesn’t know how many Democratic Committee members support Trump, but she has heard that there is more support than is known to the public.

Pittsburgh City Paper found at least one committee member with open Trump support. Jeffrey Anesin is the chair of Pittsburgh 24th Democratic Ward and lives in Troy Hill. His personal Facebook page shows him wearing a Trump cap in a bar with the caption “Trump Train 2020.”
The Facebook page has the name “Bean Anesin” and describes him as a retired bar owner. A WPXI report shows Anesin talking about his former bar in Troy Hill and identifying as Jeffrey. Pittsburgh City Councilor Bobby Wilson (D-North Side) confirmed this was Anesin in a tweet. 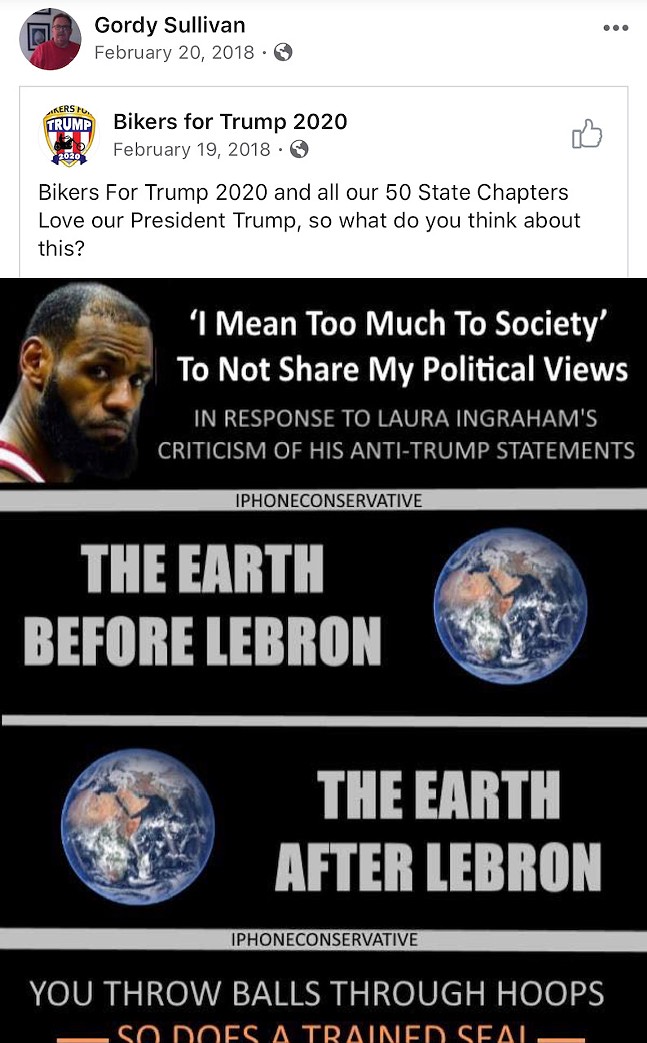 Screenshot taken from Facebook
Last December, a Democratic Committee Person from Ross named Richard Sayers shared a post from the conservative pro-Trump group Turning Point USA that interviewed people in California that didn’t believe Trump should be impeached. Over the last several months, Sayers has shared several conservative memes, posts condemning Democratic politicians like Ilhan Omar (D-Minnesota) and Alexandria Ocasio-Cortez (D-New York), and a story from the Epoch Times, a pro-Trump news site that peddles in conspiracy theories. Sayers does have a few posts advocating for local Democrats in 2018, but he hasn’t posted anything supporting Democrats in several months.

Hallam thinks this is a part of a larger problem within the ACDC. She thinks the committee is too tolerant of Trump support, even though the ACDC bylaws prohibit support for the opposing party. She says it's significant that a person, even if not a current committee member, can show up to the ACDC endorsement meeting wearing Trump’s signature campaign hat.

Jim Burn, a former ACDC and PA Dems chair who is no longer officially with the party, couldn’t say if he thinks there is a problem of Trump supporters sitting on ACDC. But he did say that if there are Trump-supporting members, they need to be removed.

“If they do, they need to fix it,” says Burn. “If there is Trump virus, they need a vaccine.”

In October, when Burn was with the ACDC, he warned that committee members who wanted to support independent challengers to Democratic nominees could lead to “Democrats for Trump” groups inside the ACDC.

Burn says the process is to make a complaint to the party and that the party would do its own vetting of the complaint to ensure due process. On Twitter, Hallam indicated that she issued a complaint about Anesin, whose Facebook profile picture read “Trump Train 2020,” to the ACDC.

ACDC didn’t return a request for comment for this story. In a comment following controversy over the endorsement of Kass and Roland, ACDC chair Eileen Kelly said, “Each candidate had two months to seek the endorsement. Often times losers complain. They had a fair shot just like everyone else."

Hallam is also concerned about the messaging involved with endorsements within the ACDC. She criticized Allegheny County Executive Rich Fitzgerald for his tactics in whipping endorsement votes for Roland. A video on Facebook shows Fitzgerald saying, “I will not be supporting a socialist” at a Wilkins Township Democratic gathering. Hallam says Fitzgerald used similar rhetoric to voters in McCandless and several other locations.

Lee is a self-described Democratic Socialist, like Sen. Bernie Sanders (I-Vermont), and worked with the Pittsburgh Democratic Socialists in the past before experiencing a falling out with the local group. She has since started her own political-action committee called UNITE.

But Hallam thinks that Fitzgerald is using the term “socialist” more as a scare tactic. In 2018, Fitzgerald helped negotiate a package that would have given the tech giant Amazon $9.7 billion in tax breaks and incentives in an effort to bring the company’s second headquarters to Pittsburgh. It was likely the largest incentive package that any U.S. region offered to a private company in history.

Hallam thinks Fitzgerald’s real opposition to Lee is that she is outspoken against fracking, and that he sees Lee’s advocacy as a threat since he is very pro-fracking.

“Fitzgerald and the establishment are scared of the progressive wave that has been building,” says Hallam. “I think it caused him to slip up. He is very smart, but he is not seeing the future. I think he sees his power grip in Allegheny County slipping.”

Burn also thinks Fitzgerald made a mistake in whipping for Roland, citing Lee’s impressive victory over Paul Costa in 2018 as the reason why Lee represents what the voters of the district want. Lee received 69% of the vote in the 2018 primary, even though Costa was a 20-year incumbent and backed by the ACDC. Burn also notes that several of Fitzgerald’s endorsed candidates have lost elections over the years.

“I think [Lee] is going to win the day,” says Burn. “A Rich Fitzgerald Primary endorsement is the kiss of death for a primary campaign.” Burn recently endorsed Benham and Lee.

The Fitzgerald campaign didn’t return a request for comment for this story.

In the end, some ACDC members see the issues over this year’s endorsements as an opportunity to fix some factions that exist within the committee.

Committee member Megan Zirkel attended the endorsement meeting on Sunday. In an email to City Paper, she expressed disappointment in the results of the meeting and with the alleged actions of Pittsburgh City Councilor Anthony Coghill. As first reported by WESA, Coghill was allegedly whipping votes for Kass, despite the fact that he rescinded his endorsement of Kass after her past pro-Trump social media posts were revealed. Coghill denied those accusations.

Regardless, Zirkel believes that a larger conversation needs to be had about the purpose of the committee.

“Is it literally just to attend one endorsement every year and vote for whoever the Ward Chair tells you to vote for?” writes Zirkel. “Or should we be having regular meetings discussing the advancement of the party and creating a system in which we actually vet our applicants while collectively educating ourselves about their qualifications? We should be making candidates earn this endorsement and the accompanying benefits.”

Hallam is currently gathering signatures to hold a full committee meeting, where members will be forced to vote on decisions regarding the future of the ACDC. She says she currently has over the 400 signature threshold to call the meeting, but is gathering more for insurance.

“I want every committee member in the county to show up and say what is working and what is not,” says Hallam. “This is a perfect example. Have we lost relevance since we are allowing some Trump supporters to take over committees?”