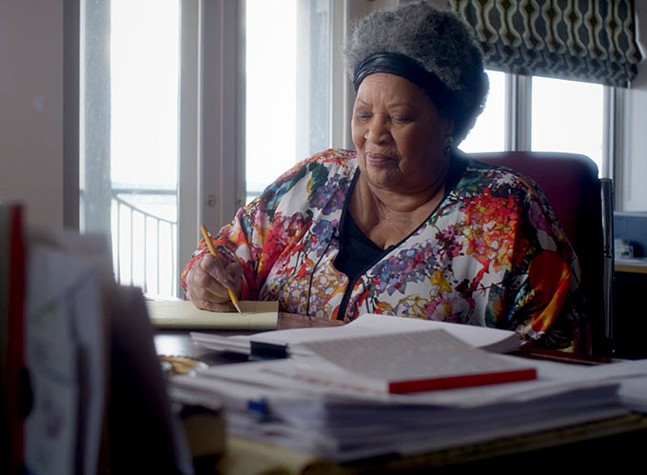 Photo: Timothy Greenfield-Sanders/Courtesy of Magnolia Pictures
Toni Morrison: The Pieces I Am

The day she found out about winning the Nobel Prize in literature, Toni Morrison was asked by a reporter what sets her apart from her peers to win such an esteemed prize. “I think I write well,” she says, without skipping a beat. It’s more fact than opinion. Toni Morrison writes well. Very well. Maybe better than anyone else, living or dead.

A new documentary, Toni Morrison: The Pieces I Am, reinforces this fact over and over. It features several interviews with Morrison, but also her friends, peers, and admirers gushing over her brilliance. Oprah, for example, recalls being so infatuated after reading Beloved that she called the fire department in Morrison’s town to get her number. It’s a love letter to her genius, the kind that is often made after the subject’s death and tinged with sadness. Instead, the film feels very alive, just like Morrison herself.

Spanning from her childhood in Lorain, Ohio, through her career as a prize-winning novelist, the documentary explores Morrison’s career and place in the literary canon, but also the prevalence of the white gaze in literature and how she worked outside of it. She grew up in the 1940s in a town without enforced segregation and went to college at Howard University, an HBCU.  She saw “whites only” signs for the first time in D.C. and colorism among the college’s sororities. She graduated, started teaching, got married, had kids, got divorced. She became an editor at a textbook publishing company, and then an editor at Random House where she nurtured and published a generation of Black authors, including Angela Davis and Muhammad Ali.

While working as an editor and raising two kids on her own, Morrison wrote her first novel, The Bluest Eye. She kept working as an editor and notes in the film that she didn’t even start calling herself a writer until the publication of her third novel, Song of Solomon. While her critical acclaim is now universal, the film makes it clear that white critics didn’t accept her so easily. With the publication of her second novel, Sula, a critic at The New York Times praised Morrison’s talent, but lamented the way she wrote only about Black life, calling the subject “narrow.” Literature professor Farah Griffin says in the film that Morrison “questions that perspective, that you are only defined by what your oppressor thinks of you.” In an archival interview, Morrison calls racism “something distorted about the psyche” and a “profound neuroses.” It’s a sickness that damages the minds of perpetrators as it does its targets.

In avoiding the white gaze, Morrison notes that she writes specifically for Black audiences. This doesn’t mean that white people can’t read or enjoy her books, just that they’ll have a harder time doing so if they don’t like reading stories outside their own world, or are uncomfortable with Black life having depth, or fear examining their own whiteness.

It’s a bit ironic then, that the film’s director, Timothy Greenfield-Sanders, is a white man. He acknowledges this in an interview, saying that Morrison’s trust in him — the two are longtime collaborators and friends — made him feel qualified. And his photographic eye is evident in the film, as interviews with Hilton Als, Walter Mosley, Oprah, Sonia Sanchez, and others are interspliced with street photography to give context to different eras (slavery, segregation, New York in the 90s), photos of Morrison throughout her life, and pieces of art from Mickalene Thomas, Kerry James Marshall, Kara Walker, Jacob Lawrence, and more. In addition to giving more visual interest to a documentary that consists mostly of interviews, the art puts Morrison’s work in the context of other artists who were responding to the same subjects in different mediums.

It’s difficult to put together any coherent words about Toni Morrison, since she is such an expert at words herself. But The Pieces I Am succeeds in putting together a necessary documentation of her life and impact.
__