In the jazz canon, few musicians are as highly regarded as tenor saxophonist John Coltrane 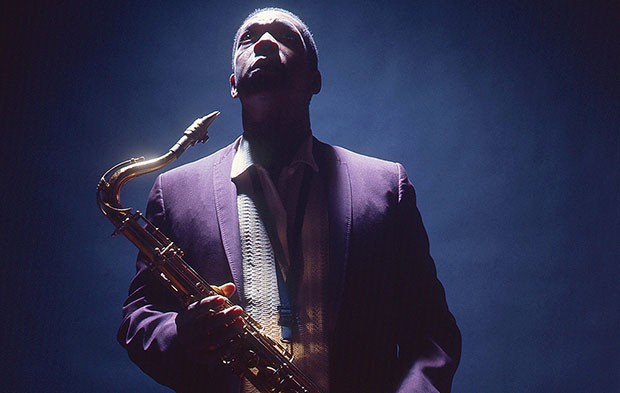 Photo courtesy of Chuck Stewart
John Coltrane, from Chasing Trane
Both films will screen May 26 through June 1 at the Hollywood Theater, 1449 Potomac Ave., Dormont. For times, call 412-563-0368 or visit thehollywooddormont.org.

The main challenge in producing a documentary on jazz artists is choosing the best way to frame the story.

How should a director discuss an artist’s life and music? Does the straight biography or the artist’s mythology take precedence in the narrative? When discussing the music, a technical approach can lose casual fans, while metaphors can digress into ridiculous descriptions. It’s hard to tie both parts together in a manner that shows why the subjects are worthy of such attention in the first place. Two new documentaries screening locally attempt to find that balance.

In the jazz canon, few musicians are as highly regarded as tenor saxophonist John Coltrane. From his classic recordings with the Miles Davis Quintet to his own diverse work as a leader, he exemplified the best aspects of jazz, constantly pushing himself toward greater heights as an improviser, unafraid of any backlash from listeners or critics. Fifty years after his death from liver cancer at age 40, he is still revered by musicians of all stripes. Chasing Trane, directed by John Scheinfeld, peels back the layers of the Coltrane mythology through interviews with numerous biographers, peers, children and fans.

The film succeeds because not only does it give a relatively linear storyline of Coltrane’s life, it discusses the background that shaped him — from the Southern preachers in his family to fellow saxophonists he met in Philadelphia to the civil-rights movement. The latter topic presents one of the film’s most harrowing moments, playing Coltrane’s deeply meditative “Alabama” atop footage of the aftermath of attack on Birmingham’s 16th Street Baptist Church, where four girls were killed in 1963.

While Chasing Trane could have digressed into a succession of talking heads, most of them offer insightful commentary. So, balancing Carlos Santana’s hyperbolic thought that Coltrane’s sound “rearranges molecular structure,” Japanese Coltrane obsessive/author Yasuhiro “Fuji” Fujioka sums up the saxophonist’s power easily: “He makes me happy.” Spliced with live footage of Coltrane’s “Classic Quartet,” pianist McCoy Tyner (the only living member of that band) says Coltrane made his bandmates believe they were put on earth to play their brand of energetic music. When the film cuts back to a young Tyner banging out an aggressive solo, it’s clear these aren’t just words.

Denzel Washington voices Coltrane’s thoughts, reading quotes from interviews and album notes, without getting heavy-handed. Snippets of home movies also present a more relaxed side, with the saxophonist playing with his family, dancing around his yard and smiling, away from the scrutiny of fanatical followers.

In the end, Chasing Trane offers a strong enough story to those new to the saxophonist’s life, while presenting it to the die-hard fans in a way that keeps it exciting. (The late-period footage of the Newport Jazz Festival is especially valuable.) And any chance to hear fellow saxophonist Sonny Rollins (himself very much a musical guru) speak is valuable. His thoughts, together with those of Coltrane biographer Ashley Kahn and the dynamic philosopher Cornell West, make the film even stronger.

Trumpeter Lee Morgan also has a good deal of mythology surrounding him. He became one of the top musicians in the hard-bop style of the 1950s and ’60s, virtually making that style commercially popular with his funky hit, “The Sidewinder.” In 1973, at age 33, he was shot and killed between sets at the rough New York bar Slug’s Saloon. The shooter was his common-law wife, Helen.

I Called Him Morgan, a film by Swedish director Kasper Collin, is a film as much about Helen Morgan as it is about Lee Morgan, and how their lives intertwined. Growing up in North Carolina, Helen eventually moved to New York, befriending musicians and artists, taking care of anyone who needed a meal or shelter. Dizzy Gillespie hired the precocious 19-year-old Lee Morgan for his band, and he quickly rose in popularity, becoming a leader who recorded numerous albums for Blue Note Records, including Coltrane’s Blue Train.

The film doesn’t give specifics about his career (“The Sidewinder,” which turned the corner for his label commercially, isn’t even mentioned). It also mentions very little about his social activism in his final years. But it includes excerpts of his music, live footage, and numerous photographs taken at recording sessions.

Lee Morgan’s peers tell his story, a list that includes bassist Jymie Merritt and saxophonists Bennie Maupin and Wayne Shorter. The latter forgoes his usual elliptical delivery in favor of more linear stories. When Morgan was at his lowest, Helen took him in and helped him overcome his addiction and start playing again. From then on, they were inseparable. When another girlfriend entered the picture, Helen’s pride took over and she shot him. The act surprised all involved (including the killer, it seems). But unlike most stories of musician’s girlfriends, Helen was adored by all who knew her, even — as the film conveys — after the killing.

The recurring plot device in I Called Him Morgan is an audio interview with Helen. After pleading guilty to second-degree manslaughter and receiving probation after a reduced prison term, she eventually moved back to North Carolina. Captured on a squeaky cassette, her voice reveals the church lady she has become, speaking matter-of-factly about her life with Lee and how it unraveled. Ironically, she died a month after the conversation, in 1996.

Collin’s pacing frequently veers toward the overly dramatic. Much tension is created by re-enacting the snowstorm that hit New York the night of the murder. “Search for the New Land,” a meditative, flowing piece by Lee Morgan, is used to create suspense repeatedly. But ultimately, Collin takes what seems like a simple story of love, jazz and murder, and shows how there were more pieces to the puzzle. Best of all, it compels one to find Lee Morgan records to rediscover his bright, inventive playing.