Do yourself a favor and spend your cold, Pittsburgh winter with this Danish porridge 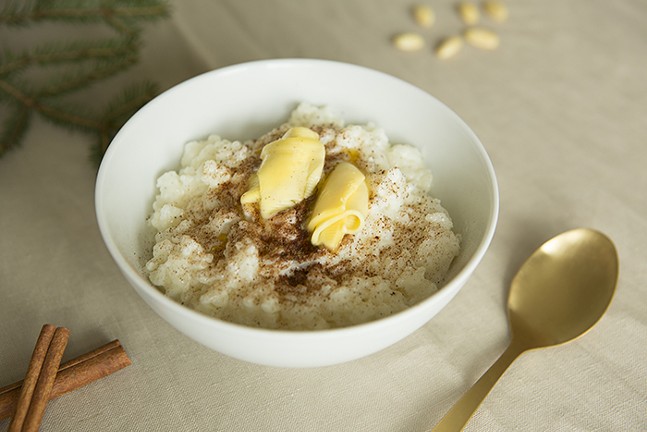 I often look at food as a necessity, not a comfort. I joke that, should the absolute downfall of society happen, I'd be the first to disappear into the woods, living out my post-apocalypse life eating bugs and edible weeds.

Then I came upon an Atlas Obscura article titled “The Danish Christmas Porridge That Appeased a Vengeful ‘House Elf.'” Part of the website's Home-Cooked Holiday series, the piece, written by foods editor Sam O' Brien, covers how, over the centuries, Nordic people looked for ways to please the nisse, a small house elf that attached itself to a family and helped them survive the long, harsh winters by looking over their farmstead.

But, as the article points out, there is a catch.

“Keep your farm’s nisse happy, and he’d make sure your milk stayed fresh and your livestock remained healthy,” it reads. “Disrespect him, and you might find your cow dead in the morning.”

One way they kept their poor cows alive was by making the nisse Risengrød, a porridge made of rice, which has also been called Danish rice pudding. The recipe is almost ludicrously simple, the main ingredients being whole milk and short-grain rice. (Though I have yet to delve into it, I'd be curious to see if a vegan version exists, maybe subbing the dairy out with a coconut or almond alternative.)

While I equated porridge with gruel, a meal only old-timey prisoners and cult members eat, the pictures looked so tempting, I decided to try it. Following the instructions, I slowly boiled the rice (I chose Arborio) in simmering whole milk, consistently stirring for about 30-40 minutes. The final result began to take on a paste-like consistency, which loosens once you dish it out and add the required pat of butter. It also calls for cinnamon and sugar, though in my case, I subbed out the sugar with honey.

I took my first bite and serotonin surged into my brain. “This is the food version of a mother's unconditional love,” I thought. It was hygge turned up to 11.

I was convinced that should I fall asleep at that moment, I would be magically transported to a Narnia-like land where a friendly satyr and I would lounge in a Jacuzzi filled with hot coffee as we watched The Great British Baking Show on a big-screen television.

In a time that offers so few comforts, we must create our own comfort. This has become a hard-learned lesson over the years, with the pandemic amplifying the need more than ever.

So this holiday, embrace your inner temperamental house elf and try a hot, steamy bowl of Risengrød.